Cornwall under 11 badminton team lost to close neighbours Devon 27-9, in the second fixture of the season on 20th January 2013.

As in the previous match against Avon, Cornwall fielded 3 of the required 6 under 11 girls and therefore conceded 12 rubbers automatically. However, Ellie Reed, Katie Phelps and Alice Pritchard from the Cornwall U13 squad kindly played to ensure a full team. The match provided debuts to Molly Pritchard and Ethan Walsh. 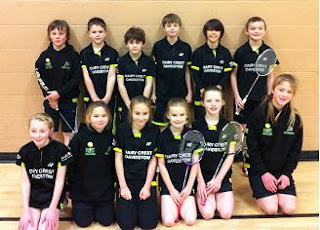 The singles events provided some excellent match play and following several close games, Harry Dyer managed to win for the boys in the third berth. Ethan Walsh responded well to his first taste of county badminton losing in two close ends, despite only starting the sport in October 2012. Cara Collins and Charlotte Freer won their respective singles rubbers for the girls both in three ends.

Building on a recent level doubles gold medal, Charlotte Freer and her partner Cara Collins continued their good form into the level doubles with all their rubbers lasting the three ends and successfully wining one rubber. Under 13 pairing of Ellie Reed and Katie Phelps won all their rubbers but unfortunately the games had to be conceded. Eight year old Molly Pritchard making her Cornwall debut played with her older sibling Alice and really responded well to the challenge with a positive attitude and the game play to match her smile.


Building on their recent silver medal success, level doubles pairing William Freer and Harry Dyer comfortably won two rubbers with their determination and all round power play. The new pairing of Sam Hammersly and Adam Hobbs played exceptional well in all events, eventually wining one rubber. Adam really lifted his game and reaped the rewards for his hard work. Another new pairing consisting of the quickly improving Sam Phelps and Ethan Walsh, who both used their natural athletic ability to cover the court and play with great determination in all the games. These boys are really stepping up the standard.

With the match won by Devon going into the mixed doubles, recent medal winners, the Charlotte and William Freer and Cara Collins and Harry Dyer combinations were both successful in their matches, comfortably defeating their Devon counterparts.

Whilst Cornwall lost the match, the team has made significant progress since the last game and the team can feel encouraged for the final match against Dorset in March.

Several players could have won the player of the match, but it was awarded to Cara Collins for her hard work and consistent game play in all three events.

Posted by Cornwall Badminton at 19:07