The Get Active Cornwall website is featuring badminton as it's activity of the month. Go here to see full details:

www.getactivecornwall.co.uk
Posted by Cornwall Badminton at 20:34

A Bonanza of Badminton in Penryn

An excellent day’s badminton for nearly 60 players from all over Cornwall and Plymouth took place in Penryn College’s impressive sports hall on Saturday 16th October.

The event, promoted and run by Cornwall County Badminton Association, was for social and league players to have a chance to play competitively in a tournament against new opponents, and it was a great success.

Tim Jones, Badminton England’s Regional Development Officer, was on hand to thank everyone, and to encourage local players to attend a meeting on 25th October at 7pm in Penryn, to discuss setting up a new league club to promote badminton in the Falmouth and Penryn area.

Winners and Runners up of the Bonanza – 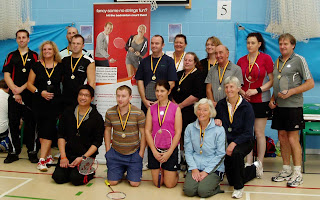 Posted by Cornwall Badminton at 19:42

The Newquay Cup is an annual mixed doubles tournament. The tournament is handicapped, meaning it is suitable for players of all standards, from club to county level.

The tournament has been traditionally open only to the Mid-Cornwall league players, but the event this year is now open to all who play in the West Cornwall league as well.

The Newquay Cup will be held at 1pm on Saturday 13th November, at Newquay Sports Centre.

Entry forms are available from the download panel to the right of this article, and the closing date is 11th November.
Posted by Cornwall Badminton at 08:55

NEW SEASON BEGINS WITH A BANG! 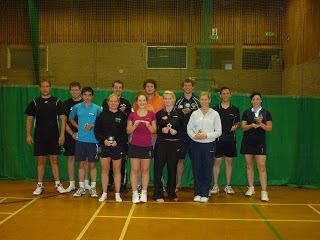 Over half of the players came from Cornwall Youth Badminton, showing their skills and commitment to their older counterparts, and indicating how healthy the Cornish game is.

The mens singles draw was a close fought affair, with 2 seeds, Guy Michell and Lee Bottrill, losing to Ross Lashbrook and Shane Maton, in 2 thrilling, long games. Lashbrook went on to push the top seed, and defending champion, Kelvin Edwards close before losing in the semis. The final lived up to its promise, with James Whetter, Cornwall’s number 2, attempting to regain the crown he’d held for many years back from Edwards. There was little to choose between them, as they held a game each going into the final end, before Edward’s consistency paid off as he finally won 21-19, retaining his champion status.

In the ladies, Jo Philp dominated the singles, beating Emily James in a repeat of the previous year, with the same result of Jo remaining county champion.
Jo then went on to win the ladies doubles, with her partner Rachel Irish, as top seeds comfortably seeing off the challenge of Emily James and Bronwen Wotton in the final.

For the mens doubles, no-one could match the power of Whetter and Michell, as they cruised to victory over Edwards and Tom Lyle, winning back the title they had lost last year.

The mixed doubles saw an upset with seeds Lyle/James beaten by Julian Cooper and Eve Robertson in the quarter finals, but they were no match for Edwards and Wotton who went on to the final. They met Whetter/Philp who had narrowly beaten Lashbrook and Jan Santillo in an exciting semi final. The last final of the day gave another victory for Edwards, with Bron Wotton edging out Whetter/Philp.

Winners of the plate competitions were: