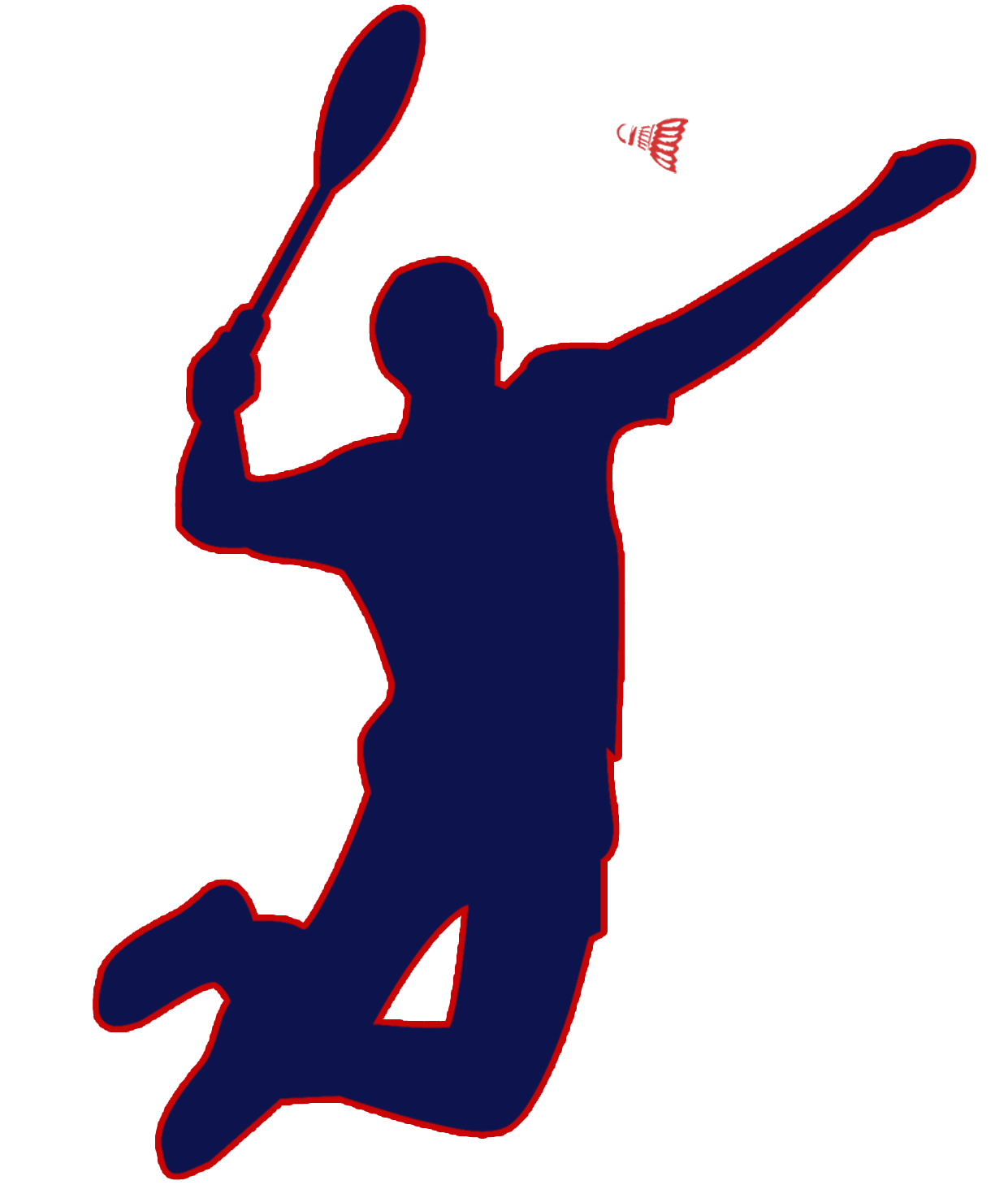 Who will be the best in the West?

**This tournament is purely for players who are members of an affiliated club in the WCBL, and who have played at least once in the league that season**

Last weekend saw Cornwall’s top badminton players compete in the final weekend of the inter-county competition run by Badminton England to finalise the promotion and relegation places.
Bristol -
The 1st team spent the weekend in Bristol, taking on Devon, Oxfordshire and Dorset, and poised on level points at the top of their division.
First up were arch rivals Devon, and although Liam Sillifant lost the top seeded men’s singles game, younger brother Tyler, and Milo Semonin both won their games in style. The Cornish women’s singles were both long, tough games for Amy Polglase and young debutant Amelia Burrell, and although they fought hard both just lost out to make the overall score 2-3 to Devon.
The two men’s doubles games then also went Devon’s way, despite an enthralling titanic battle at number one as James Whetter and Guy Michell took their match to the maximum three ends, and new pairing Milo Semonin and Richard Townsend had two very close ends.
Jo Philp and Bronwen Wotton halted the Devon march to victory with a fine win at first pair, but Amy and Amelia, another new young pair, found their opponents too tough to handle, and Devon secured the overall win.
Going into the mixed, the Cornwall team were scrapping for every game and point, and Guy and Bronwen completed an amazing win at first pair, even though they had lost the second end 29 points to the maximum 30. And completing the match it was left to James and Jo to polish off the second pair, and give Cornwall a final creditable score of 5-6. 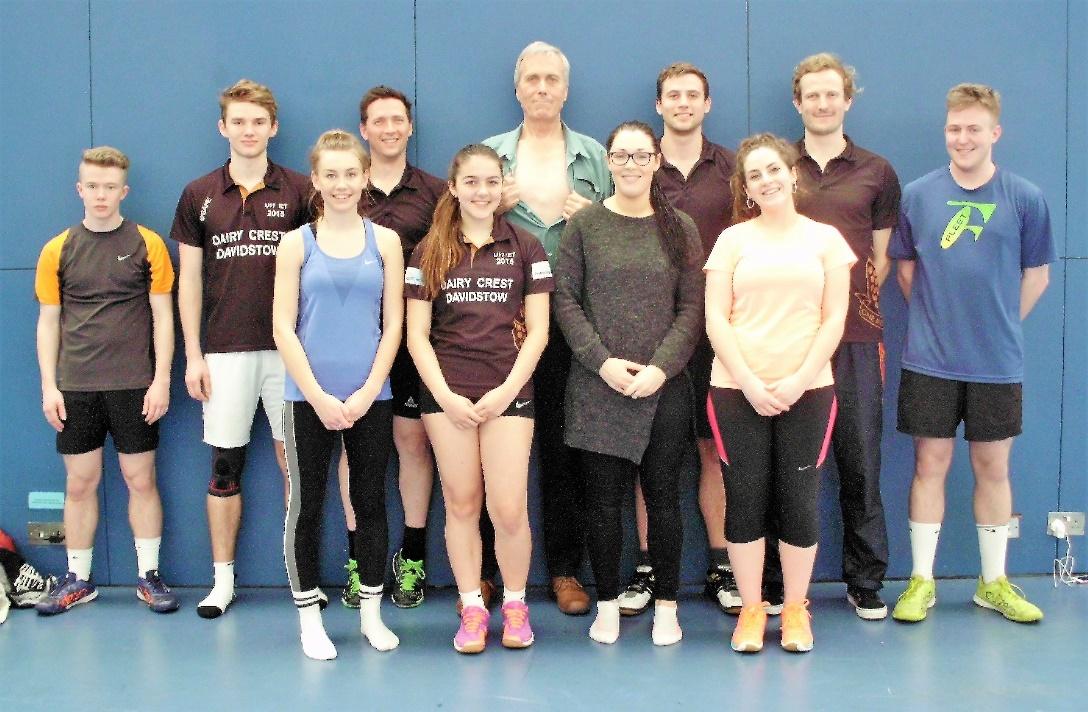 Cornwall 1st team at the end of a long, successful weekend


The same team took on Oxfordshire in the next match, this time struggling in the singles as all three men lost, despite Milo and Tyler going to three ends. Amelia too came so close to winning in the third but finally just lost 22-24, and so it was down to Amy to stop the rot, and she had an excellent win in two comfortable ends to make it 1-4 after the singles – a long way behind.
The doubles pairs set about their task determinedly, and James and Guy beat their opponents with relative ease, although Milo and Richard struggled more against their experienced pair. The Cornish girls showed how it is done as both won convincingly in two ends making the match score 5-4 going into the mixed.
Guy and Bronwen at first mixed couldn’t have got any closer, but just lost out to an older skilful pair in the final reckoning, so it was down to James and Jo to win and secure the match which they duly did to the delight of the supporting team. Score 6-5 to Cornwall. 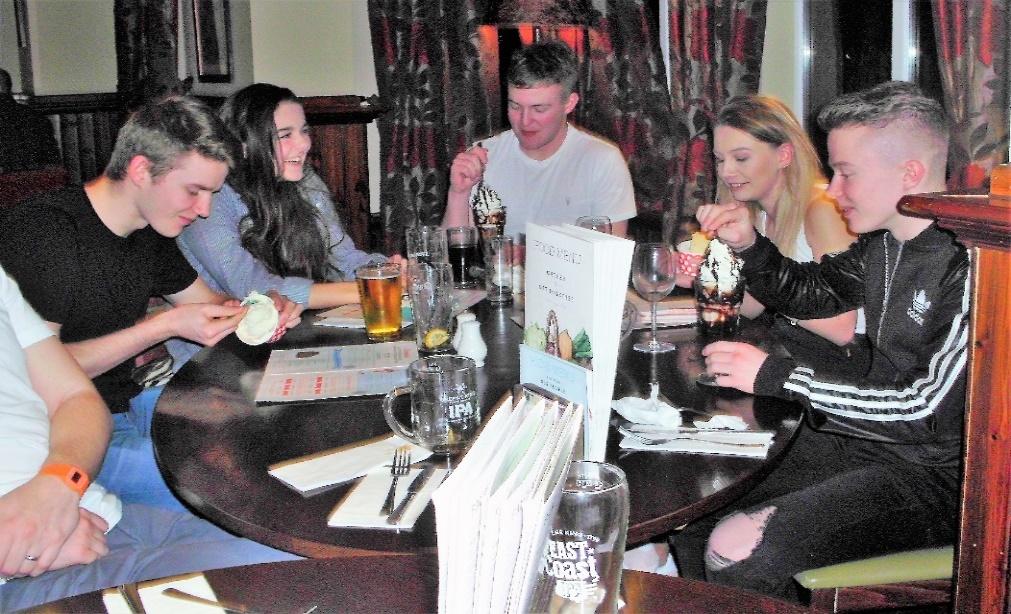 The diet of elite athletes
The next day, the teams returned to the venue, with Cornwall taking on a tired Dorset team and knowing it was still all to play for if they were to win the division.
This time the singles boys were triumphant, as all three stormed to victory, followed by Amy just losing out in three tight ends, but Amelia getting her first singles victory for the 1st team, and making the score 4-1.
The doubles continued the winning streak as both men’s pairs saw off their opponents, James and Guy very comfortably and Milo and Richard winning their first doubles as a pair. Although Jo and Bronwen narrowly lost in three, Amy and Amelia also won in three to get their first victory, giving Cornwall a commanding 7-2 lead.
The Cornish mixed pairs were too much for the disheartened Dorset team, and they both cruised to victory in two straight ends, making the match score 9-2 to Cornwall. 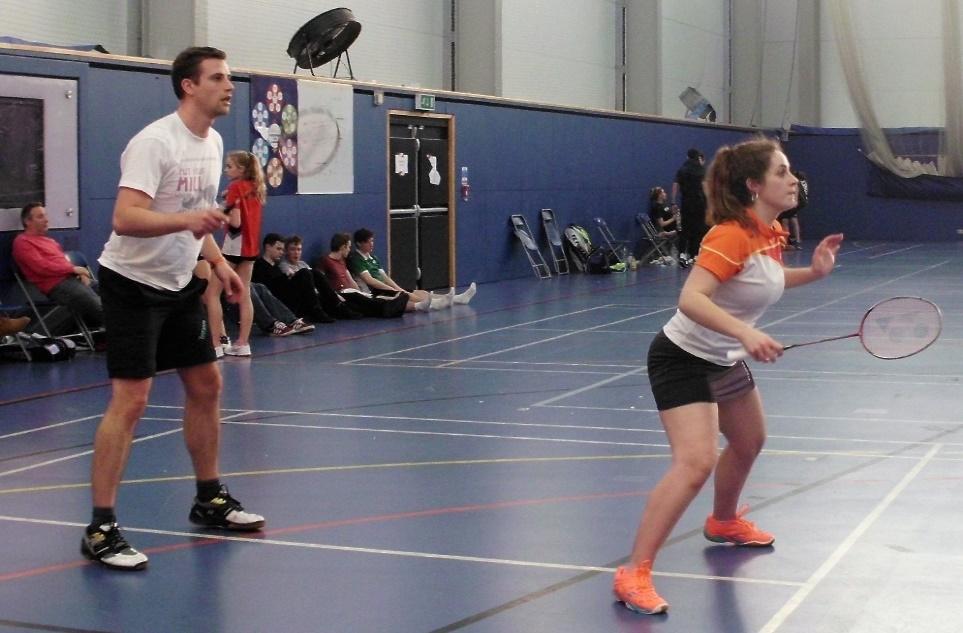 Guy and Bronwen in action
A very successful weekend for the Cornish team, as they awaited the results from all the other matches to see where they would finish. It wasn’t until the next day that the news came through that Devon had just pipped Cornwall to top slot, by one single end from the whole season!
Despite this, the Cornwall team can feel very proud of their season, with a promising mix of youth and experience to take into next year.
Cornwall 1st team – Liam Sillifant (Launceston), Milo Semonin (St Austell), Tyler Sillifant (Launceston), James Whetter (St Austell), Guy Michell (St Austell), Richard Townsend (Saltash), Amy Polglase (Camborne), Amelia Burrell (Camborne), Jo Philp (Port Isaac), Bronwen Wotton (Camborne).
Managers – Brian Hannibal and Sue Biscoe

Exeter –
Cornwall’s 2nd team were taking on Somerset and two Avon teams in their division on the same weekend, this time in Exeter.
Against Somerset, the Cornish singles players made a strong start, with Sam Spencer, Jack Dyer and young Mollie Bailey wining their games to give a 3-2 lead.
In the doubles the men’s pairings of Sam and Tony Clark, Tom Lyle and Curnow Bascombe both won in three ends. The new pairing of Melissa Lin and Amy Cox were unlucky to just lose their doubles to a very experienced Somerset pair, and in the other women’s game disaster struck when Isabel Victoria-Martinez had to pull out early with a calf injury in her doubles with Vicki Thomas.
So, Cornwall needed one more game to win the match overall going into the mixed. Sean Havis and Amy found it tough going against the first Somerset pair, so all the pressure was on Tom and Vicki to save the day, which they finally did, coming through a very tight, closely fought game to give an excellent Cornwall victory 6-5. 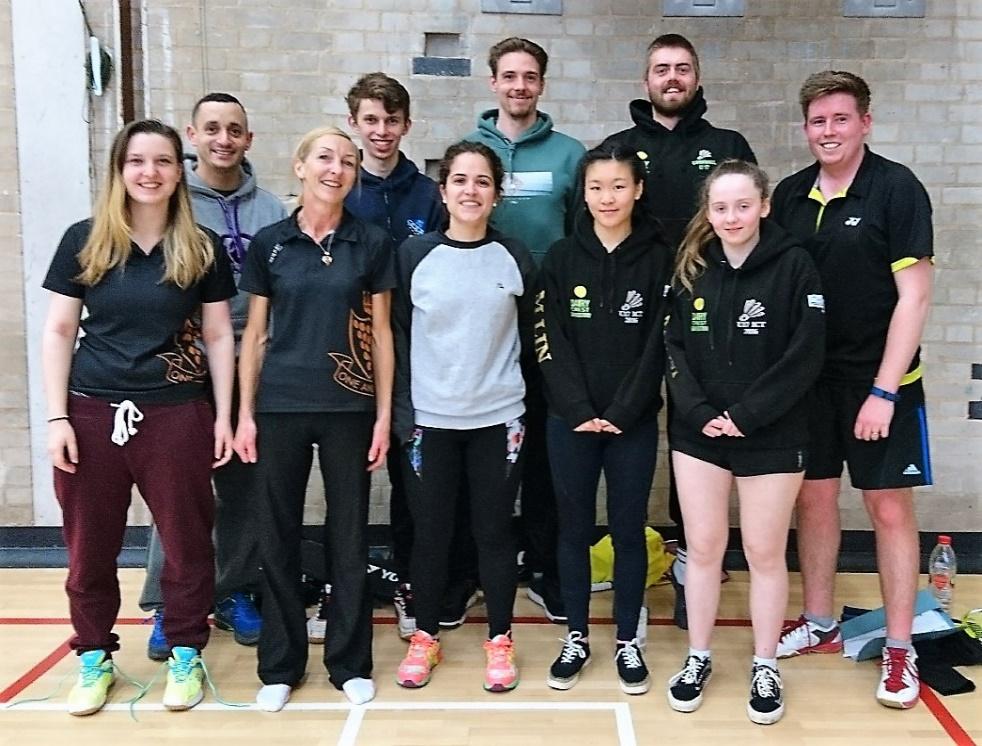 Cornwall 2nd team day 1
Next up were one of the Avon teams, and the singles players found it hard going, with only Mollie winning again, as well as Tony, making it 2-3 to Cornwall.
In the men’s doubles games Tom and Curnow once again won but this time Tony and Sam lost to a hard hitting pair, and in the women’s doubles Amy paired with Vicki successfully to win comfortably, leaving the younger pair of Mollie and Melissa to battle hard and take a fine victory in three ends.
Cornwall again needed only one game for victory and both pairs obliged – Sean and Amy in style, and Tom and Vicki just edging an exciting, see-sawing three ender to make the overall score 7-4.


On the final day, the last match was against the stronger, table-topping Avon team, with Cornwall fielding some different players to replace those unavailable from the first day. Sam Spencer was absent, and Beth Wotton and Cara Collins replaced Mollie Bailey and Melissa Lin.
In the singles only young Cara was able to win to make it 1-4 going into the doubles, where Cornwall’s sole victory was Tony and Sean in the men’s with a hard fought victory.
Honour was restored in the mixed as both pairs of Sean and Amy, and Tom and Vicki won after another trademark marathon from Tom and Vicki, making the final score 4-7 to Avon.
The team’s eventual position in the division was a very creditable third, which is an excellent result for this promising young team. 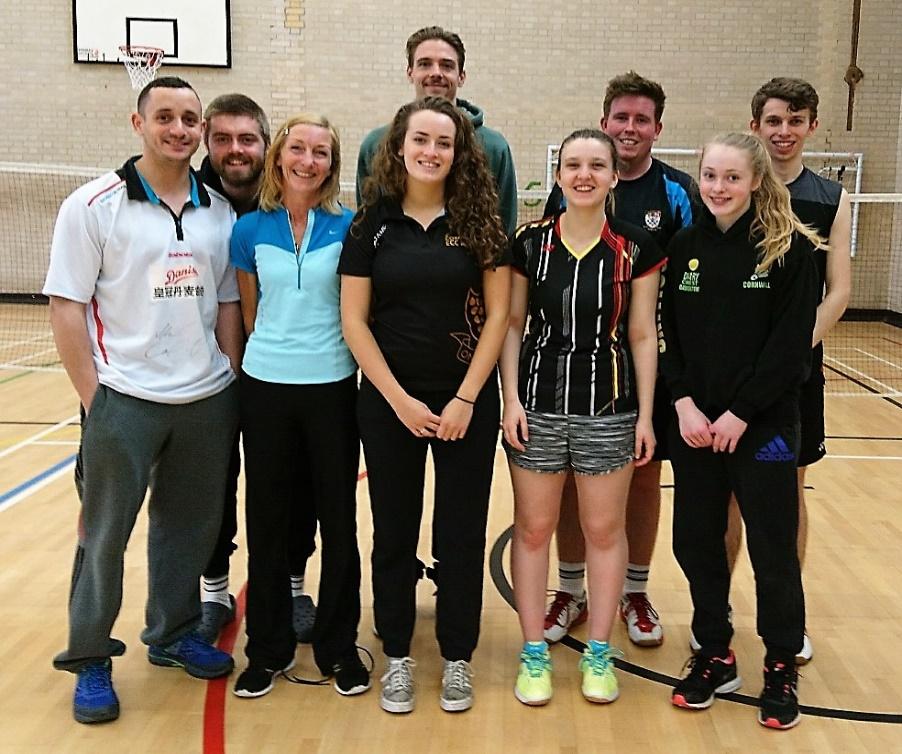 
Posted by Cornwall Badminton at 20:44