The History of the National Badminton Museum

The Museum is indebted to Herbert and Betty Scheele, Humphrey Chilton and Heather Nielsen who were the first people to realise the importance of this material to the history of the game.

In 1994 Margaret Cook was invited to become Archivist.

Volunteers realising the importance of recording and preserving badminton’s heritage formed a committee in 2003.

The National Badminton Museum was launched later in that year and was officially opened on September 9th 2003, by Neil Cameron, Chief Executive of the International Badminton Federation now the BWF.

In 2007 the Museum was granted Charity Status. To comply with the Charity Commission regulations the National Badminton Museum is now managed by Trustees. There is also a Working Party of volunteers who are responsible for the day-to-day running of the Museum.

The Museum receives no guaranteed income. Some of the display cabinets have been donated, and the purchase of others was assisted by a grant from Milton Keynes Community Foundation.

The Museum now has one of the finest and most comprehensive collections of badminton artefacts, archives and memorabilia in the world.

The Museum has an Acquisitions and Disposals committee, basically responsible for accepting and purchasing items into the Museum’s collection.

The National Badminton Museum is supported by BADMINTON England. 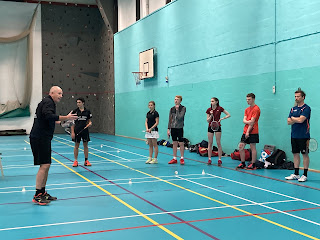 James at work
Cornwall’s senior badminton players got back into training with coach James Elkin on Sunday at last. The players made the best of some difficult court conditions in Pool and enjoyed being back together to practice their skills. 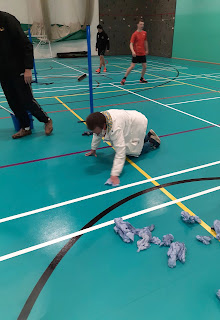 Selectors at work
The next session is planned for December 6th after the lockdown period. Watch this space for further details! 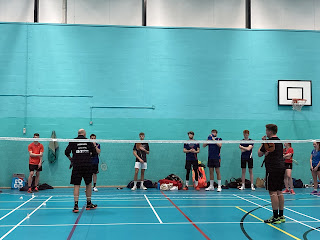 Players about to work