CORNWALL YOUTH BADMINTON WILL BE STAGING AN OPEN TRIAL FOR THE COUNTY SQUADS 2010 - 11 SEASON IN AGE GROUPS:
UNDER 13, UNDER 15 AND UNDER 17.


YOU CAN EVEN TRY OUT FOR MORE THAN ONE AGE GROUP!
(Please check age restrictions below) 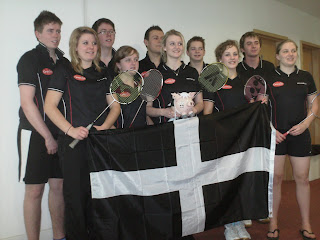 Wearing their County Shirts Sponsored by Ginster’s, Cornwall band of players took on the might of the Irish in their opening match of The Inter County Championships at Hatfield. Showing no nerves Ross Lashbrook of Launceston along with Claire Whitmore of Truro steeped out on court to face Leinsters best. It was gutsy performances by the Cornish Youngsters but the Singles were won by Leinster in two ends, the only reward for their efforts was with Tom Lyle (Cpt) Launceston and Chris Glasson Camborne taking an end off the doubles pairing.
The following group stage saw Cornwall play against Hampshire and Essex, with Claire Whitmore and Bronwin Wotton winning both their Doubles, Tom Lyle and Chris Glasson winning one Doubles and Chris and Bronwin a mixed. The other matches were close but did not go the way of Cornwall.
On the second day Cornwall’s first Match was against Suffolk, with Clare and Bronwin winning in three ends whilst Tom playing with his brother Phil took to playing Doubles losing in a close fought match in the third end. Chris and Bron once again were a strong pairing also losing 21.19 in the third end, it was so close but in the greater scheme of things far away!
The final match of the tournament brought Cornwall against old rivals Wiltshire, with Wiltshire taking both singles, then Tom and Phil were put against rivals of years gone by and after a gutsy hard fought performance they came back to win in the third end 22.20 in favour of Cornwall. After the first mixed Chris and Bronwin lost in two close ends, it was down to Tom and Lorna Garbett Callington to produce a memorable performance winning 21.14 in the third end.
All in all Cornwall finished higher than last year coming joint 17 with Somerset, coming ahead of other local rivals Avon!
It was a tournament to remember with a lot of good for the Cornwall Squad to take away, the team was Cornish Through and Trough proud to wear their shirts. It was full of hope for the seasons ahead, with a core of good County players proud to represent their County.
The team would like to thank Ginster’s, First Edition Badminton and The East Cornwall League for their support during the season.
Squad:
Chris Glasson (Camborne)
Gemma Cliffe (Liskeard)
Ross Lashbrook (Launceston)
Lorna Garbett (Callington)
Phil Lyle (Launceston)
Emily James (Falmouth)
Tom Lyle (Launceston) (Captain)
Bronwen Wotton (Hayle)
Dan Mock (Camborne)
Claire Whitmore (Truro)
Posted by Cornwall Badminton at 09:41