ALICE, GEORGIA, TOBY AND VINODH - ALL HARVEST A BRACE OF JUNIOR UNDER-13 TITLES APIECE, IN STYLISH SURROUNDINGS.
THE Dairy Crest Davidstow Cornwall Junior Under-13 Badminton Championships, 2008/2009, were held on January 18, at the superb new Penryn Sports College, with both the venue and the event itself proving to be most exciting, indeed, writes John Tresidder, with Alison Higgs.

Children from the Duchy’s Under-13 County Squad as well as beginners from clubs throughout the County joined together for a fabulous day, with four players registering a brace of wins.

The quality of badminton from the more experienced players, alongside the sheer determination and effort from those less-experienced, ensured an extremely successful event.

Firstly, the BOYS’ SINGLES had a very healthy entry of twenty. The quality of badminton within the four boxes was high, eventually resulting in Aadith Kumaravel (Truro) taking on Vinodh Arumugam (Truro) in the final.

It was anticipated to be a close contest, between these two talented youngsters - and so it proved - with Vinodh finally claiming an impressive 21-11, 21-14 victory. 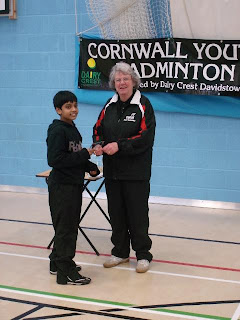 It was so encouraging to see fifteen competitors in the GIRLS’ SINGLES – possibly a record for the Under-13’s age group.

The final was contested by Alice Sporick (Truro) and Georgia Higgs (Leedstown).

Alice played a tight and strong first game, taking it 21-12. Georgia fought back, resiliently, in the second set, but Alice was seen to come through with 21-17 game, to claim the prestigious blue-ribband title. 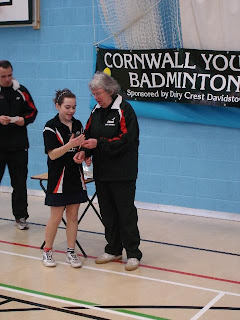 Ben and Aadith kept control during a closely-fought first game and
won it 21-17.

However, Toby and Vinodh came back extremely well to take the next two ends, 21-13, 21-13, to secure their eventual victory. 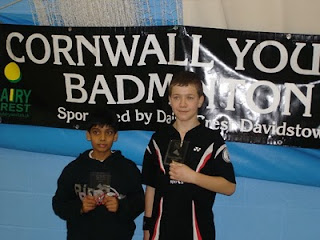 Meanwhile, in the GIRLS’ DOUBLES, with just one box of seven entries, it was the pair with the most points who would succeed.

There were some excellent games played with a lot of fun and laughter, alongside a steely determination to win.

Particular mention should go to Ruth Barnicoat (Falmouth) and Emily Toy (Falmouth) who were runners-up in the box and who competed well - throughout the day.

Eventually, the title went to Alice Sporick and Georgia Higgs, whose consistency made them the stronger Outfit. 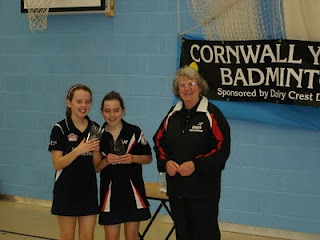 By the time of the final event of the day, the MIXED DOUBLES, the quality of badminton kept getting better and better.

It was a pleasure for the organisers and the supporters to watch these talented Under 13’s and credit goes to all four players who were in the final – the combinations of Georgia Higgs/Toby Bamforth and Alice Sporick/Ben Johnson.

It proved to be an extremely closely-fought affair, with each point being fiercely contested, with neither pair ever pulling very far ahead.

Georgia and Toby, in the final analysis, secured a close first end, 22-20 and proceeded to go on to claim an even closer second end, 27-25, to register the title, with both players recording a brace of victories. 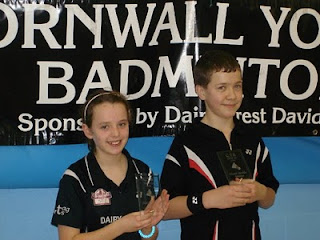 Congratulations to everyone who took part in this, the final event of the Junior Championships, for this season.

Special thanks are afforded to Jenny Marchant, the County Badminton Chairman, who was the Referee for the Day and to Ros Bastian, Penryn College’s Director of Sport for the warm welcome, over two enthralling weekends.

Finally, thanks also to Paul Johnson and Alison Higgs, the County Under-13 Co-Managers, Chris and Kate Bamforth, Kath Bick and all the parents who stayed to support - helping to set up and pack away the equipment.

The over 60's run of wins came to an end away to Gloucester on Sunday 24th. The match commenced reasonably well with Brian and Phil winning one of their mens likewise did Tony and Mike. However the team were distraught when captain Brian pulled a muscle in the leg during his second mens game and was forced to withdraw, hence taking no further part in the match.

Vera and Chris played really well to win both of their ladies games, but having to concede a mens and a mixed game meant that the overall scoreline was a 5-7 defeat which was really disappointing as a win was probably on the cards.

Their next match is scheduled for Sunday 31st at home to Wiltshire.
Posted by Cornwall Badminton at 09:59

The event will take place on Sunday 14th March, and is aimed at social players who play for fun, and low to medium level league players, giving a chance to play competitively against different people.

The entry form is available from the download section to the right of this page, and entrants have the choice of entering mens or ladies and mixed doubles, and to either play with social or league players.

The closing date for entries is 26th February.
Posted by Cornwall Badminton at 20:06

OVER 60's HONOURED WITH PRESENCE OF COUNTY PRESIDENT

The over 60's were delighted to have the support of County President Mr Mike Avery at their match against Somerset at St. Austell on Sunday. The team continued their early season success with a convincing 11-1 win to maintain 3rd position in the league.

Next Sunday will be a crunch match away to top of the table Gloucester. Captain Brian Hannibal, who leads by example, and plays an inspirational part in the team’s success, says he is confident of a positive result.

Both of the veterans teams were disappointed last weekend that the Yehlex inter-county tournaments being held at Bournemouth and Swindon were postponed due to the inclement weather, but fortunately these have now been rescheduled, to be played during March.
Posted by Cornwall Badminton at 20:46

Regretfully, due to current conditions and weather forecast, the tournament this weekend Sat 9th/Sun 10th will now be postponed.

The tournament will still run, and a new date will follow in due course.
Posted by Cornwall Badminton at 10:40