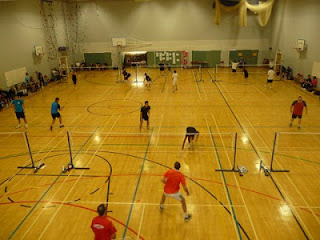 
Over 70 badminton players from all over Cornwall and Plymouth, came to Truro Leisure Centre at the weekend to take part in Cornwall Badminton Association’s Bonanza.

This year’s tournament at the new venue was a great success, with the Griffiths family from Camborne sweeping the board in the social sections. Husband and wife, Mark and Della, won the mixed doubles, then father and son, Mathew joined forces to win the mens, and the final event of the day, saw Mark finally wear down Mathew despite a touch of cramp, to triumph in the singles.

It was a similar scene in the league section, with St Ives’ Tony Wong winning the singles and the mens doubles with partner Trevelyan Searle, but just losing out in the mixed with Catherine Harrison to the Plymouth pair of Ryan Lambourne and Waine Parker. 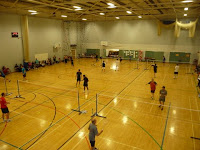 Posted by Cornwall Badminton at 18:17

Cornwall II played Somerset III on 14th October 2012 at Crewkerne.  It was a close run thing against the Somerset 3rd team and although the tie was lost 7-8, nearly 2/3 of the rubbers went to 3 ends, so the result could have gone either way. We had several new players in the team and there was a very good team spirit. Well done to everyone. 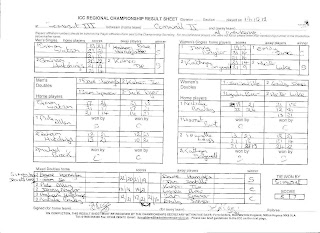 Posted by Cornwall Badminton at 14:29

Ken Archer has sadly passed away aged 88. Gentleman Ken held the County Chairmans post for a number of years and also kindly donated a cup to the County which is awarded to the mixed doubles winners at the annual veterans tournament.


His funeral is scheduled for 1230 on Monday 22 October at Bodmin Crematorium.
Posted by Cornwall Badminton at 17:50

CLEAN SWEEP FOR JAMES AND JO 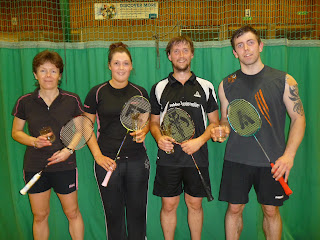 This weekend saw a feast of high quality badminton at Polkyth Leisure Centre, as Cornwall’s top players battled it out for this year’s County Championships. The large entry, with an excellent turn out of Cornwall Youth Badminton’s under 17 year old players, was up on last year, and shows the healthy current and future state of Cornish Badminton as the majority of the competitors were under 21.

Stars of the show were James Whetter and Jo Philp, who each won 3 titles over the weekend, in the mens and ladies singles and with their partners in the doubles. James won back the singles title which he last won 4 years ago, defeating the defending champion Shane Maton in two ends of fluent, attacking badminton. Number 1 seed Jo, took three closely fought ends to beat Rose Willis, who was bidding to take the singles crown for the first time, after both players had shown their class in cruising to the final. 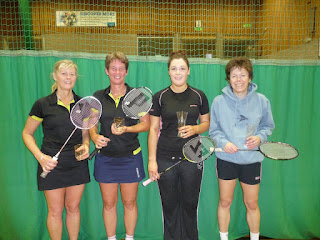 The ladies doubles saw some tight games, with the promising young players Amy Polglase and Kellan Moore beating the defending champions Emily James and Vicki Thomas before coming up against the experienced Jan Santillo and Lynda Beer, who defeated them in two close games to reach the final. At the other half of the draw, the second seeds, Jo Philp and Rose Willis came through their semi taking on the Wotton sisters, Bronwen and Bethany, with some great net play on show. Rose and Jo finally overcame the tactical play of Jan and Lynda with their power and accuracy to win the final.

Sunday saw the mens and mixed doubles, and the large crowd were treated to some more exciting badminton – tournament secretary and county selector Lorna Riggs said “this year’s championships has been a brilliant standard with a bigger entry than last year, it’s great to see so many promising young players improving all the time”. 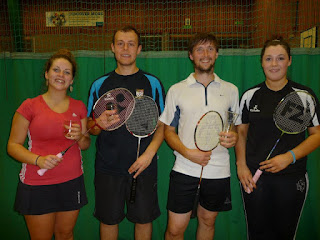 The mixed doubles had 24 pairs battling it out for the coveted trophy. All the seeded pairs made it through to the semi finals, except Bob Bell and Lynda Beer who were beaten by Kelvin Edwards and Emily James in a skilful two-ender – they in turn were then beaten by Ross Lashbrook and Bronwen Wotton who met James and Jo in the final. Despite some amazing defensive play by Ross and Bron, James and Jo emerged victorious in two tight ends with more consistent court coverage and stunning net play. 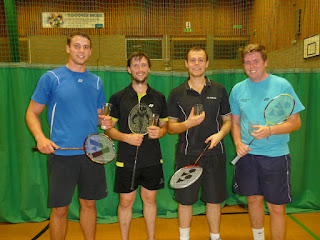 The seeded mens pairs had to fight hard in 3 out of the 4 quarter final games which all went to the maximum 3 ends, except Shane Maton and Dave Harrington’s game which was a more comfortable 2 ender. Kelvin and Sam Spencer just edged out the veteran Bob Bell and Nick Phelps to set up a semi against Ross and Tom Lyle, who had only just beaten the Jasper brothers, Christian and Kris. In the end number 2 seeds Ross and Tom ran out comfortable winners to take on champions James and Guy once more in the final. This final game had the watchers entertained and enthralled, with spectacular dives, smashes and impossible retrieves on display - everything a top mens doubles should be. With Ross and Tom winning the first end easily, it seemed like an upset was on the cards, until James and Guy showed their experience to eventually just edge the match in a thrilling finale.