The badminton training session by former Korean National champion Lee Jae Bok accompanied by former Korean ladies singles and doubles champion Lee Young Sook took place last Saturday at St Austell Rugby Club. The event was well attended and all participants were treated to a masterclass that covered many areas of badminton including mental attitude, footwork,shot execution, doubles tactics and deception. The day was a great success and it was agreed that it had been an enjoyable and extremely worthwhile experience. The training session was organised by Pete Bazin of Truro Badminton Club, who is hoping to organise further training with Lee Jae Bok and Lee Young Sook in the future. 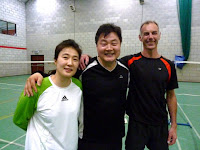 Welcome to the 2009/10 Cornwall Badminton Season. We hope you’ve had a good break and are raring to go! Please note -

We hope and expect that ALL of last season’s 1st & 2nd team players will attend County Club and Coaching and enter the Cornwall Open and Restricted, and will attend the relevant Trials to be considered for selection. We will have 5 teams this year – 1st and 2nd, 17-21's and two Vets teams – 40s and 60s.

ALL expected to attend

Format will be: 7 to 8pm – games, 8 to 9pm – coaching, and 9 to 10pm – games.
Selectors will organise games/pairings and there will be a chance for 1st/2nd team practice.
County Club Coaching will be led by Kelvin Edwards, and will include serving and return of serve, doubles and mixed tactics and positioning.
Payment will be £8 per session, for all players this year, to be paid at the beginning of each evening – no pay no play!

More information about fixtures etc will be available at the first County Club. Please contact one of the Selectors if you need any information in advance.
Team selections will be made after the Restricted Championship.

BADMINTON: 27TH DUCHY “OPEN” IS EXPECTED TO ATTRACT AROUND 100 COMPETITORS

ENTRIES have started to roll in, well and truly for the Duchy of Cornwall 27th “Open” Badminton Championships, scheduled for four weeks time, from this weekend, writes John Tresidder.

The prestigious Event, in its tenth year as a BADMINTON England “Satellite” Ranking Tournament, and with the prize-fund set at: £1,260, is scheduled for Carn Brea Leisure Centre, Pool, Near Redruth - on the weekend of - Saturday and Sunday, September 19/20.

GRAPHIC SOLUTIONS - www.graphicsols.com - the Computer Company, from Farnborough, Hampshire, together with Exeter’s TAG SPORTS - www.tagsports.co.uk, in conjunction with YONEX UK LTD, have once more joined forces as the Tournament’s joint main sponsors.

Meanwhile, Nick Lake’s Countryman Inns Free Inns Group, with its HQ’s at Piece, Carnkie, Near Redruth, together Dales Renault, based at Scorrier and Summercourt, are amongst the other generous backers, of the Championships, which are known as one of the most popular on the English Badminton Circuit.

Men’s and Ladies’ Singles, followed by Mixed Doubles, extending to the Semi-finals stage on the Saturday evening.

“Bleacher”, tiered seating will be set out for players, supporters and spectators, as in past years, with the entry to the hall being free.

The closing date for entries is: Saturday September 5 and one can download an entry from the BADMINTON England Website:

CYB – a large squad is expected to turn out:

Jon Wotton, the Coach and CYB co-ordinator, reports - it is anticpated that there is to be another great entry from Kernow’s Youth, once more – with

Meanwhile, Cornwall’s County number one players – James Whetter (St. Austell Bay), whose Company Rubber Flooring Online, are one of the advertisers, together with Truro College student, Johanna Philp (Port Isaac-based), aged 16, are planning to enter three disciplines of play, apiece, over the weekend. 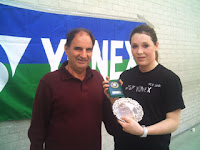 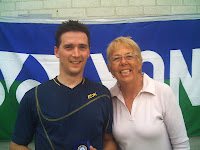 PHOTOS: PAUL COLLINS, CAMBORNE..
* David on the referee’s console: David Burgess, an experienced International Referee and Devon County’s Chairman, is the official in charge of the play in the hall over the weekend, once more.

* Linda, the Chief, looking forward to another exhilarating weekend:

Linda Collins, the diligent and enthusiastic Chairman and Tournament Secretary of Event, who has been in post since 1988, comments: “We look forward to One & All calling into the Carn Brea Hall, over the weekend, where one will be made most welcome, as usual, to witness, some very exciting badminton, indeed, undoubtedly.”

Finally, the comprehensive review/results, will be published in the Cornish & Devon Press, as well as being posted on the Cornwall Badminton Website: www.cornwallbadminton.co.uk - in the week following the Tournament.

Posted by Cornwall Badminton at 09:36