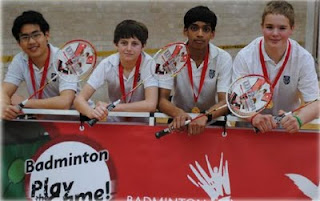 The Cornish School, who travelled up on the Friday, with an abundance of rackets, kit bags, snacks, fruit juices and the like, had no need to pack their bows and arrows, on this occasion, for their famous visit to Robin Hood Territory, world- renowned,

As anticipated, the National play, overall, was seen to be of an exceptionally high standard, with some of the Country’s most talented badminton youngsters, including Junior Internationals, competing in the famous Sherwood Forest Hall.

On Saturday, the first day, Truro School’s Key Stage 3 KS3. Years, 7, 8 and 9 (Under-14) Team, who are relatively inexperienced at junior county play, played valiantly, but finished ninth out of nine regional schools. However ninth best School in the Country, remains a superb result.

The Duchy’s well known School, competing in a group of three regions, won around 50% of the singles games contested, going down in two matches by a single point and five rubbers, by the same margin.

Moving on to the play, Truro’s Isaac Barrow and Kieran Westlake Outfit, won all their respective doubles rubbers; thus, having remained undefeated at county, regional and national level, all season – quite some achievement Boys.

Meanwhile, Vinodh Arumugam, took the scalp of Michael Taylor, a higher-ranked “Silver” player, from Lincolnshire, before Lancashire’s Mattew Kitteringham and proved to be an inspirational skipper all day, for Truro School.

Mr. Eric Brown, BADMINTON England’s Chair of the Youth and Sport Board,
earlier in the day, welcomed all the competitors in the age categories to the Finals, before acting as the Organiser and the Referee.

Mr. Brown reported that the standard of play was increasing from Year-to-Year, with some 1,600 English Schools and 23,000 players starting out for this year’s 2010/2011 Tournament.

Team England International, Jenny Wallwork, part of the Nathan Robertson, Mixed Doubles combination, who are hoping to be selected for the London 2012 Olympic Games, was present to give support to the proceedings.

David Hunt, Truro School’s Team Manager and Head of 2nd Year, was full of praise for his young Team and reported:

“We gave it our best shot, most certainly and enjoyed the Day, and the ambience at the Sherwoof Forest Parcs, immensely.

“I visited Center Parcs, Nottingham, in the Spring of 2009, with a Truro Girls’ Team, who finished 6/9 and Center Parcs, this time around, once more, provided excellent hospitality and facilities, including the sports hall and the catering hall.

“Our gratitude is extended to the Company’s management and staff, including Mr. Colin Whaley, Sales and Marketing Director, along with Mr. Brown and BADMINTON England, as well.

“Congratulations to Stantonbury Campus School, Bucks, who became National champions in our KS3 Boys’ Under-14 .Tournament, including to Members, Jed and Harry Arksey, the England International Brothers, who have associations with Alan Williams’ popular Kerrier Open Tournaments, contested at my School

“A special word for the Penryn College Badminton Club, our fellow competitors, and friends in Kernow, who have also experienced a memorable season, under the direction of chief coach, Jon Wotton.

“Penryn College became the Regional runner’s up in the KS3 Girls’ Doubles Tournament, behind Bournemouth High School for Girls, the eventual National Champions, thus becoming the Joint 10th Best team in England – some achievement Jon and Ros. Bastian, Head of Sport and PE.”

“All day, my charges gave 100%, in an inspirational performance, in the National finals and I am so very proud of them all.

“We couldn’t overcome the final hurdle, but to finish 9th Best School, in England, is a fantastic achievement. This has been an invaluable experience for the Boys and it will inspire them, undoubtedly, for their years ahead in Badminton.

The young stars, who are both good friends, are showing remarkable prowess and passion on their beloved badminton court.

Both youngsters, so personable and unassuming, have been playing badminton for 18 months only and, already, they have gained National recognition, via BADMINTON England rankings, in the Under-13 Girls’ Singles discipline.

The Girls have been members of the successful Cornwall Youth Badminton (CYB) Under-13 team, sponsored by Dairy Crest Davidstow (“Cathedral City” cheese), which, has lifted the South West Counties Junior Badminton League, for the first time in Kernow’s history. Indeed, Kellen has been the Team’s joint captain, along with Sam Laity and Alex Julian.

Alan and Clif to the fore, with coaching, as Jo. helps out with games on court:

Alan Williams and Clif Morcom, from the popular First Edition Junior Badminton Club, based in Pool, Redruth and sponsored by The Redruth Charity Trust, with Chris Hailey, as its chairman, have both been instrumental in the Girls' phenomenal development and success.

In addition, the Moore and Polglase families are indebted to Jo. Philp, the Cornwall number one badminton lady, in respect of her advice and the games, played at Carn Brea Leisure Centre, over the past year.

Furthermore, Badminton, on the Camborne Science College campus, under the direction of Kath Wotton, nee Giles, together with the Sports Department staff, is seen to be thriving, with membership in excess of forty, with Kellen and Amy being among the representative players. for the inter-college matches.

Kellen competes at the BADMINTON England “Nationals”, in Bristol:

Saturday March 19, saw Kellen taking up an invitation to compete in the prestigious “Nationals”, for the Girls’ Singles under-13 age group. held at the University of The West of England (UWE), Bristol.

Whilst flying the flag, proudly, for the Duchy, she gave a very good account of herself, in defeating an England “Gold” Girl, Katriona Clegg, from Yorkshire, 23/25, 21/12, 21/15, before putting up a gritty performance against an England International, going down, valiantly, 21/12, 21/15.

MIss Moore, has also had representative outings for the CYB Under-15 squad and, this season she has also lifted the Cornwall singles and doubles events, at both under-13 and under-15 level, the level doubles whilst teaming up with Amy Polglase, on each occasion.

Next season, Kellen steps up the “Ladder” to the under 15’s - familiar territory, to the young lady - and the status-quo - with even more success, with the plaudits rolling in - very much on the cards. Well done Kellen, on a most memorable season.

Meanwhile, Miss Polgase, who spent five years training with the Swallows of Helton Gym Club, Nationally renowned – which shows through in her sublime natural movement, poise and balance on the court – with the exodus of the older Girls to the Under-15 group, will start off in September, 2011, as the 7th best under-13 Girl, in England – some achievement, keep up the good work and training, Amy.

On the Weekend of April 9/10 and May 7/8, the young ladies were on their travels, once more, accompanied by proud Mums, Lesley Moore and Carole, Polglase, when they competed in the South West of England “Open” and “Closed” Badminton Under-13 and Under-15 singles and doubles, at Torbay, South Devon, with yet more silverware harvested for the home journey.

Senior County No. 1 challenge, within three years, seems a certainty:

Finally, the writer, John Tresidder, is certain, that by the 2014/2015 campaign, both Kellen and Amy will be challenging to reach the Cornwall Ladies’ singles number one berth, currently held by 18-year-old, Jo Philp (Port Isaac) and, allied to their development, they will also be bidding for places in the Cornwall First Team’s squad, as well.

* In respect of the 2011/2012 season, Kellen and Amy are looking for sponsorship and any Cornish company interested, is asked to contact in the first instance: