Cornwall Badminton Teams new Sponsor
The three senior county teams have a new sponsor this season – Cornwall Fascias, who have supplied new shirts and tops for the players for their matches in the Senior County Championships.
Cornwall Fascias were started in 1995 and this family firm, based in Bodmin, are the leading uVPC multi stockists working in the building plastics supply sector all over Cornwall. 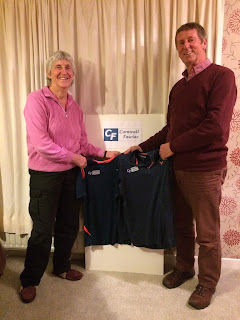 Pat Edwards of Cornwall Fascias hands over the new kit to CCBA Chairman Bob Bell
Posted by Sue Biscoe at 18:51

Entry fee £12.00 per person and entry forms are available to download here.

This tournament is a Handicapped Mixed Doubles Tournament open to ALL players – League and Social. (The Social element of the tournament will not be handicapped as the Committee will not have the relevant info to handicap couples fairly). The format of the Tournament will be decided by the number of entries, but it will be a round robin.

Social Category : Eligible players must have only played recreationally within the last 10 years. Players who have played any league/county or similar standard matches within this time will be ineligible for this category.

League Category: Eligible players who have played League or County, and who do not fall within the Social category.
Posted by jaydubyuh at 08:53

Cornwall Vets rise to the Challenge

The two Cornwall badminton veteran teams have just returned from a successful weekend in Eastleigh, taking part in Badminton England’s Masters County Challenge, where the top players from counties across the country compete against each other and enjoy a sociable two days.


The over 50s team had an impressive weekend, never losing a match and combining well to beat Buckinghamshire 3-1 and Surrey 4-0 and drawing 2-2 to Hertfordshire and Oxfordshire on the first day.


Day two saw the teams all play each other again, after an enjoyable dinner dance the night before, and first up for Cornwall 50s were arch rivals Herts who were dispatched 3-1, followed by two 4-0 whitewashings of Surrey and Bucks. Last up for the Cornish players were Oxfordshire in the final match and after losing the men’s doubles and the first mixed, a 2-2 draw was achieved after fine wins for the women’s doubles and the second mixed pair.

Although the weekends results are yet to be confirmed by Badminton England, the Cornwall over 50s look to have won the division and will be promoted following these excellent results.

New kit for the weekend once again kindly supplied by Richard Jones.

The Cornwall over 65s also had a good weekend, on the first day winning against the Isle of Wight 3-0, Somerset 2-1 and a combined Buckinghamshire/Surrey team 3-0, before losing 3-0 to a strong Sussex team.

On the final day, the team again beat the Isle of Wight and Bucks/Surrey 2-1, but lost to Somerset and Sussex 2-1.