27TH DUCHY “OPEN”: ELANA AND DARYL HARVEST THE BLUE RIBBAND SINGLES TITLES AND GO ON TO RECORD A BRACE OF WINS, APIECE

YET another memorable and successful weekend was experienced at the Duchy of Cornwall 27th “Open” Badminton Championships, writes John Tresidder.

There was a bumper entry of 124, for the Tournament, which was staged at its usual base, Carn Brea Leisure Centre, Pool, Near Redruth, over the weekend of September 19/20.

A Middlesex lady carried home inaugural singles and doubles titles, whilst her compatriot, replied, likewise, in his second Duchy/Satellite title.

The Event, was celebrating its tenth year as a BADMINTON England “Satellite” Ranking Tournament, with the prize-fund set at £1,260.

Meanwhile, Nick Lake’s Countryman Free Inns Group, with its HQ’s at Piece, Carnkie, Near Redruth, together Dales Renault, based at Scorrier and Summercourt, were amongst the other generous backers, of the Championships, which are known as one of the most popular on the English Badminton Circuit.

Moving on to the play:

However, there was some consolation for Miss Marr, who accounted for Exton’s Betty Blair, seeded one (striving for a ninth crown) - in the semi-finals.

Meanwhile, Daryl Jacobs was seen to retain his tile, when he out-pointed Gloucestershire’s Chris Hotchen, 21/18, /21/14.

Elana and Daryl then proceeded to complete a brace of wins, apiece, on day two - lifting the Ladies' and Men’s Doubles, in partnership with Kate Lester Herts) and Steve Jacobs (brother – keeping it in the family), respectively.

Cornwall, the host, experienced a most rewarding weekend:

Day One witnessed Kelvin Edwards, Cornwall's Player/Coach, reaching the main draw's third round, along with the "Best Cornish Player", Ross Lashbrook (Launceston). Claire Whitmore, a Truro School Upper Sixth Student, won a battle-royale, to get through to the second round in the Ladies’ event.

On the Sunday, Claire partnered Emily James (Singles Plate finalist on the Saturday) to the doubles semi-finals, with the Rachel Irish and Johanna Philp Team securing a semi berth as well, before going down in three games to the eventual champions.

In the Special Awards, Emily James, Falmouth-based, who becomes a Cambridge University Fresher, in October, was the popular recipient of the Sporting Spirit Trophy, with Ross Lashbrook (Launceston), installed as The Best Cornish Player.

* David on the referee’s console:

David Burgess, an experienced International Referee, from Devon, was the official in charge of the play in the hall over the weekend.

Linda Collins conveys her thanks to the following for the enjoyable weekend:

Finally, the comprehensive review/results, will be published in the Cornish & Devon Press, as well as being posted on the Cornwall Badminton Website: www.cornwallbadminton.co.uk 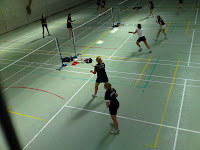