It must have been a very long subdued journey back for the away side on Sunday as Cornwall’s badminton stars totally dominated, out classed and thrashed Dorset 13-2. You would have to go back a long way to find records of a Cornish win of that degree. Even more astounding, the team Dorset brought down, with one exception, was the same as Cornwall’s 8-7 victory in Bournemouth.

Sue Biscoe and Brian Hannibal, selectors for the Duchy, said at the press conference after the fixture.
“We were a league above them” commented Sue.
“That’s where we are headed if we can maintain this form in our last two matches” remarked Brian Hannibal.

Indeed the Cornish are hitting good form at the right time, and an away win against Avon in a couple of week’s time would give them the opportunity to beat West Glamorgan in the final fixture and gain promotion.

The Cornish singles players set the bench mark high right from the start with Kelvin Edwards, James Whetter, Jo Philip and Bron Wotton all winning. Credit to James, who held on against a very fast and deceptive left hander and in the final end showed good determination winning through 21-11.

Although injury troubles thwarted the Duchy side in the Ladies doubles, it evidenced the strength Cornwall badminton has developed in depth. Vicky Thomas (Mounts bay) and Lorna Riggs (Fraddon) were called into the team at late notice. Vicky partnering regular Jo brought off two fantastic results winning both their ties. Lorna partnering Bron won one and lost one.
“It was like they had been playing together for years, they were so unlucky not to win both” commented Brian.

“It was marvellous to watch them floating round the court replied Sue.

Like an army of heavy artillery the Cornwall men’s doubles pairings of Tom Lyle and Ross Lashbrook, James and Guy Michell nothing short of destroyed the Dorset pairings on all counts. Kelvin, who coaches the squad remarked “If this was boxing the referee would have stopped it in under 30 seconds” he continued “Any club player wishing to improve their game need to come to these matches and watch these guys play, it’s truly brilliant. As a pair they hunt down the shuttle and like a sniper finding its target, they find spaces on the court exploit it and destroy the weak return. The Dorset men could do nothing but run for cover.”

The mixed doubles inevitably went to the Cornish, only Bron and Kelvin lost out narrowly in the third end of their tie. Final match score 13 – 2 and a message to the rest of league, be ready when you travel to Cornwall. One and all. 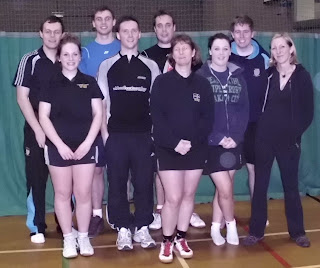 Cornwall U17 Girls have been hard at work travelling with many members of the County Squad across the length and breadth of the South West over the last 5 months, collecting a batch of medals on the Badminton England Tournament circuit. 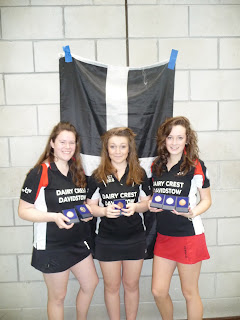 So watch it boys ,the girls are aiming to get a GOLD before the end of the season !!
Posted by Cornwall Badminton at 16:31

Following their tremendous 11-1 win over the Isle Of Wight in the last match, captain Brian Hannibal always knew that Cornwall’s encounter with top of the table Avon 1 would be much more competitive.

With Mike Nancekivell not available, Brian called upon super-sub Bill Edgar, who can always be relied upon when needed.

Both of the first two mens matches involving the regular pairing of Brian with Phil Oland and Tony Roberts teaming up with Bill went to three ends. Although the games could have easily gone either way, both were lost. Fortunately Brian and Phil won their remaining game against the Avon second pair, while Bill and Tony played exceptionally well to defeat the Avon first pair.

The ladies matches were also tough games. Despite some precision serving from Pat Edwards playing with Celia Hillman the only win came from Vera Nancekivell partnering Chris Marr.

It was hoped that the mixed games would produce some positive results, but the Avon pairings were very good and our only success came from Celia partnered by Bill.

This was the match which Cornwall needed to win in order to consolidate top spot in the league, however with two away matches remaining, one at Avon 2nd and the other at Wiltshire, it is hoped that second place will be maintained.

The team were honoured and pleased to have the County President, Mr Michael Avery and his wife Pauline in attendance and their support was appreciated.
Posted by Cornwall Badminton at 10:22

Congratulations to the Cornwall U13 Badminton team, comprising of Sam Laity and Kellen Moore ( captains), Alex Julian, Amy Polgase, Isaac Barrow, Billie Wood, Nick Peters, Rosa Higgs, Tyler Sillifant, Cara Thompson, Milo Semonin and Laura Galley, who travelled to Exeter to play their first inter county match fixture Vs Devon. This team of enthusiastic, committed young players did themselves extremely proud as they claimed the win; 26 games to 10. This victory improved on last year's, as 6 more games were won across the board. Competition was stiff, with no less than 10 games being taken to 3 ends, but the 'depth' in our ability, together with our tenacity and sportsmanship won us the day. Results: Boys' singles - won 5:1; Girls' singles won 5:1; Boys' doubles - won 6:3; Girls doubles - won 5: 4 and Mixed doubles - won 5:1. Well done to Sam Laity, who has now earned his 'U13 cap. Rather than try and select a 'player of the match' amongst what was an utterly committed team, special mention must be made of the 2nd seed Boys doubles pair: Isaac and Nick, who fought to gain victory over the Devon Number one seeded pair: 21 -13; 24- 26; 21-14 and to the Girls doubles pair: Kellen and Amy, who not only won their respective singles games, but who made a clean sweep in their doubles and mixed doubles games too. Thanks to the parents for their support and encouragement and to the coaches, who are clearly making a difference! 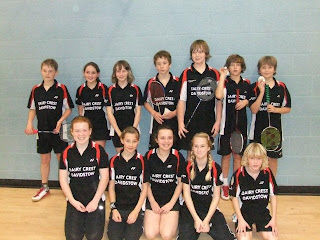 The Cornwall u13 team can stand tall and proud amongst the badminton crowd, following today’s convincing win of 24 games to 12, against the usually formidable Dorset team. The match, played on ‘home turf’ at Tregorrick Park, St Austell, saw some tightly contested games, but the depth of strength in our team of cool, determined contestants, proved too overwhelming for the opposition; with only 6 games reaching 3 ends.

Well done to Kellen Moore and Amy Polglase who lived up to expectation by making a clean sweep; taking their singles games and all 3 doubles. Special mention must be also be made of: the number 3 boys doubles pair, Tyler Sillifant and Milo Semonin, who fought tenaciously to gain 16 points in their final end against the Dorset number one pair - the highest points total achieved amongst our boys against this talented pairing of Tommy Bridger and David Higbee, and of our girls 3rd pair, Cara Thompson and Laura Galley, who, despite being 14 -21 down after the first end against the Dorset number 2 pairing, caused an exciting ‘upset‘ as they fought tirelessly to take the next two ends, 25-23 and 21-18! Cornwall took 5 games to 1 in the Mixed, proving the focus on ‘doubles’ work done by our very capable local coaches, Jon Wotton and Cathryn Bick, is certainly having a positive effect! 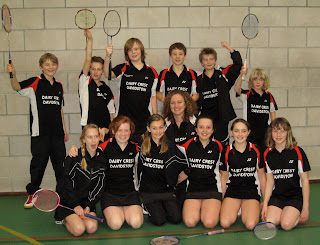 Having lost their last two matches away to Avon and Dorset, Cornwall travelled with any early start to Gloucestershire. After the boys and girls singles games the match was equal at 6/6 followed by the doubles games it was again equal at 15/15. All now was resting on the remaining 6 mixed games. At 18/17 in favour of Cornwall the last pairing of M Bick and K Moore needed to seal the win. With the two teams lining the side of the court for support Glous took the first end 23/21, Cornwall the second 21/16. All again now rested on this last end whether the final result would be a draw or a win. The young pair held their nerve and won in a thrilling but nail biting third end of 24/22 sealing the victory in this fantastic close fought match over Glous.
The final result was 19/17 to Cornwall.


On 16th Jan, the day after their County Championships, Cornwall U15’ succeeded again with a win over Wiltshire in a home match at Penryn College. With a few changes in team selection since the last match they won with a resounding result of 32/4.

As in all our matches, players wore their Cornish Shirts with pride and our thanks go to our main sponsor Dairy Crest of Davidstow.

Cornwall u15’s now look forward to their next two matches versus Devon (home) and Somerset (away).

Cornwall Badminton 40's triumph on the Isle of Wight

Cornwall’s team of 40's veterans made the long trip to the Isle of Wight at the weekend, and returned triumphant with an 8-4 win, their first of the season.

The Cornish men halved the doubles with their island counterparts, with Adam Widdison and Brian Gilbert playing particularly well to win a hard 3 ender.

Cornwall needed at least 2 of the mixed doubles to win the match, and Brian and Rachel duly obliged to win theirs, followed by Pete Bazin and Lorna Riggs with a fine win at number one mixed.

Al Riggs and Sue Biscoe completed the victory, and the team set off for the ferry, happy with a great result.
Posted by Cornwall Badminton at 22:28

Cornwall U17 Badminton Team travelled to Gloucester on Sunday 30th January, meaning a 5.45am start for some players . However, a fantastic team performance followed with a comprehensive 26 games to 10 win . This now moves the team up the South West Counties League and sets up some great matches in the next few weeks against Devon, Somerset and Wiltshire.

The Boys led by Sam Spencer at no1 made a clean sweep of the 6 boys singles. The girls took 2 of their 6 matches. In the Doubles our Boys again came up trumps taking all 9 matches and our girls excelled by taking 5 of the 9 matches. Some notable performances, primarily a new pairing of Georgia Higgs who is still County U15 and Hester Luke, taking 2 matches achieved added success. In the Boys making his County U17 debut partnering Christian Jasper, Chris Cooper made it 3 out of 3 wins.

In the mixed there were some fantastic matches, Kris Jasper and Beth Wotton going to the wire at no1 losing 21-19 26-24 a great match. However the teams strength in depth enabled a return of 4 wins to 2 in the mixed to finish on a 26-10 score line.

County Debuts by Simon Cox and Chris Cooper resulted in both boys returning a 100% success rate. County badges for representing your County on 3 or more occasions were awarded to Kris and Christian Jasper and Hannah Robertson.

Posted by Cornwall Badminton at 17:19