With their Captain still sidelined, the 60's went to Clevedon on Sunday 14th to play Avon 1st who were lying equal second to Cornwall in the league.

This was a crucial match to win in order to maintain this position. Without Brian, Bill Edgar again stepped into the side which was brilliant. Cornwall took three of the mens doubles, while the ladies matches were halved two a piece.

This meant that Cornwall needed two of the mixed to win the match. Unfortunately Chris and Phil lost theirs to England's Mike Cox, Celia and Bill just lost out in a three ender, Vera and Mike won theirs, so it was up to Pat and Tony. They won their first end, lost the second and were 18-13 down in the third but miraculously came back to win 23-21.

So Cornwall eventually won 7-5. A great achievement. Sunday 21st sees them entertain Avon 2 at St. Austell, by when it is hoped that Brian will have returned to full fitness and back in the side.
Posted by Cornwall Badminton at 10:15 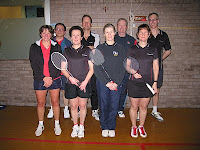 A great team effort and true fighting spirit was not quite enough to hold off the strong Dorset vets, as Cornwall 40s went down 4 – 8 at Polkyth on Sunday 7th February.

It was ladies day as the girls won 3, with Jan Santillo and Claire Peterson taking both games, and Lorna Riggs and Sue Biscoe one.

The men fought hard, 3 of the games going to the wire. Pete Bazin and “super-sub” Chik Tan were very unlucky to just lose out in both, despite superb defence, and Adam Widdison and Martin Burley came close against the 2nd Dorset pair.

The visitors duly took 3 of the mixed, and it was left to Chik and Sue to complete the match with a storming win in the last game if the day. 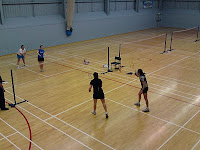 Jo and Rachel in action

Cornwall 1st team travelled to Berkshire on Sunday 31st January. Despite heavy snow on Bodmin moor, the team arrived in good time to face the promotion hopefuls. After a 10-5 defeat at Polkyth, it was anticipated that Berkshire would be strong at home, and this proved to be the case.

The venue was excellent, and Berkshire provided umpires for each game. These were closely monitored by Jane Hancock, top England umpire. Jane has officiated at all the top tournaments, including finals at the world championships.

Cornwall got off to a promising start, with Guy and Jo both taking their singles games, Guy having to fight through a tough 3 sets. After this, Berkshire proved the value of their training programme, with James and Guy the only pair to win a doubles, oddly beating their 1st mens pair, but losing to their second pair.

This left Cornwall needing all 3 mixed to bring home a point, but to no avail. Third pair Tom and Jo lost a tight game in straight sets. Then Guy and Rachel had a big three end game, showing strength of character to win 22-20 in the final set. James and Bronwen, in their first match together, fought well through another three setter, but were unable to capitalise on a match point against experienced opposition and went down 22-24.

The 60's were without their illustrious captain Brian for their match against Wiltshire on Sunday 31st who was still sidelined following a leg injury obtained last weekend at Gloucester.

However the team were strengthened by the inclusion of stalwart Bill Edgar who rekindled his successful partnership with Mike Nancekivell to easily take both mens doubles. Phil Oland partnering Tony Roberts for the first time also won both their mens games.

The ladies were unlucky not to win all four games, as Celia and Pat just lost out in an exciting three ender against the opponents number one pairing.

In the mixed element all four of Cornwall's pairings were successful and a 11-1 result was obtained.

This win puts the team in second position in the league, equal on points to Avon 1 who are their opposition at Clevedon in two weeks.
Posted by Cornwall Badminton at 10:01