53 badminton players from all over Cornwall and North Devon, gathered at the 8 court Sir Ben Ainslie Sports Centre in Truro at the weekend to take part in Cornwall Badminton Association’s latest Bonanza.

The idea of Badminton Bonanza tournaments is to give both social players and those who play league badminton a chance to try out and develop their skills against different players. The many regulars were joined this time by some very welcome new faces, some playing in a tournament for the first time, as the Bonanza goes from strength to strength, with any profits going towards developing new clubs in Cornwall.

This year’s tournament at Truro was another great success, with some close fought battles in all the 5 different disciplines. Cornish players dominated all the social events with Hayle’s Martin Penney winning a splendid hat-trick of titles, including pairing up with Rob Atkinson to beat the Bodmin family duo of Andrew and David Head in the men’s doubles, and in the mixed with Marnie Boston against Mohammed Dulal and Jo Southey. The St Austell pair of Kathy Vian and Jo Southey won the ladies’ doubles for the first time, defeating Zelda Bennet and Marnie Boston while Sanna Roff, another player from St Austell, retained her ladies’ singles crown from last year.

The league finals winners were shared between Cornwall and players from North Devon, as Tony Wong from St Ives won both the men’s singles and the men’s doubles with partner Junlong Yu, beating the scratch pairing of Trevelyan Searle and Karl Orchard. Chulmleigh’s Karen Parish and Michelle Wylde beat their Cornish opposition in the ladies. A strong contingent of students from Penryn saw Katherine Jeffery winning the ladies’ singles and taking runner up with partner Jake Turpie in the mixed.

Posted by Cornwall Badminton at 19:55

On Saturday 7th November Cornwall’s second team headed for Wellington in Somerset for the first matches of the season. With a mixture of new and experienced players in the team the first match was against a strong Devon 3 side.
The singles were up first. Sam Spencer, Lee Chapple, Emily James and, making their debuts for Cornwall, Sean Havis and Amy Cox, all fought hard but were beaten by strong opposition in straight ends. On to the doubles with Sam and Tony Clark playing to their strengths and defending well but just losing out 21-18 in the third end. New pairing Tom Lyle and Curnow Bascombe gelled well with Tom’s experience and Curnows dominance at the net they got Cornwall on the board with a straight ends win. The new ladies pairings of Emily & Kay Bossenger and Beth Rich & Tamzin Knuckey took to the court but found it tough against experienced opposition. Despite Emily’s power, Kays skilful net play and Beth and Tamzin’s determination they both lost in straight ends. Finally the mixed doubles with new pairs Tom & Kay and Lee & Amy both losing out. Final result Devon 10 Cornwall 1


The next match was against Somerset 2 and after a slight team reshuffle the singles were underway. Both Sam & Lee having grown in confidence pushed their opponents hard before losing in straight ends. Tony took on the third singles and after a slow start began to move his opponent around the court and won in 3 ends. Emily just lost out in three close ends and Tamzin battled hard against her skilful opponent before losing in 2. Having lost against Devon Sam & Tony showed great determination and attacking play to win in 3. Tom & Curnow also winning in 3. The ladies Emily & Kay, Amy & Beth found it hard against tough opposition and both pairs lost in straight ends. The last games of the day were Tom & Kay and Sean & Amy in the mixed both, pairs failing to find a way past the Somerset players. Final result Cornwall 3 Somerset 8.
The next matches are taking place on the 12th December at Exeter University against Dorset 3 and Isle of Wight 2o
Cornwall team : Emily James, Amy Cox*, Kay Bossenger*, Beth Rich*, Tamzin Knuckey*, Tom Lyle, Sam Spencer, Tony Clark, Lee Chapple, Curnow Bascombe* and Sean Havis*
*denotes first appearance for Cornwall seconds
Posted by Cornwall Badminton at 22:31

Cornwall’s top badminton players began the new season by taking the long trip to Cheltenham, where the first set of centralised matches in Badminton England’s new format were held at the weekend.
Each county team plays their regional counterparts once over 3 weekends, with matches being the best of 11 games. This time, Cornwall 1sts took on Wiltshire and Dorset in the new Division 3.
The match versus Wiltshire began with the 5 singles games, which featured 3 of Cornwall’s best young men and 2 girls. Making their debuts were the new county champion, 15-year-old Tyler Sillifant, and Milo Semonin, alongside the more established and older brother Liam Sillifant.
The boys got Cornwall off to a storming start, with excellent straight set victories in each of their games, and this was followed by a comfortable win for Vicki Thomas, and a narrow loss for Hester Luke after 3 ends of hard battle in the women’s singles.
Two games of men’s and two games of women’s doubles followed, and the honours were split with Wiltshire taking both women’s and Cornwall the men’s. The new pairing of Ross Lashbrook and Richard Townsend eventually triumphed after 3 close ends of attacking badminton and close defence, while the experience of James Whetter and Guy Michell saw off their opponents in fine style.
In the women’s doubles, both Cornish pairs, of Bronwen Wotton and Amy Polglase, and Hester Luke and Vicki Thomas fought hard but were beaten by the Wiltshire girls.
The match finished with 2 games of mixed, with Cornwall having already secured victory.  The Wiltshire pair were no match for number one pair and county champions Ross Lashbrook and Bronwen Wotton were no match for the Wiltshire pair, who they swept away in two easy ends, but the new pairing of James Whetter and young Amy Polglase found life more difficult in their game which they were unlucky to lose in 3 very tight ends.
So the match finished with a great start and an encouraging victory 7-4 to the young Cornish team, and they prepared for the next match versus Dorset.
This turned out to be much the harder match against more experienced opponents, and Cornwall’s young singles players struggled from the off, each of the boys losing in 2 ends despite some hard fought retrieving and good movement. Amy also lost in two, and although Hester won one end, fatigue set in and the Dorset girl triumphed.
Cornwall’s two men’s doubles pairs set about reversing the trend, and both won in three ends, and although the women’s pairs did well to push Dorset to three ends, they both just lost out unluckily.
Honour was again salvaged in the mixed, with Ross and Guy completing their 100% win records by pairing up with Bronwen and Vicki to comfortably win, and give a final match score of 7-4 to Dorset.
The next set of matches again takes place in Cheltenham, on December 12th, when Cornwall 1sts take on Jersey and Oxfordshire. 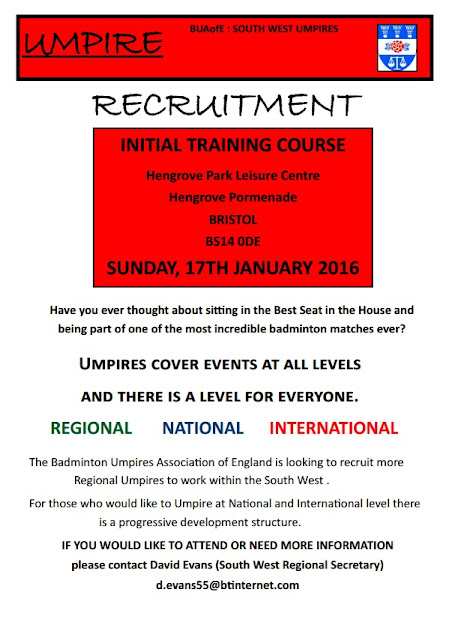 Posted by Cornwall Badminton at 18:10