Bonanza of Badminton at Penryn 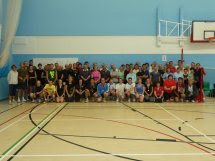 Penryn College’s purpose built badminton hall was full of enthusiastic players from all over Cornwall, and Plymouth, at the weekend – over 70 social and league competitors had a great day’s badminton in the latest tournament promoted by Cornwall Badminton Association.

The idea of Bonanzas is to bring together those who play both sociably and in leagues, to widen their experience and for a day of badminton against new opponents, and Saturday’s event was a big success, judging from the tired but happy faces leaving the hall, asking when the next one would be.

All funds raised from the tournament will go towards the Association’s aim of developing more community league badminton across Cornwall, and to help new clubs to grow.

Winners and Runners up in the various categories were –

FOUR MAJOR EVENTS IN THE DUCHY WITHIN A MONTH.

THE Annual Kerrier Junior Badminton Tournament, is being staged at the Truro School Sports Hall, Trennick Hill, Truro, on this Sunday, October 16.
The Event is being organised by the First Edition Junior Badminton Club, from Cornwall College, Pool, Near Redruth, sponsored by the Redruth Charity Trust, writes John Tresidder.

The Under-13’s have attracted an excellent entry of 68, from the South West Counties, including Cornwall, the host, with player registration at 9.30 am., prompt, with the singles matches getting away very soon afterwards.
Alan Williams, EBA, Mr. Cornwall Badminton, is the Tournament Secretary, with Alison Williams, acting as the Referee.

Supporters and spectators will be most welcome, with refreshments available.
Meanwhile, the Kerrier Junior U-15 and U-17 Events, are scheduled for Truro School, on Saturday and Sunday, November, 5/6, respectively. (Mr. Williams contact number: 01209 - 712 626).

Furthermore, on February 11, 2012, Mr. Williams is the Tournament Secretary for another BADMINTON England Bronze Under-15 Event, scheduled for Truro School, as well.

A most successful England Bronze Event, held at Saltash, with three youngsters recording a brace of wins and presented with gold medals for their efforts:
Meanwhile, Yesterday Week (Saturday, October 8), a very successful BADMINTON England Bronze Under-15 Tournament, was staged, at the Saltash Community College, Wearde Road, Saltash, for the first time.

Cornwall Youth Badminton, sponsored by Dairy Crest Davidstow, makers of the Cornwall Cathedral City Cheese, organised the proceedings, with over forty keen youngsters seen to contest the Singles, Doubles and Mixed Doubles Events, totalling five disciplines, on the Programme-of-events.
Play, throughout the day, was seen to be competitive, with camaraderie, to the fore, as usual.

Devon’s Lauren Theedom, whose general form has come on leaps and bounds over the past year, along with Joe Killoran, her county compatriot and Kyle Jones, from Yorkshire, all harvested a magnificent brace of victories, apiece and became proud recipients of England gold medals, for their sterling efforts
Meanwhile the Duchy’s Amy Polglase, Kellen Moore, Liam Sillifant (Brace), Ruth Barnicoat and William Bick were delighted to win England silver medals, in respect of finishing in the runner-up berth, in their events, respectively.
Sue Cooper, was the Referee, with Jenny Marchant, Chairman of Cornwall Youth Badminton (CYB), the Tournament Secretary.

Mrs Marchant expressed her grateful thanks to the following:
Alice Sporik, for signing everyone in and calling players to the bench; Sam Julian for shuttle control; Georgia Higgs and her friend from Wiltshire. Emma MacDonald, for filling in the results sheets and keeping the play moving; Chris Cooper for filling the results sheets in, in the Gymnasium.
Also, to Kerry Sillifant, her Husband and Mother, for organising refreshments and to Liz Laity and Cath Bick for running the raffle.
Finally, to Graham Drewey, the Site Manager at Saltash Community College, in respect of his co-operation and organisation on the excellent Day’s proceedings. 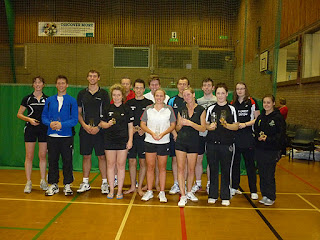 OVER 60 players from all parts of Cornwall, including an excellent turn out from Cornwall Youth Badminton, sponsored by Dairy Crest Davidstow, took part in two days of top quality badminton, in the Cornwall Senior “Closed” Badminton Championships, 2011/2012, held at Polkyth Leisure Centre, St. Austell, on the Weekend of September 24/25 and appreciated by supporters from far and wide, writes Sue Biscoe, with John Tresidder.

Many exciting games produced some surprise results, especially in the Weekend’ opener, the Men’s Singles, won by new champion, Callington’s Shane Maton, aged 22, from the Liskeard Club, for the first time.

Shane, in the semi-finals, accounted for defending champion, Kelvin Edwards, the Duchy’s senior coach, while Ross Lashbrook, the runner-up, had narrowly beaten Josh Pearce, who had accounted for the 2nd seed, James Whetter, in a closely fought battle in the quarter finals.

Meanwhile, a large entry in the Men’s Doubles, eventually resulted in a narrow victory in the semi-finals for the Plymouth Marjons’ Outfit, of Ross Lashbrook and Tom Lyle, over Shane Maton and Dave Harrington, to meet the defending champions, James Whetter and Guy Michell (St. Austell Bay), who were seen to retain their title, in an absorbing three games of attacking doubles. And, the Duchy number pairing’s excellent win, came on top of their registering the Men’s “Plate” at the Open.

The corresponding Ladies’ Doubles event threw up another surprise, when the new pairing of Emily James and Vicky Thomas (Falmouth/St. Just) - the winners in the Duchy Open “Plate”, 2011 - met Jo Philp and Rachel Irish, the established pair, defending their title of the last few years.
This final really had the crowd going, with the match see-sawing one way and another, before Emily and Vicky just triumphed in the third end, 22-20.
Indeed, for Vicky, based in St. Just, a Science Teacher at the Bolitho School, Penzance and a former Cornwall Schools’ player, this trophy win was the culmination of seven pleasing days of badminton.
The last event, on the first day, the Mixed Doubles, saw Guy Michell and Rachel Irish accounting for the number two seeds, Kelvin Edwards and Emily James, and reaching the final, to play the number one pair of James Whetter and Jo Philp, and despite some spectacular badminton, just failed to take the match from the champions, who won in two close ends.

Finally, the popular Jo Philp, aged 18 and a Truro College Midwifery Student, from Port Isaac, experienced a remarkable start to the new season: Over eight days, including in the 29th Duchy “Open”, held at Carn Brea Leisure Centre, the week before (September 17/18), she reached one semi-final and four finals, winning two of them. Well done, Jo and best wishes for the Cornish Chiefs’ new Inter-County Season, which gets underway, inOctober – away to Avon 3, followed by an away fixture against Guernsey, The Channel Island, on Saturday November 5.