Cornwall’s second and third county badminton teams travelled to Torquay to take on Devon 4 and Somerset 2. The second team’s first match was against Somerset 2 and they resumed their good form and after two tight singles wins for Tony Clark and Sam Spencer the rest of the team followed taking all but one of the games to win 10-1. The afternoon match was against Devon 4 their main promotion rivals. Wins in the singles from Tony, Melissa Lin and Mollie Bailey meant that Cornwall had a 3 -2 lead going into the doubles. After a solid win from Tony and his partner Sean Havis, Cornwall’s second pairing of Dave Harrington and Richard Townsend had to use all their experience to win their game in three very close ends. The women’s no 1 doubles pair of Amy Cox and Amelia Burrell secured the tie in Cornwall’s favour with an assured, straight sets win over their opponents. The final result Cornwall 2 wins 8-3. They are now top of the table with two more matches to play to complete the season later in March. 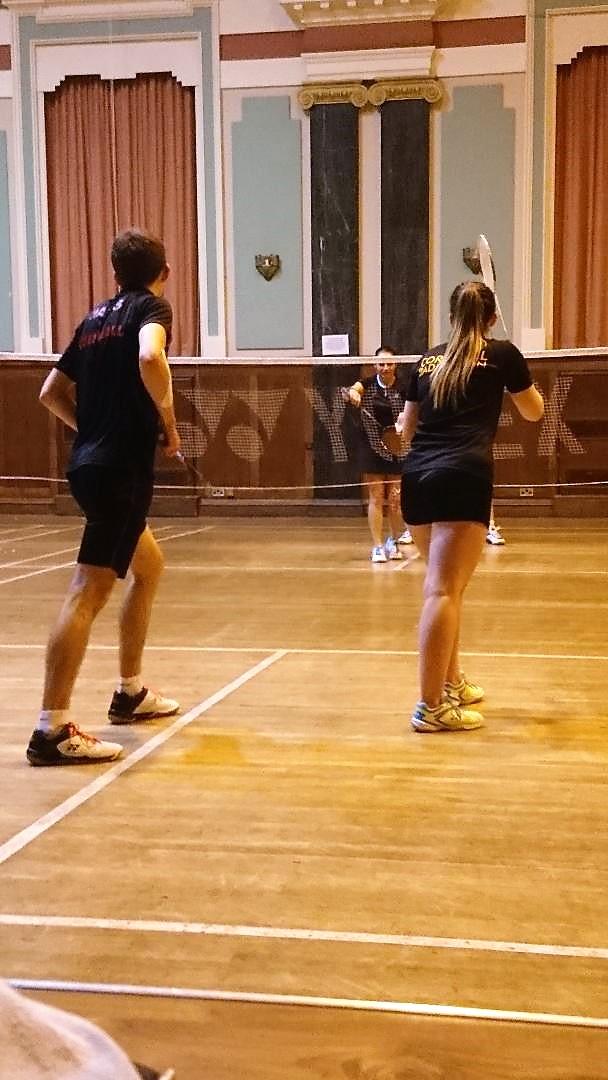 Posted by Cornwall Badminton at 18:36

Cornwall’s best badminton players took part in the latest round of Badminton England’s senior county championships in Bristol at the weekend with two very close matches.

First up was a strong Avon team featuring some young, skilful opponents which the top two men, Tyler Sillifant and Milo Semonin found too hot to handle. Honour was restored when experienced James Whetter gradually wore down the opposition and the Avon man eventually retired injured in the final end.

The Cornish girls’ singles players set out to make the score more respectable, with young Cara Collins having a fine win in two ends, followed by a gutsy performance from Kellen Moore to beat the Avon girl in three gruelling ends and make the match score 3-2 going into the doubles.

With the match score on 4-5 in Avon’s favour, the mixed games began with a nail-biting top mixed which saw Guy and Bronwen just edge a thrilling, see-saw game in the final end. Another new pairing of Tom and Amy also took an end off the Avon pair but unluckily could not secure the decider, and so the overall match score finished 5-6 to Avon after a long, hard-fought match.

More was to follow in the afternoon as the next opponents were Gloucestershire and the Cornish singles players stormed to a five-nil lead after winning all three men and both women’s singles, four of the games going to three ends showing the great determination and fighting spirit of the Cornwall team.

Gloucestershire came back in the men’s doubles with wins in both games as the players tired, but the Kellen and Amy pairing clinched the overall match with a superb win, giving Kellen an impressive 100% winning record for the day. Again, Cara and Bronwen came agonisingly close in their game after taking the second end, but went out undeserved losers in a tight, long third end.

The two mixed games were a step too far for the Cornish pairs, as Gloucestershire won both fairly comfortably to give a final score of 6-5 once again, but this time in Cornwall’s favour.


Posted by Cornwall Badminton at 18:34

Cornwall's top veteran badminton players have just returned from a weekend of inter-county matches at Badminton England's Challenge event in Bournemouth. The over 50 and over 65 teams joined other players from all other southern England in the annual competition over two days of top badminton and socialising.

On the first day, the over 50s, resplendent in their new kit, had a great start, beating Oxfordshire with fine wins for Kath Wotton and Jan Santillo in the women's doubles plus Pete Bazin and Lorna Riggs and Bob Bell and Lynda Beer in the mixed. It then became harder as the teams went down to a strong Kent team despite another good win for Kath and Jan, followed by defeat to Avon, although again Pete and Lorna took first mixed. Saturday ended with a rather crunching defeat to Hampshire, as the Cornish players tired and old injuries took hold.
The over 65 team battled valiantly in their three matches on day one, despite being short of one player as stalwart Pat Edwards couldn't make the trip due to illness. Captain Brian Hannibal and Celia Hillman took the mixed doubles against Dorset, looking strong and skilful, but overall defeats to Surrey and Berkshire followed as the team always conceded one game for each match.

Day two dawned after an excellent evenings dinner dance, and the over 65s had an early start taking on the Avon veterans, this time with an exciting win after George Whetter and Brian Gilbert won a thrilling three ender, backed up by another fine victory by Brian and Celia, also in three ends. Although the two Brian's won their men's doubles, the team then lost to Devon, and finally Wiltshire, to cap off a hard but enjoyable weekend's badminton.

The over 50s team had two matches to play on the Sunday, which proved a bit too much for tired and injured bodies, so defeats to Devon and a strong Sussex team followed, but team spirit remained high as the Cornish players made the long trip home after an enjoyable weekend.

Posted by Cornwall Badminton at 18:31

Twenty-three players from all over Cornwall aged from 40 to 71 played in this year’s championships at Polkyth Leisure Centre in St Austell. The tournament was split into two sections of under and over 55 years, with age points handicaps.


The combined women’s doubles were evenly matched between 5 pairs with some tightly fought, skilful matches on display. Winners of the under 55 section were a new pairing of Liskeard’s Janet Santillo and Jane Barber from St Austell, combining speed and power to win all their games except against the over 55 champions. Runners up were another new pairing from Penzance and Bodmin, Vicki Thomas and Helen Beer. 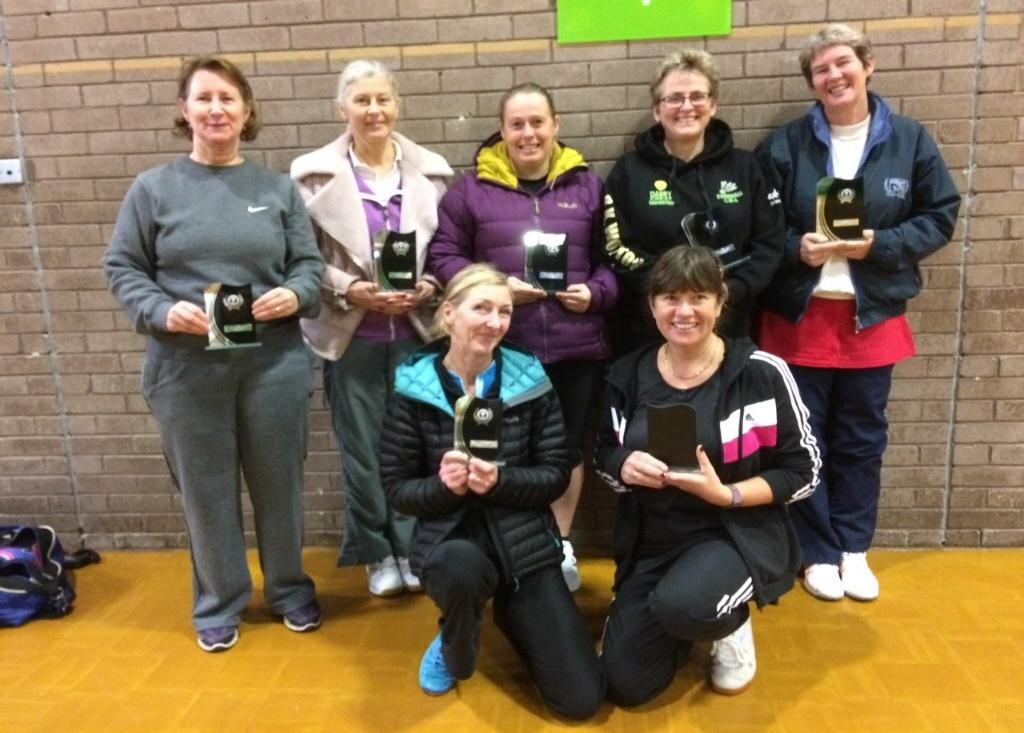 
In the older women’s age group, seasoned campaigners Kath Wotton from Camborne and Lynda Beer of Callington triumphed with their all court game, while the established pair of Truro’s Sue Biscoe and Lorna Riggs from Newquay came close runners-up.


Seven pairs in the combine men’s doubles battled against big points differences to give some absorbing games. The top two pairs in both sections dominated, with St Austell’s James Whetter and Pete Bazin winning the under 55 group, and Calligton’s Bob Bell partnering Richard Jones from Liskeard to comfortably win the over 55 section. Runners-up were Pool’s Gary Braunton with his partner Tony Wong from St Ives, and Brian Hannibal and George Whetter from Penzance and St Austell. 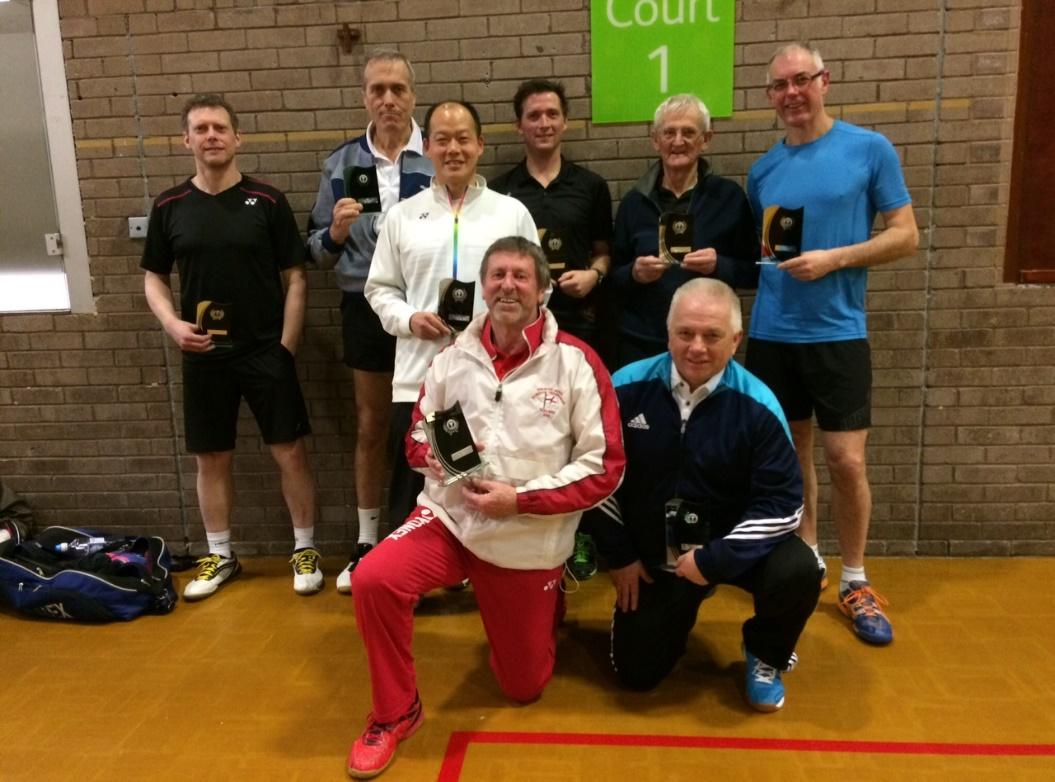 Happy chappies from the mens doubles


The final event of the day was the combined mixed doubles for 7 pairs, again with the challenge of points differences for the younger players taking on the over 55s. James Wetter and Vicki Thomas only dropped one point to win the under 55 group from runners-up Jon Wyatt from Liskeard, playing in his first Cornwall championships with Janet Santillo. Once again, in the older category Bob Bell and Lynda Beer were too strong for their opponents, with runners-up Brian Hannibal and Celia Hillman closing the end of a long, enjoyable days badminton. 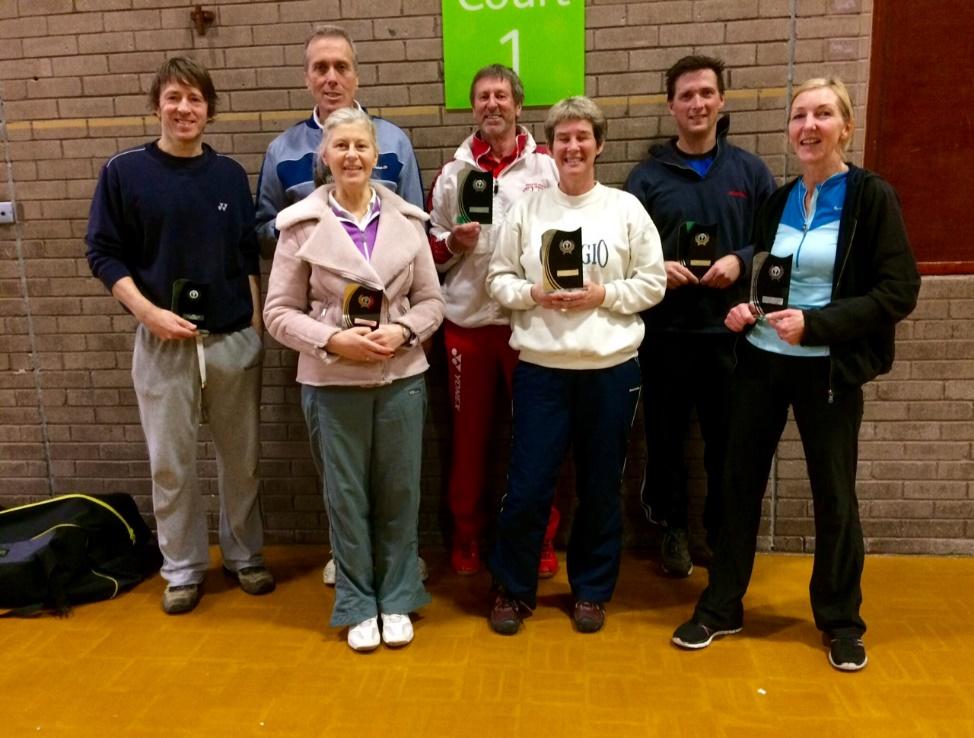 
The next veterans event for Cornwall’s over 55 and 65 teams is to head to Bournemouth at the weekend for Badminton England’s Masters Challenge to take on other counties in the annual competition.
Posted by Cornwall Badminton at 09:30