Best in the West Badminton 2019

Top league badminton players from all over mid and west Cornwall gathered at Penwith College’s sports hall at the weekend to find out who is the best in the west. 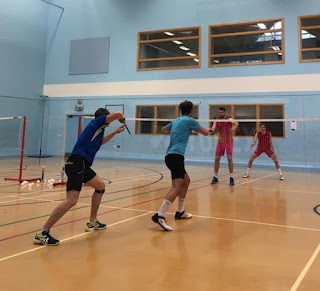 The day started with the level doubles, with some fine matches in both the men’s and women’s. In the open category, sisters Mollie and Beckie Bailey from Camborne’s First Edition club were unbeaten and all conquering, with Yin Ling Tan from Penryn teaming up with Mounts Bay’s Vicki Thomas to take the runner up slot, and the restricted winners were the Tecans club’s Katie Phelps and Anne Herlihy from Pool. 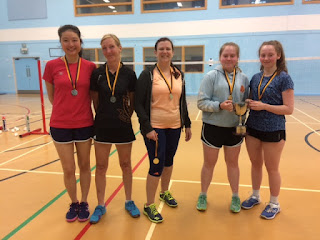 womens doubles winners and runners up 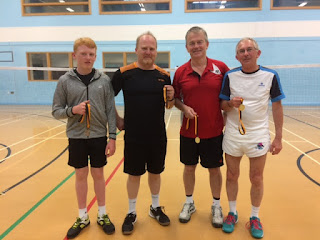 
Both men’s finals were so close and evenly matched, as the restricted category saw the Mounts Bay men, Mick Wicks and Simon Norris beat the father and son Tecans pair Peter and Ollie Beaumont by just 4 points. Even better was to come in the exciting open final between First Edition brothers Jack and Harry Dyer against their rivals from Tecans Chris Glasson and Sam Spencer. The first end was comfortably won by Chris and Sam 21-12 but the Dyers fought back in the second to take a commanding lead, then the Tecans boys just managed to get the one score they needed to land the title on points, but only by one! 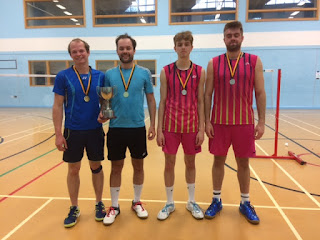 winners Chris and Sam with Harry and Jack

A welcome break followed and with the players fortified by Cornish Oven pasties, the mixed doubles began. In the restricted category Ollie Beaumont won with young partner Joanna Vyvyan beating the experienced Tecans pair Steve Glasson and Anne Herlihy. The two semi-finals in the open competition were some of the best games of the day as Penryn’s Alex Shaw and Yin Ling Tan beat First Edition’s Josh Richards and Beckie Bailey by a nail-biting score of 21-20 21-20, and their club colleagues Jack Dyer and Mollie Bailey edged out the Penzance duo of Will Bick and Vicki Thomas. The first end of the mixed final was very close but in the second Jack and Mollie pulled away to win the title this year. 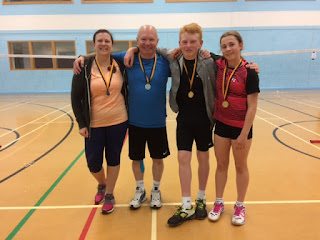 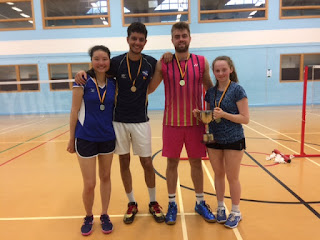 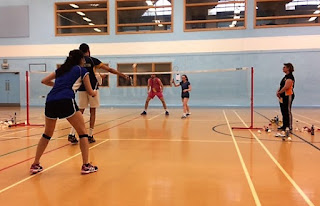 action from the mixed final, with scorer Lorna
The singles events completed the day and, in the women’s, Mollie Bailey was again unbeaten although the promising Joanna Vyvyan pushed her close. Ollie Beaumont took his second medal in the men’s restricted by beating his dad Peter on points. 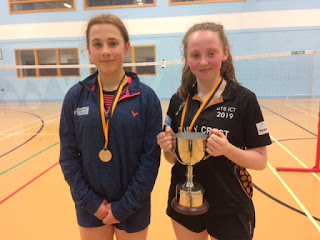 winner Mollie with runner up Joanna
It was another family affair in the men’s singles as Harry Dyer took on his oldest brother Jack in the final. Both players had had some challenges in their groups with Josh Richards beating Jack, and Harry being pushed by middle brother Elliot but both had won overall to reach the last game of the day. 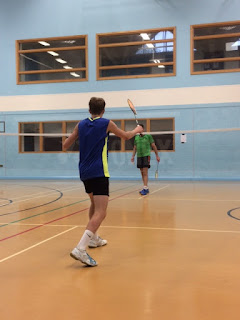 mens singles final
This game was a thrilling spectacle with Harry’s speed and reactions against Jack’s power and placement, and Jack built a lead only for Harry to gradually whittle it back before the younger brother won by a narrow 21-19 to take the title and end another successful tournament. 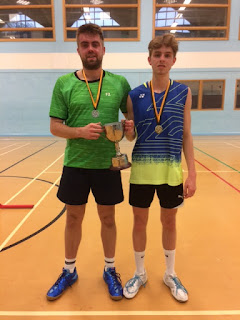