There is a Bonanza tournament planned for 1st November 9am – 6pm. The venue is the new 8 court Sir Ben Ainslie Sports hall at Truro School.

There will be separate Social and League categories:


Posted by Cornwall Badminton at 20:39

There was a feast of Cornish badminton for all over two busy days at Polkyth Leisure Centre, when the top players from the county contested this year’s Championships. Entry numbers were excellent and were once again boosted by a good number of the up and coming young players from Cornwall Youth Badminton.
On the first day the men’s and women’s singles plus the women’s doubles were the order of the day. After an absorbing few opening rounds, the original 28 men were whittled down to the top 4 seeds in the semi-finals. The closest game saw number 1 seed and defending champion Shane Marriott come through a tight three-ender against training partner Ross Lashbrook, the number 4 seed. In the other semi, number 3 seed and former champion James Whetter, took on the young number 2 seed, Liam Sillifant, who had beaten the promising Milo Semonin in a closely fought quarter final. James used all his experience to defeat Liam in 2 ends to take him to another final with Shane. Although the first end could have easily gone either way in a thrilling see-saw game, Shane’s speed and fitness won through in the second end and he retained his title. 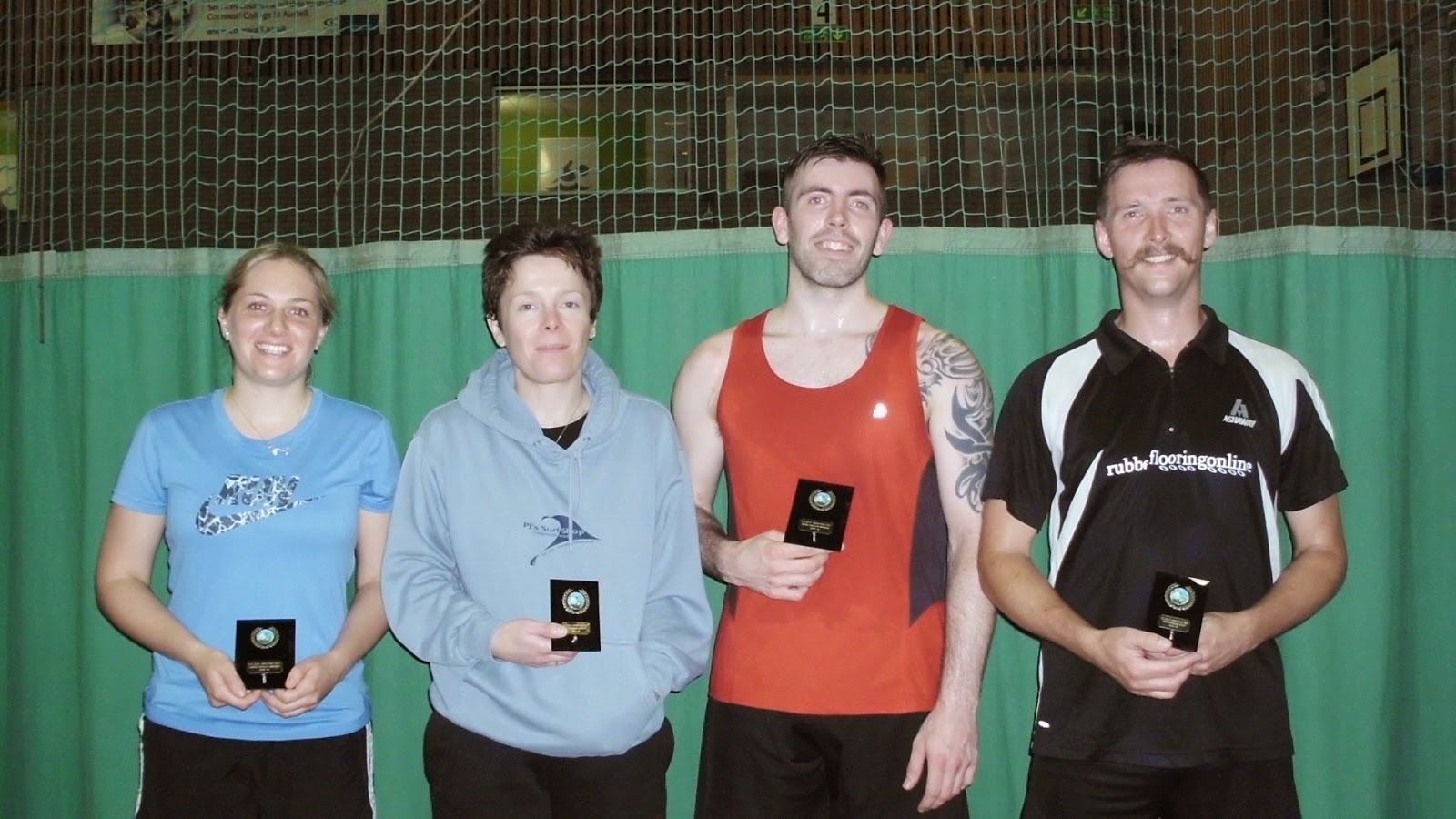 The women’s singles pitted some rising stars against the more established players, as former champion Jo Philp gained revenge for last year’s defeat by the younger Kellen Moore in the first round, and Emily James, the number 2 seed, beat last year’s finalist Hester Luke in the quarter’s.  The number 1 seed, defending champion Rose Willis, had beaten Jo to get to the final again, but was hampered by a back injury. Emily showed her steadiness and power in winning the final, after a tight first end, she became the new champion for the first time.
The men’s doubles began with 17 pairs, and the large crowd witnessed some exciting attacking badminton as the rounds progressed. The top seeds, Shane this time paired with Ross, had a very narrow victory in the quarter finals over Dave Harrington and Richard Townsend, who showed some dogged defence and steady play. In the semis, Shane and Ross had an easier ride against  4th seeds Tony Clark and Sam Spencer, while in the other half of the draw, the second seeds and defending champions, James and Guy Michell had swept through their rounds to reach the semi final. Here they came up against the 3rd seeds, Tom Lyle with new partner Kahoo Tse, in one of the most spectacular games of the weekend. Having lost the first end, James and Guy narrowly won the second, and then powered their way through the 3rd, but not before Tom and Kahoo had given them a big fright with their attack and clinical defence. In the final, Ross and Shane’s speed and agility won them the title, as they became the new champions in 2 ends despite James and Guy spirited defence. 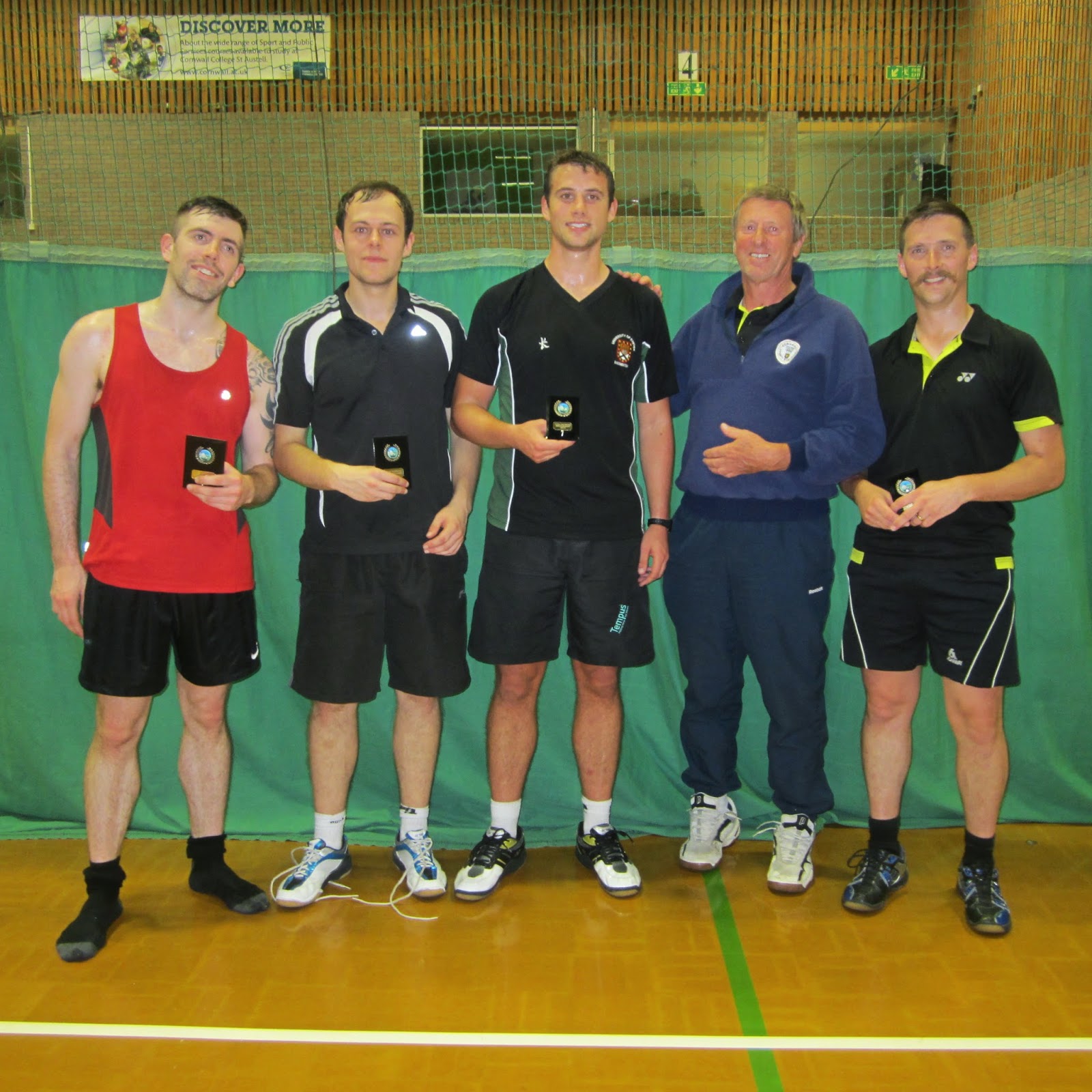 The women’s doubles event threw up the most surprizes, as holders Jo Philp and the under-strength Rose Willis, were beaten by the excellent young pair, Kellen Moore and Amy Polglase in the semi finals, once again demonstrating their skill and exciting promise. The second seeds, Emily James and Browen Wotton, had breezed through the final, but faced a much sterner test against Kellen and Amy, who came through deserved winners, and new champions in two stylish ends.
Finally, the mixed doubles event was fought out by 17 pairs, and once again the top 4 seeds reached the semi finals fairly comfortably. The number 1s, Shane and Jo , defeated Guy and Emily in the top half of the draw, while James and new partner Kellen, were beaten by the number 2 seeds Ross and Bronwen. The final was one of the best games of the Championships, and no quarter was given by any of the 4 players, as the crowd witnessed amazing net play by the girls and attacking power and retrieval by the men. Ross and Bronwen just won the first end 22-20, and the match continued to go one way and the other for the next half an hour. Shane and Jo’s speed and strength finally won through and they became this year’s new champions, to round off Shane’s hat-trick, and a great weekend of badminton.
Results:
Men’s Singles – Shane Marriott beat James Whetter 22/20, 21/13
Women’s Singles – Emily James beat Rose Willis 24/22, 21/7
Men’s Doubles – Shame Marriott/Ross Lashbrook beat James Whetter/Guy Michell 21/16. 21/17
Women’s Doubles – Kellen Moore/Amy Polglase beat Emily James/Bronwen Wotton 21/16, 21/18
Mixed Doubles – Shane Marriott/Jo Philp beat Ross Lashbrook/Bronwen Wotton 20/22, 21/18, 21/17
Plate event winners:
Men’s Singles – Anthony Clark, Women’s Singles – Browen Wotton
Men’s Doubles – Bob Bell/Nick Phelps, Women’s Doubles – Hester Luke/Vicki Thomas
Mixed Doubles – Richard Townsend/Emma Ziajka
Posted by Cornwall Badminton at 20:19