U21 Championships & county vets tournament have now been cancelled due to the current situation. It is hoped to play them later in the season.
Posted by jaydubyuh at 06:52 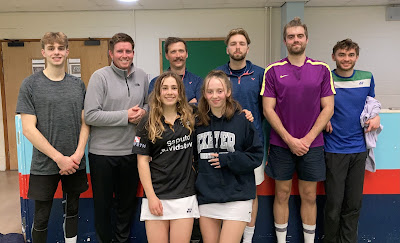 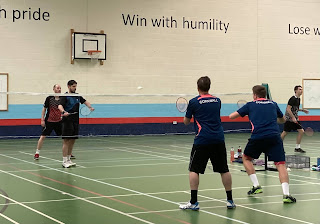 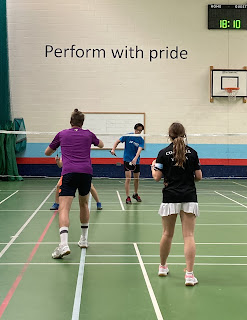 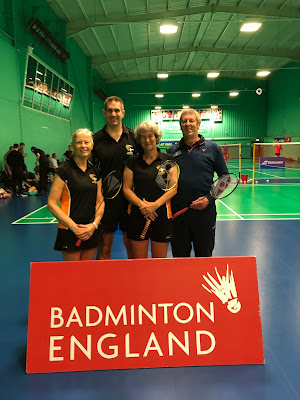 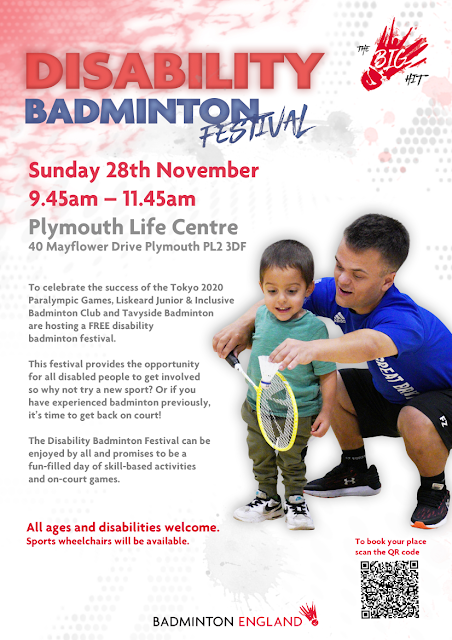 There was a welcome return of Cornwall County Badminton’s Restricted Championships last weekend at Cornwall College’s Pool sports hall after a long missing year, to find the top players in the county once again. Familiar faces met new talent, and reunited with players making comebacks in a celebration of competitive badminton.

Day 1 featured the men’s singles and doubles, and top seed Harry Dyer from Truro progressed to the final, but not before a three-ended battle with clubmate Josh Richards. 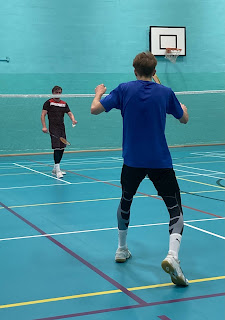 Waiting for Harry in the final was Milo Semonin, returning to Cornwall from his university course.  After an impressive start by both men, there was a long delay for the unfortunate Milo who went down with cramp, but recovered to continue before Harry’s speed and style won his first singles title. 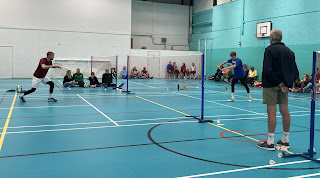 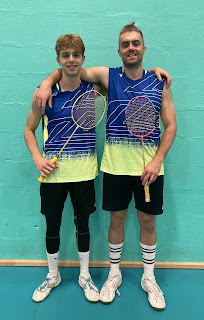 In the men’s doubles there was a strong line-up of experienced and newer pairings, with the four seeded pairs making it through to the semi-finals. Launceston’s Tom Lyle paired up with Elliot, the middle of the 3 Dyer brothers playing, and they beat Jack and Harry Dyer in a great display of tactical, attacking badminton. 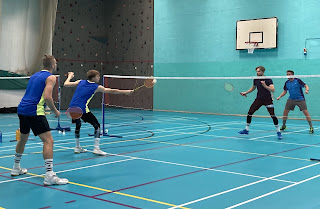 In the other semi, Milo and former singles champion Tyler Sillifant from Launceston just edged out the experienced St Austell pair of James Whetter and Guy Michell in two tight ends. 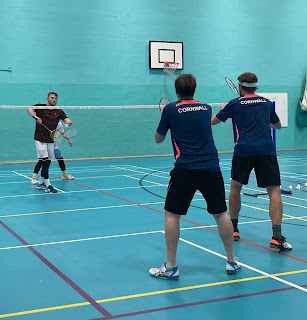 Milo and Tyler were no match for Elliot and Tom in the final, who gave a powerful demonstration of successful doubles play to win. 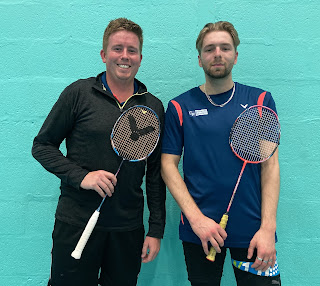 Day two was ladies day in Pool, the morning given over to singles and doubles, and dominated by Cornwall’s international player from Liskeard, Cara Collins, who comfortably won the singles competition for the third year, with the promising Joanna Vyvyan coming second. 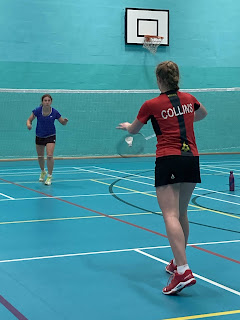 Cara teamed up with Camborne’s Bronwen Wotton to win the doubles, outpointing the evergreen Lynda Beer and Jan Santillo from Callington and Liskeard. 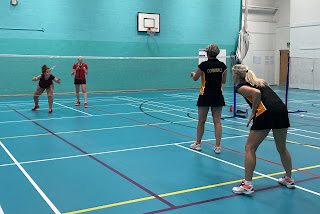 A good entry in the mixed doubles with pairs from all over Cornwall, saw the four seeds progress to the semi-finals, where Harry and Cara swept away elder brother Jack and Joanna. 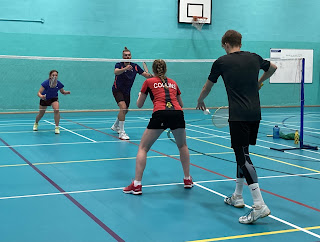 Disaster struck in the other match between Tom and Bronwen, playing James and Jo Spooner, making her welcome comeback. After winning an exciting first end, Tom and Bronwen were looking good before Bronwen had to concede following a leg injury. 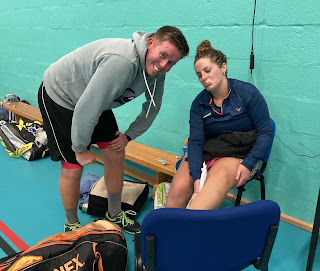 Once again, in the final Harry and Cara stormed to victory over James and Jo after some stunning rallies to retain their title and help Cara become a triple champion for the third year in a row. 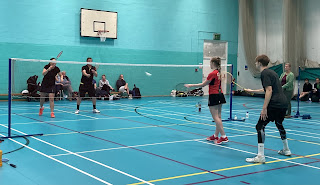 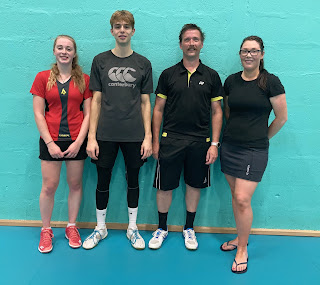 In a new venture organized by Badminton England, each of the winners will be invited to play in the Champion of Champions event against other counties at the National Badminton Centre in Milton Keys in December – a great opportunity to showcase Cornish badminton. 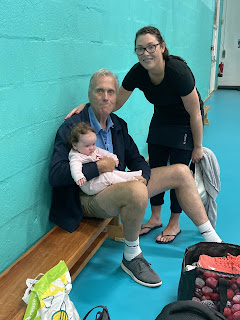 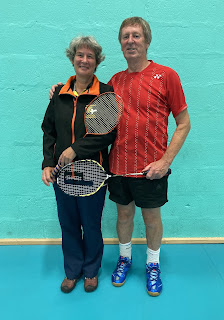 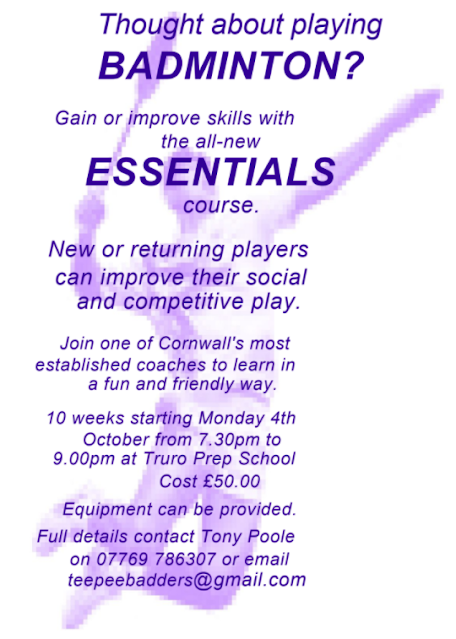 Welcome to the 2021-22 Cornwall Badminton Season. We hope you’re having a good break and are raring to go! Please note -

All players should attend practice & Training, enter the Restricted, and attend the Trials. We welcome those who have graduated from the under 18s to all of these events.

Matches: all matches will be played on fixed dates at central venues (tbc) - please note (and be available on!) the following dates –

Match fees will be confirmed later once we have heard details from Badminton England. Match players will also be expected to contribute towards any accommodation costs for the March weekend.

Please let us know asap if you will NOT be available for any of the above.

If you have any questions, please contact one of the Selectors if you need any information in advance, or we can see you at the first practice and training. Thanks, and have a good season!

Team selections will be made on the basis of results in the Restricted, Trials (final Trials Decmber 5th) and performance at training sessions. Restricted Champs entry forms available here – please organise your partners!

We would be grateful for help with any of these events – please support your hard-working committee!

Coach James Elkin put the Cornish players through their paces today at Cornwall College’s Pool sports hall, in scorching hot conditions. The players all worked really hard and enjoyed three hours of great coaching and court play, getting ready for the new season ahead.

The next training session is on Sunday August 8th 1pm-4pm with James, at Pool - get in touch with any of the selectors if you’d like to come. 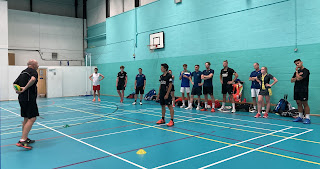 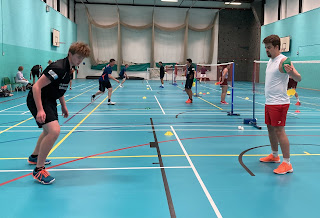 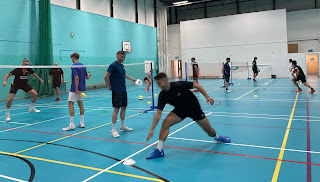 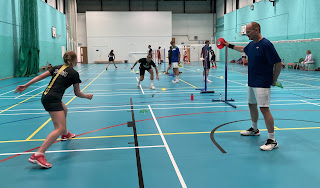 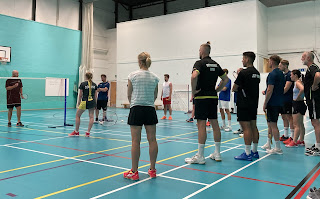 And finally
Posted by Sue Biscoe at 16:23

Sadly we have to report the death of John Tresidder.

Many of you will remember him from his role as Publicity Officer for Cornwall Badminton, or as a mainstay of the organising committee for the Duchy tournaments over many years.

John was one of the most enthusiastic and passionate supporters of badminton in Cornwall you are ever likely to meet. He even named his house ‘Chy badminton’.

I have visions of his singles strategy, running round his forehand in order play what can only be described as an immense backhand. Despite being a big man, he and his mop of hair, were surprisingly agile and he covered the court with relative ease.

Those people within Cornwall badminton who knew John will have many fond memories of him and we send our sympathies and good wishes to his family in these difficult times. 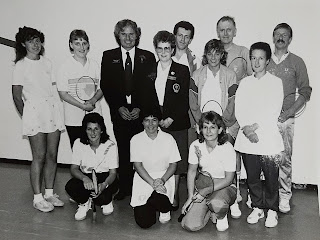