NOT ONLY HAS CORNWALL JUNIOR PLAYER GEORGIA HIGGS BEEN SELECTED AS ONE OF THE FIVE YOUNG SPORTS AMBASSADORS TO BRING THE OLYMPIC FLAME BACK TO CORNWALL, SHE WILL ALSO BE DOING THIS IN THE COMPANY OF DAVID BECKHAM!!

Georgia was selected from Helston College for her commitment to sport and for promoting the Olympic values of friendship, excellence and respect within the college. Georgia has been helping to organise a local primary school festival inspired by the London 2012 Games and including an opening ceremony.

Georgia said: "I have always loved participating in numerous sports, so to be given the opportunity to partake in the world’s greatest sporting event is just incredible. I'm so proud to be part of this experience and to bring the Flame back to Britain, as well as my home county of Cornwall, is utterly amazing. I know it will be something I will always remember!"

Georgia, David Beckham, and the rest of the party will head to Athens for Friday’s official handover ceremony of the Olympic flame from Greece to the UK, and bring it back to RNAS Culdrose ahead of the torch relay, which begins at Land’s End on Saturday morning.

Bob Bell, a member of the Tecans Badminton Club, based at Pool Community School, near Redruth, in partnership with Janet Fletcher, from Derbyshire, lifted the Mixed Doubles Event, where they accounted for the holders, Christian Hansen and Gitte Rasmussen, from Denmark.

This was Bob's fourth title in the prestigious Chmapionships and the success comes on top of him being awarded numerous. England International Veterans Caps, to date, as well as being bestowed with the supreme honour of captaining the Rest of Europe Vets v Denmark, in the past.

Players from fourteen countries, as far afield as Malaysia and Canada, were represented, with 320 competitors, in total competing over the four days of the competition.

Bob, a retired Science Teacher, who is also a playing member of the Cornwall County Senior 2nd Team commented:

"It was a fantastic Event and I was delighted to register my 4th All England Seniors Title, this time in tandem with Janet Fletcher.

"In addition my Club, Tecans, has experienced a great deal of success for this 2011/2012 season, winning the West Cornwall Badminton League's Combination, Mixed and Men's Divisions.

"These successes would have made our Tecans Founder and Club Secretary, the Late Pat Hollands, MBE, who passed away in 2010, a very proud Lady, indeed."

Lynda Beer, another Cornwall County player, had a tough draw in the All-England with her O50 partner, Yorkshire's Carl Sadler However, the combination out-pointed a Singapore pair, but went down, valiantly to a German seeded pair.

Preparations underway for Sofia, in Autumn:

Bob's next Tournament is the European Seniors' Championships, scheduled for September, 2012, in Sofia, Bulgaria, where he has been selected to play International O60 Men's Level Doubles and Mixed Doubles, with Lynda chosen to play in the O50 Ladies' Team in the same Event.

Bob Bell continued: "In the last Europeans, held in Ireland, in 2010, I was awarded silver and bronze medals and would like to win a gold, this time around - my keeping fingers crossed."

Bob and Lynda - well done, from the Cornwall County Badminton Association. Have a relaxing Summer and best wishes for the circuit training, in preparation for Sofia. 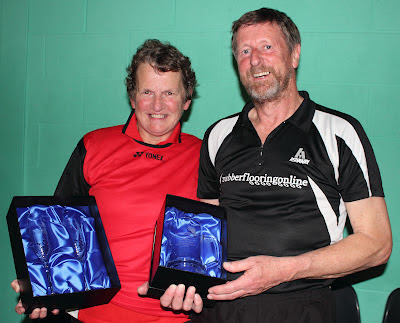