A RECORD ENTRY was recorded for the Cornwall Under-21 Badminton Championships, 2011/2012, with over 40 competitors competing in the five disciplines of play, on January 2, at the Tregorrick Park Sports Centre, St Austell, which provided the excellent location for some fantastic matches, which bodes well for the Duchy’s future, writes Kelvin Edwards.

In the Men’s Singles, Liam Sillifant from Launceston, although only Under- 15, proved himself well in reaching the quarter finals. With the exception of an under-the-weather Sam Spencer (First Edition), the four seeds took their places for the semi finals. A great tussle between Josh Pearce (St Austell) and Kris Japer, an up-and-coming Under-17 from Launceston, provided the first shock of the day, with Kris winning through against the number two seed in straight sets.

The other semi was the clash of the big hitters with Cornwall First Teamer, Ross Lashbrook, from Launceston and Chris Glasson (Tecans), providing an excellent match, full of fast rallies and big jump smashes, a real crowd pleaser. Ross ran out the winner, and the defending champion showed no mercy in the final against his club-mate, Kris, with his experience dominating the game, crowning him champion with a 21/14, 21-13 win.

Ladies’ Singles – an array of fantastic ties:
The Ladies’ Singles also provided some fantastic ties and proved the strength of Cornish Youth Badminton (CYB), with five of the eight quarter finalists being Under-17, or younger. Amy Polglase (First Edition), an Under-13 player, gave an excellent performance, worthy of note, gaining her last eight place by beating the seeded Lorna Garbett. Amy then lost out in the quarter finals to Under-17 Hester Luke (Mount’s Bay) in a contest that went right to the wire. Kellen Moore (First Edition) also proved to her doubles partner, Amy that she can beat the seeds, by taking her place in the semi-finals with a 21/15, 21/13 victory over Daphne Luke (Mount’s Bay).

The semi finals was just a little out of range far for Hester and Kellen with the top seeds, Jo Philp (Camelford) and Bron Wotton (First Edition) winning through in straight sets. The final was another contest of a rivalry that has spanned many years and with some hard fought rallies, Jo successfully defended her title with a 21/14, 21/15 success over Bron.

The Men’s Doubles saw Josh Pearce and Chris Glasson, the favourites and the Ross Lashbrook and Sam Spencer combination, the number two seeds, take up their position in the final untroubled. However, Jake Brazewell and Ben Johnson, Cornish Under-17 players, gave pleasing performances, by gaining their place in the semi finals after battling through from the middle of the draw. The final proved a superb spectacle with evidence of good tactical play alongside hard-hitting and counter defence, with Ross and Sam running out the eventual winners, 21/17, 21/10.

There were some explosive rallies and some upsets in the Ladies’ doubles. The number two seeds Bron Wotton and Daphne Luke went out in a nail- biting three end encounter to Under-17 Rachel Collard and Hannah Robertson. This set up a semi final against Kellen Moore and Amy Polglase who after some exceptionally long rallies took their place in the final. In the other half of the draw, Jo Philp and Abi Logg (Launceston), the number one seeds, earned their place in the final after an equally lengthy and tense tussle against the duo of Lorna Garbett and Claire Whitmore.

Ladies’ Doubles Final proves dramatic:
The final proved no less dramatic with the younger players, Moore and Polglase defying the number one seeds of a walk-over, with a gritty performance. However, tactically the number ones out-positioned their younger opponents and, by no means easily, secured the final, 23/21, 21/19.

Mixed attracts sixteen pairs:
No less than 16 pairs started out for the mixed doubles event, and the large crowd of supporters and spectators were treated to some outstanding contests.

Indeed, the seeding committee must have been happy with their predictions as the four seeds dutifully took their places for the semi finals. Jo Philp and Chris Glasson held on to secure their slot in the final, narrowly defeating Josh Pearce and Lorna Garbett, 25/23. Bron Wotton and Ross Lashbrook had it slightly easier, but it did not all go their way and found Beth Rich (Mount’s Bay) and Chris Grout (Launceston) extremely tricky.

The final of the Mixed Doubles, between the Philp/Glasson and Wotton/Lashbrook Outfits, will now be contested on Friday, February 17, at Polkyth Leisure Centre, St. Austell, starting at 7.00 pm. This promises to be an event “not to be missed”, entry is free, but arrive early to secure your seat!

Indeed, Jo Philp and Ross Lashbrook, in their partnerships, will be bidding for a personal hat-trick, apiece, on this date.

Finally, a massive thank you to Dave Spencer and Emily James for their tireless work on the running of the event; it would not have not been possible to run the proceedings without them. Also, to Paul and the Management & Staff of Tregorrick Park for providing such a professional approach to the Championships.
Posted by Cornwall Badminton at 15:42 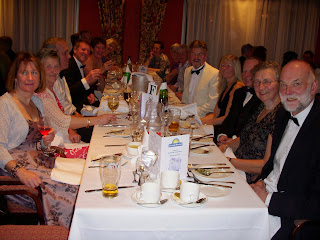 Badminton’s over 45 and 60s teams had a great weekend of veterans badminton in Bournemouth, playing against other counties from all over the south and west over 2 days of top class play.

The 60s team, led by Brian Hannibal, came an excellent 2nd in their group, after some tense and exciting battles against the likes of Devon, Sussex, Surrey and Dorset.

The 45s team, playing in this age group for the first time, finished a very creditable 3rd, following some close encounters with Buckinghamshire, Surrey, Wiltshire and the Isle of Wight.The annual weekend, organised by Badminton England, is always an enjoyable feast of badminton where the counties’ top vets display their skill and cunning in competitive matches, as well as their best moves on the dance floor on the Saturday night.

Not only did Cornwall’s teams do well on court, they were also voted best-dressed county, in their immaculate evening finery, and smart new daytime playing shirts. 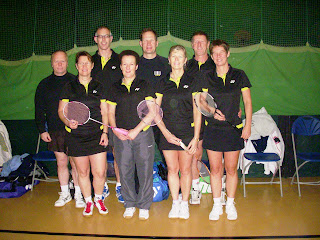 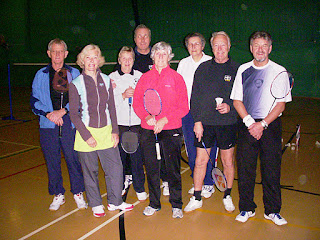 Posted by Cornwall Badminton at 09:30