In Penwith College's sports hall at the weekend, the West Cornwall Badminton League held their annual championships and around 40 players representing clubs from all over west Cornwall took part.

The day started with the men's and women's doubles with some close fought matches resulting in the men's winners from the Tecans club in Pool, Chris Glasson and Sam Spencer beating First Edition's (Camborne) brothers, Jack and Elliot Dyer. 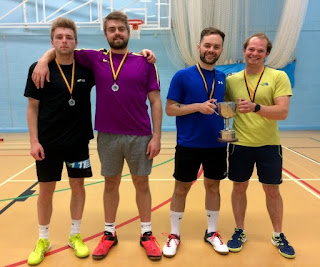 Chris and Sam with runners up Jack and Elliot

In the men's restricted category, two scratch pairings led to Chris Cordell from Truro, and Jake Turpie from Falmouth triumph over the young pair from Cornwall Youth Badminton, Potae Sheppard of First Edition, and Alexander Beaumont from Tecans. 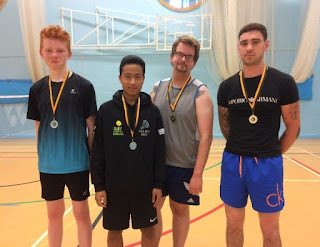 Winners Chris and Jake with Jake and Potae

In the combined women's doubles there was high level play throughout, and in the end tournament organiser Amy Cox and her partner Yinling Tan both from the CSM club in Penryn university beat sisters Mollie and Beckie Bailey from First Edition in an exciting match. 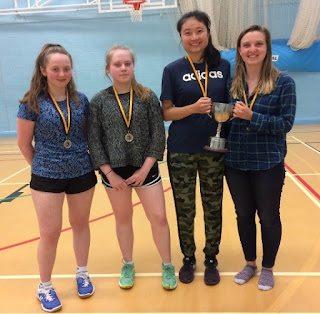 After refuelling thanks to The Cornish Oven pasties, sponsored by Glasson's Garage, the players started the combined mixed doubles event. Eventually, after some tight games, the final was between Chris Glasson and Kellen Moore from Tecans against the First Edition pairing of Jack Dyer and Mollie Bailey, and Chris and Kellen just came out top after a see-sawing battle. 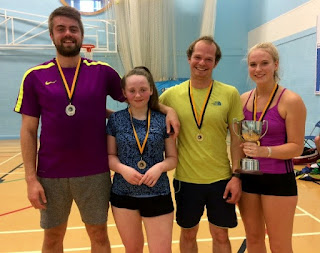 The last events of the day were the men's and women's singles - in the men's restricted the young doubles pair were this time against each other, with Potae Sheppard narrowly beating Alexander Beaumont. The open men's event saw Jack Dyer, who had beaten title holder Sam Spencer, finally get revenge over Chris Glasson and take the singles title for the first time. The women's singles was won by first team county player Kellen Moore, who just edged out Mollie Bailey in a nail-biting game. 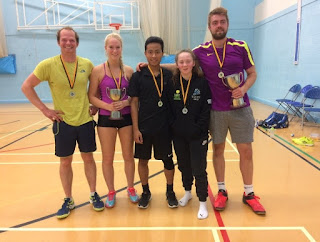 And so the championships came to a successful end as the weary players dispersed to catch up on Royal weddings and FA cup finals.

On the 7th and 8th of April, Cornwall badminton competed in the 17-20 English County Challenge, which took place in York. After taking over 10 hours to get to York the previous day due to a broken down mini-bus, the team faced an exciting challenge against a number of top players from all over the country.

Their box consisted of teams from Cheshire, Yorkshire and Lincolnshire. The first match against Cheshire was a huge success, with Cornwall winning 6-0 and only dropping two sets.
Their second match against Lincolnshire proved to be a tougher challenge. It all came down to the final mixed game in which Milo Semonin and Ellie Watkinson fought hard but lost in three sets, meaning that Cornwall lost 4-2.

Their third match, against top seeds and the eventual winners of the tournament, Yorkshire, proved too much for Cornwall. Whilst there were some very close matches, with Amy Polglase and Liam Sillifant losing 28-26 21-17, the team lost 6-0 overall. This meant Cornwall came third in their box, and were into the 9th-12th place play off. 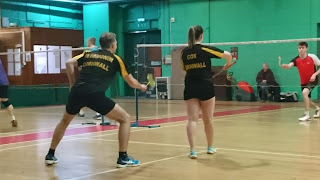 After a night celebrating Noah Semonin’s 21st birthday, the team came out fighting the next day facing tough competition against Avon in their first-round match. Tyler Sillifant won his singles comfortably, whilst Ellie Watkinson’s opponent proved too much. The Semonin brothers lost their match, whilst Amy Cox and Amy Polglase were victorious in their level doubles games. This meant that the teams were tied at 2-2, and everything came down to the mixed doubles. Amy Polglase and Liam Sillifant won comfortably in two sets, meaning that Tyler Sillifant and Amy Cox just needed to win one set to beat Avon overall. They were successful in doing so, and the Cornwall squad won on points overall against Avon.

Their next opponents were Kent, in the play off for 9th or 10th place overall. They came out strong, with both Kellen Moore and Tyler Sillifant winning in 21-17 23-21 and 22-20 21-11 respectively. The level doubles were also a success, with Milo Semonin and Liam Sillifant winning a very long and exciting match, winning 21-18, 18-21, 21-18 against a tough pair from Kent. Amy Polglase and Amy Cox found their game a little easier, winning in two sets. With this giving a 4-0 lead for Cornwall, they could not lose whilst they entered the mixed doubles stage of the match. After a long and tiring weekend, the team beat Kent 4-2, meaning that they came 9th overall, one step up from their 10th place last year.

A big thank you to Brian for driving the team up there and back at the last minute. 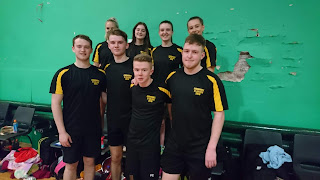 Over 40 entries were received for the U15 and U17 County Championships which took place over the weekend of 28th-29th April at Treviglas Sports Hub, Newquay. U15 CHAMPIONSHIPS The boys singles final was won by Sam Phelps ( Falmouth ). Sam played a confident, well structured, tactical match winning comfortably in two ends. The girls singles was won by Cara Collins ( Liskeard ). Cara, fresh from competing at the U17 National championships the previous weekend, dominated the event finishing with a resounding victory in her final match. The boys doubles saw Jason Ayliffe and James Wright (both Truro) deservedly win the County title. The girls doubles was a fascinating event. Cara partnered her school friend Emily Geach who is a new comer to the sport. Both worked tirelessly in their matches and won the event showing great determination and willingness to support each other during long, tense rallies. The mixed doubles winners were Cara and Regan Hull (Falmouth). Trophies were presented by Mrs Jenny Netley-Reseigh (County U14 Team Manager). U17 CHAMPIONSHIPS Sunday saw the U17 players competing against some of their younger peers in the U15 and U13 squads. The boys singles final saw the top two seeds going head to head. Harry Dyer ( First Edition BC) had a close match with Luke Sillifant ( Launceston). Luke agonisingly losing the second end 22-20, and the match in 2 ends. Harry taking his first U17 County singles title. The girls singles final was repeat of 2017. Cara defeated her county team mate Mollie Bailey ( First Edition B) in two ends. The match was of a high standard. The boys doubles final saw Luke, partnering his school friend Joe Tucker ( Launceston), defeating Harry and his partner Potae Sheppard ( First Edition BC) in 3 close ends. Without doubt the match of the day was the girls doubles final between Cara and Beckie Bailey (First Edition BC) against Mollie her elder sister and Melissa Lin (First Edition BC). It is worth noting that both Melissa and Beckie had competed in the National Schools finals in Aylesbury the previous day, returning home at 1am Sunday morning. Cara and Beckie won in three incredible ends: 13-15, 15-14, 15-13. The final match of the day was the mixed doubles. Again, high class badminton was on show. Harry and Cara defeated Luke and Melissa in three very close ends. The trophies were presented by Mr Guy Lin (Under 18 Team Manager). The standard of badminton throughout the weekend, and especially on Sunday, was exceptionally high. A high percentage of Cornwall’s youngsters compete on the National Badminton England tournament circuit. The players have achieved National tournament success and high National rankings due to their dedication and commitment to the sport throughout a long season. U15 BOYS SINGLES WINNER SAM PHELP U15 GIRLS SINGLES WINNER CARA COLLINS U15 BOYS DOUBLES WINNERS JASON AYLIFFE/JAMES WRIGHT U15 GIRLS DOUBLES WINNERS CARA COLLINS/EMILY GEACH U15 MIXED DOUBLES WINNERS CARA COLLINS/REGAN HULL U17 BOYS SINGLES WINNER HARRY DYER U17 GIRLS SINGLES WINNER CARA COLLINS U17 BOYS DOUBLES WINNERS LUKE SILLIFANT/JOE TUCKER U17 GIRLS DOUBLES WINNERS CARA COLLINS/BECKIE BAILEY U17 MIXED DOUBLES WINNERS CARA COLLINS/HARRY DYER
Posted by Cornwall Badminton at 19:56