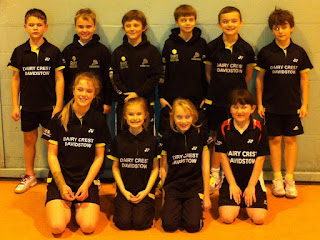 Sunday 6th January 2013 saw the Cornwall under 11 badminton team lose to the Avon under 11 team 28-8 at St Ursula’s School, Bristol, in their first fixture of the season.

Avon had the rub of the green in the singles events and despite several close games, only Sam Hammersley and Harry Dyer won their rubbers in the second and third berth respectively.

However, the level doubles provided much improved results with Cornwall’s number one pairs, William Freer and Sam Hammersley and Cara Collins and Charlotte Freer winning 2 rubbers each in thrilling matches with a high level of badminton on display. Harry Dyer was magnificent with debutant Daniel Appleyard beating their Avon number two counterparts in 3 ends with Avon having no answer to Daniel’s excellent serves and Harry’s consistency.

With the match already won by Avon following the singles and level doubles events, the team managed to win 1 mixed doubles rubber with Harry Dyer and Cara Collins skilfully outpointing their opponents. Another notable performance came from Sam Hammersley and Naomi Cavill who narrowly lost 22-20.

Whilst Cornwall lost the match, had we managed to field a full team, the match score could have been significantly closer. The debutants will have gained valuable experience in a most enjoyable day’s badminton.

Katie Phelps, the Under 13 squad member, kindly travelled with the team and played to make up 2 doubles pairs, but her games were conceded.

The player of the match was awarded to Harry Dyer for his consistency and fine performances in all three events.

Posted by Cornwall Badminton at 09:18