Cornwall Youth Badminton with the continued support of Dairy Crest Davidstow finally achieved their long awaited ambition of fielding an Under 11 County Team against South West opposition on Sunday 25th Janaury 2009 at Brixham.
The Duchy youngsters took on the seasoned players of Devon who have developed their own squad over the past 5 years.
To put this match in perspective 4 cornish players have only been playing since Sept 2008,the majority for 12 months and one player 2 years. 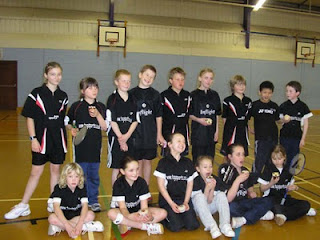 The match consisted of singles doubles and mixed with each player playing a minimum of 5 matches over the 5 hour period. All games were to 21,with extended play and 3 ends where required.

Sam lead the line at number one and played a fantastic match losing 21-18 21-15 to an established U13 player.
Anna took the pressure for the girls and although losing played with great spirit and determination. All singles games were hard fought. Notable results by Cara who lost narrowly 21-15 21-15 at number 4 and Danny who was pipped 21-19 in the second end at number 3.
The Duchy recorded two fines victories with Mawgan dominating his opponent at 6 winning 21-12 21-12 and Jessica a revelation at number 3 winning 21-9 and with great concentration 23-21 a brilliant win by both players.

In the doubles all the boys pairings achieved respectable scores with Sam and Jason going close in their second game 21-17 21-17 playing at number one.
The girls excelled with magnificent 3 enders by Anna and Cara playing at number one against the Devon number two and three pairings. The girls working well as a pair with great determination and tenacity took their opponents right to the wire in each of these two matches.Both three ends with great rallies and tactical play.
Rosa and Shauna playing at number two narrowly missed out against the Devon number 3s losing the second end 22-20.
All girls were strong on determination and support for each other.

The mixed finished with one end to 15 points. Sam and Cara were so close going down at number one 15-14-what game... Danny and Anna , Alex and Rosa and Mawgan and Ellie all finished on double figures in their mixed matches.

All players performed magnificently and wore their county shirts with pride supporting their team mates continually throughout the match.
Final result 48-2 to Devon but more importantly our players were a great credit to themselves and played with a high degree of sportsmanship and never gave less than 100 % effort.
It is planned that CYB will now enter the South West Counties Under 11 league in 2009/10 season when a formalised under 11 squad has been agreed.

A Final Thanks to Mr Martin Higgs Headteacher at Pensans Primary school,Mr Ben Isley Headteacher and Andrew Thompson at Mabe Primary,Tom and Phil Lyle who coach at Launceston College, and Ros Bastain Assistant Headteacher at Penryn College.
Without these peoples support and commitment over the last 12 months where close links have been made with primary schools and colleges,none of our children would not have had the coaching and mentoring required to represent the County.
A strong base has now been achieved from which it is intended that 25/1/9 is only the beginning of a bright future for all players at this age group from across the county.