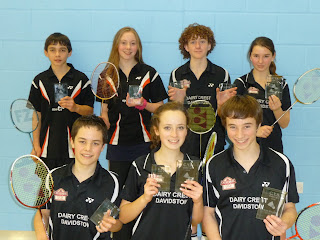 The U15 County Championships were held at the fantastic new badminton venue, Penryn College on Saturday 10th January. There were 39 entrants with a good number of girls, 17 in all. This all made for an excellent days badminton with outstanding performances from many of the players from across the county.

Boys Singles
The experienced Ben Cooper (Penryn College) took on new boy Kris Jasper (Launceston). In an exciting final where Ben threw everything he had at the talented and composed Kris it was the experience and determination that came through with Ben winning 21-17, 21-16.

Girls Singles
The much improved Bethany Wotton (Leedstown) competed with Imogen Powell (Helston), recently returned from injury. It was a close contest with Imogen coming from behind to win 21-17, 21-19.

Boys doubles
After coming through some tough matches in their boxes the finalists were Ben Cooper & Sam Spencer (Penryn College) and Lee Chapple (Mounts Bay) & Tony Marshall (Bude). In one of the best matches of the day, which went to three ends, there was some excellent doubles play. Ben & Sam won the first end 21-18, then Lee & Tony came back strongly to take the second 21-6. The third end changed lead several times then after saving match point Lee & Tony went on to win 23-21.

Mixed Doubles
The final event of the day also went to three ends. Lee Chapple & Bethany Wotton took on Ben Cooper & Imogen Powell in the final. In a close first end Lee & Bethany took it 23-21, Ben & Imogen fought bach and won the second 21-18. In the third the experience of the counties top U15 mixed pair, Lee & Beth, came through and won the third 21-10.

The strength and depth across the U15 age group is evident in the eleven different finalists and seven different winners. Well done to all the players who entered and thanks must go to Tony Poole who was referee for the day. Also to all those who helped in the running of the tournament, Phil & Maria Chapple, Kath & Jon Wotton, Sue Cooper, Tracey Grout and all the parents who came to support.
Posted by Cornwall Badminton at 09:58