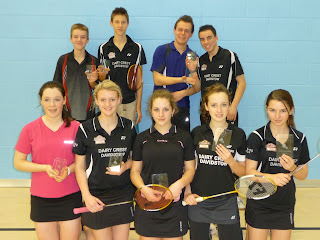 Cornwall U17s travelled from across the county to the fantastic new sports hall at Penryn College on Sunday 11th January to compete in the 2009 Dairy Crest County Championships.
There was a strong field from across both U17 and U15 age groups,with the U15 players putting considerable pressure on their elder peers throughout the day.
A field of some 40 players reflected the growing strength of numbers and quality which is now widespread across Cornwall.

Boys Singles Ross Lashbrook v Patrick Davis both Launceston College.
Winner Ross 24-22 21-10.
A fantastic final with Patrick dominating the opening stages taking an early 9-3 lead.Ross held on and a nail biting ending with great rallies resulted in Ross taking the first end. Patrick was unable to dominate in the second and Ross powered to victory.The match was played in a great spirit with both players close friends and long term doubles partners.

Boys Doubles Ross-Patrick v James Payne Callington School and Trevelyan Greenhall Helston College.
Winners Ross-Patrick 21-10 21-8.
Ross and Patrick took the game to their opponents and were ruthless in their attack taking every opportunity to put James and TJ under pressure. Quality serving and a sheer determination to dictate the rallies resulted in a strong performance.James is the shinning light of the new group of players who entered the U17s this season and will no doubt be back in the finals next year.TJ should take pride fronm achieving a finals place having worked tirelessly since his arrival on the county scene 12 months ago.

Girls Doubles.
Round Robin.
Winners Bethany Wotton Hayle School,Imogen Powell Truro School 63 points
Runners Up Bronwen Wotton and Lorna Garbett Callington College 61 points.
A major upset with possibly a changing of the guard as Beth and Imogen continue to progress.In the deciding game the youngsters (both U15s) clawed their way back into contention and with great attacking play and defence defeated the favourites.

Mixed Doubles.
Ross and Bronwen v Tony Marshall ( Bude) and Jo Philp
Winners Ros and Bronwen 21-10 21-9.
A ruthless display of clinical mixed doubles tactics by the seasoned number one pair in the U17s.Ross targetting the younger player and Jo who were both unable to match the oppositions experience and expertise in this discipline.

Sincere thanks to Ros Bastian Director of Sport at Penryn College for a fantastic venue and making all players and spectators welcome.

At the conculsion of the Championships Dairy Crest Davidstow announced on monday their continued sponsorship of Cornwall Youth Badminton with a futher generous donation of £250 to support the U17 Harrod Inter Counties Tournament Team ,as they compete against the very best players from across the country at Nottingham University in early April. All players for the third year will wear sponsored shirts proudly promoting both Dairy Crest Davidstow and Cornwall Youth Badminton on the National Stage.

jon.w.
Posted by Cornwall Badminton at 10:33