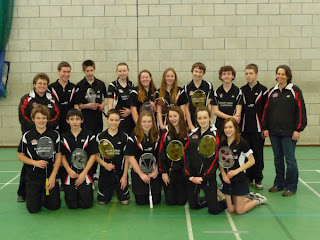 This was the first home match of the season and we welcomed Wiltshire’s U15 team to Tregorrick Park, St Austell. The Cornish team were very upbeat after some excellent performances at the County Championships two weeks previously. This positive mood showed as the boys won the singles 5 – 1, with an excellent debut singles for Chris Grout winning in three close ends. The girls also played well winning 4 – 2. Bethany Rich recovered well after a nervous start to win in two ends on her first time in the team.

In the doubles Cornwall again were dominant. The boys number 1 pair, Lee and Tony, took all 3 games. The Cornish second pair (Ben & Sam) and the third pair (Chris Grout & Kynan) took two games apiece, losing only to the Wiltshire first pair in very close games. The girls, however, exceeded all expectations and won all 9 games. Our third pair Abigail and Hannah, a scratch partnership, beat the Wiltshire first pair in two ends. Charlotte & Emma had to come through two difficult 3 end games.

By the mixed Cornwall had already won the match and they were all able to relax and play with great confidence. Cornwall were dominant again and won 5 – 1. Lee & Beth Wotton playing at number one played exceptionally well and took their 2 ends very comfortably. To finish the match off was a great 3 end game. Wiltshire took the first end 20-22, then Cornwall (Sam & Emma) fought back in style and showing that new found confidence and belief to take the next 2 ends 21-8, 21-8.

The whole team played with great spirit and, as the match developed, with belief. They are reaping the rewards of all their hard work and training over the last few months with James Elkin. Team managers Kath Wotton and Sue Cooper are very proud of all the players and we are looking forward to the next match against Devon on 8th February at Penryn College.

Many thanks to all the parents for their help and support on the day.
Posted by Cornwall Badminton at 11:37