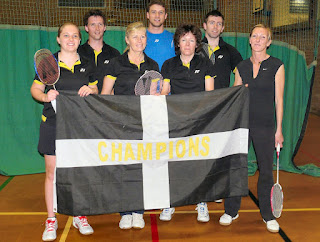 For the season’s finale, the new Division 3 champions, Cornwall, took on the visiting Guernsey 1st team at Polkyth Leisure Centre. The Cornish team were missing 3 regular players due to other commitments, so were expecting a tough fight for their last match this year.

The home men singles players, James Whetter and Shane Maton, started the game off in fine style, with 2 excellent victories against their island opponents. Rose Willis, playing in the number 1 ladies slot for the first time, did well to take this game to 3 ends and just lost out, although Emily James helped the team to a strong 3-1 lead by winning her singles impressively.

The mens doubles was a Cornish black and gold whitewash, with James in stunning form alongside his partner Guy Michell, and the newer pairing of Shane and Tom Lyle looking good in winning all their games.

Guernsey had brought a strong ladies team, and their first pair proved too good for both Rose and Jan Santillo who had stepped in for Cornwall at the last minute, as well as Emily and Vicki Thomas. Rose and Jan used all their experience and turned the second ladies round in their Cornwall’s favour, winning the match with an exceptional result, while Emily and Vicki played well in their second match, being very unlucky to just lose a tight 3 ender.

Cornwall needed to win at least 2 of the 3 mixed doubles to gain their 3rd maximum point victory in a row, and the watching crowd had plenty to cheer about as Tom and Vicki secured the first win in just 2 ends of attacking, solid play. Guy and Jan were up against an experienced Guernsey pair in the number 2 slot, and narrowly lost in 2 ends, leaving James and Rose as top pair to bring home the victory. This they duly did, but only after a nervous games split to take the final game to the wire, when James and Rose turned on the style in the third, and completed a fine performance to bring the final score to 10 games to 5.

This fantastic win, means Cornwall have won the Division by 4 clear points over Berkshire, and takes them up to Division 2 next season, as high as any Cornish team have been in over 30 years – a truly memorable achievement for this young team.


John Tresidder, the Cornwall Badminton Press Officer, who was a delighted spectator at the match, enjoyed it thoroughly and commented: “The Cornwall Team, overall, gave their All and were magnificent, with James Whetter, in particular, with his 4/4 victories, seen to be in supreme form throughout the proceedings.
“James now has more fitness, consistency and touch, allied to his old power game, at his disposal and will relish the challenge of the taking on the likes of Devon I, in the new ICC Regional 2 campaign, starting in the Autumn.”
Team players – James Whetter, Shane Maton, Guy Michell, Tom Lyle, Rose Willis, Emily James, Vicki Thomas, Jan Santillo.
Missing this match – Ross Lashbrook, Jo Philp and Bronwen Wotton.