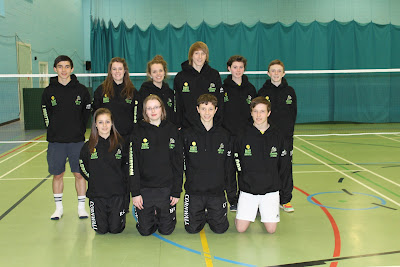 The 2012 Cornwall Inter Counties Team travelled to Nottingham University on Wednesday 11th April to compete for the 6th consecutive year in the Prestigious National Under 17 4 day Team Event. The Team were intending to build on last seasons best ever 34th place.

The ICT places great demands on the 40 Team of 5 boys and 5 girls over a gruelling 10 match format. The Players from across England and Northern Ireland are of top International and National standard,including the current European U17 Boys singles champion.

Cornwall started the Tournament after a 12 month programme of out of county tournament commitments with a grade 3 seeding in their first round group. A hard but close fought match v Leiscestershire resulted in a 7-3 win to their opponents. Performances were promising with the Team Captain Kris Jasper and Hester Luke both taking impressive wins at no1 singles.

The second match v Cheshire was always going to need some tactical changes and although losing 10-0,performances by both Chris Cooper and Jake Brazewell in their singles against top opposition were impressive. This was all building to a climatic match v Durham in the evening to see which team moved into a higher group on the second day.

The match commenced at 7pm. The atmosphere was loud and intense with vocal support from parents who had travelled from both counties being present in the University 12 court hall. A nail biting no1 boys doubles win by Kris and Simon Cox meant that after 2 hours 15 minutes on court it came down to Georgia Higgs and Hester Luke at no2 Girls Doubles to win in 2 ends and take the Duchy through to a potentially great second day. A fantastic calm display by both girls under intense attacking pressure from their opponents won the day. Cornwall drawing 5-5 but winning by 4 ends on a countback score.

The second day meant a 9am match. Cornwall was on court at 8.30am in preparation and stormed through a Northumberland team right from the start. A strong team performance meant a 7-3 victory to the Duchy and the start of a consistent move up through the Tournament positions.

Match 2 against Staffordshire was a potential pitfall with top ranked boys and girls within their ranks. Cornwall responded with what is arguably their best ever performance and certainly their best match result ever at the ICT. 9-1 to Cornwall,some simply outstanding performances,Hannah Robertson and Kris Jasper storming through their opponents at no1 mixed,with purposeful attacking shot selection. Chris Cooper and Sam Payne taking an inspirational game of mens doubles at no2,both girls pairings of Abi Logg and Hannah,Georgia and Hester winning in 2 ends. The match of the contest saw Kris take on a top quality Silver boy. What a spectacle, Kris winning in 3 ends.

Match 3 left the Duchy contemplating a top 30 finish on day 4. Guernsey stood in the way but Cornwall were not to be denied with a professional 7-3 victory. After a slight early match wobble the girls took control in their games to increase the scoreboard.

Day 3 saw a pivotal match against Worcestershire to decide who reached the 21-25 group stage. Cornwall fought for everything, our no1 girls doubles being outstanding taking a fantastic match in the 3rd end 15-12,Kris took on a Gold standard top 5 U15 boy. Another enthralling match saw another Duchy win.

However a narrow loss in the mens doubles matches meant an eventual 6-4 loss, meaning a deciding group of 25-28.

The players regrouped and took on Oxfordshire. The game of the match was undoubtably Jake Brazewell at no2 boys singles. Games go to 15 points at the ICT, thereafter it is extended play to a sudden death single point win at 20 all. After a titanic battle of nearly 30 minutes on court Jake stood at 19-19. He calmed himself and took the first end 21-19 !!!

Jake retained his concentration to win in two ends. However the Duchy ended with a 6-4 defeat. The final match of a hard day found local South West rivals Gloucester on the court. This was going to come down to success or not in the mixed doubles with some highly rated girls in the Gloucester team. Kris and Hannah won in 3,Rachael Collard and Chris won a comfortable first end. The opposition fought back and it resulted in a 3rd end. With the score 14-10 match point to their opponents Chris and Rachael found a resilience to pull back to 14-14. The game went head to head to 20-20,the last point going to Gloucester 21-20 !! What a game !

Undeterred the team left the hall in high spirits with a final match on day 4 against Cumbria to contemplate.

Some tired players walked out on both sides at 12 noon on the last day. A steady start saw a even match developing. Kris again simply breathtaking in defeating a U17 Gold Singles player. Jake showing incredible fortitude to go 3 ends at no2 singles losing 17-15 in the third,another monumental effort by Jake. The match started to drift away from the Duchy but Georgia and Hester remained resilient taking another great victory in two ends in their doubles. Final score 8-2 to Cumbria. A great match to finish with great sportsmanship being shown on both sides of the court throughout the match.

A final position of 28 from 40 Teams surpasses last years best ever finish of 34 and puts the County in the top 30 team bracket at the National level for the first time in their history. An incredible feat by the team competing at such a high level against top Nationally ranked players.

This left a courtside Team photo opportunity to be completed and a return to the University to watch the final match Yorkshire v Ulster for the 2012 Trophy.

Yorkshire eventually winning the ICT for the 17th year out of 46 years of Tournaments.

The team returned home late on the Sunday evening with our final players arriving in Penzance some 350 miles from the competition well after midnight.

A sincere thank you to our main sponsors DAIRY CREST DAVIDSTOW. TAG SPORTS and Exhibit 1 print and Embroidery for such professional kit.

Posted by Cornwall Badminton at 14:11