Completing a fine weekend for Cornish Badminton and following on from the 1st team’s epic victory over Guernsey, the 40s team had their own stunning win the next day, beating the visitors from Avon 9 – 3.

Strengthened by some new blood in the shape of Nick Phelps who partnered Bob Bell to power their way to 2 mens doubles success, the 40s looked too strong for Avon from the start.

In the other mens, Pete Bazin and Adam Widdison were very unlucky to lose a tight 3 ender to the second Avon mens, before losing to the first pair, despite some valiant defending.

The Cornwall women were in fine form to notch up all 4 of the ladies doubles, 3 going to 3 ends and with some nail-biting rallies. Jan Santillo and Lynda Beer continued their usual winning ways in both their games, and Rachel Irish and Lorna Riggs battled their way through 2 close games to emerge victorious.

Cornwall needed just 1 more game in the mixed doubles to secure the match, and in the end, they won 3 out of the 4 to make it a comfortable, excellent result. Bob and Lynda were narrowly beaten in the top slot, but Nick and Rachel, Pete and Lorna, plus Adam and Jan all won their 3 enders. 7 of the 12 games in the match had gone the distance, with Cornwall winning 6 of them – showing the home team’s strength, fitness and determination to win for one and all.

The season now closes with Cornwall 40s sitting mid table, an good improvement on previous years and giving positive signs for the next season to come. 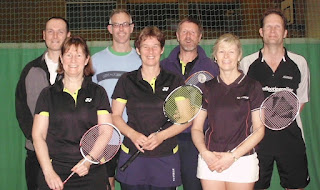