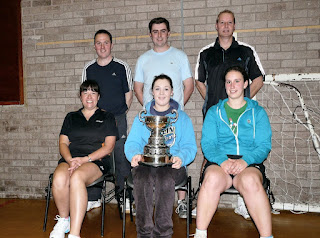 Carlton Cup was won by CYB B team on handicap before adjusting the handicap’s Liskeard scored 329 – 326 but after adjusting for the handicap this turned into a 37 point win for CYB B 426 – 389 - full report to follow.

Some exciting badminton was played and it was good to see both competitions being played on the same night, the first time for a long time. Nice to see so many spectators including the President and his wife, Pauline and Mike Avery and their granddaughter who plays for the CYB U11’s.
Posted by Cornwall Badminton at 08:11