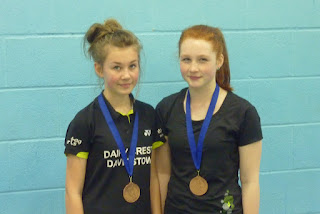 L/R: Jubilant - Amy Polglase (Cornwall) and Ellen Jennings, from Hertfordshire, pictured after being awarded Bronze Medals for becoming semi-finalists in the Girls’ Under-13 Doubles at the England National Badminton Championships, held at the University of Nottingham on March 17/18.

At the Science College, early on, she attended a Badminton Taster session course, organised by Mr. Tony Wong, coach and her love of the sport spiralled after that, with her proceeding to play representative badminton for the Academy.

Amy is a member of the First Edition Junior Club, based in the Sports Hall at Cornwall College, Pool, near Redruth, who meet on Saturday mornings and are sponsored by The Redruth Charity Trust.

The 2011/2012 campaign has seen her harvesting numerous titles, including the Cornwall Under-13 girls’ singles, level doubles and mixed doubles, securing a superb hat-trick, in the process, as well as the Under-15 girls’ doubles and mixed doubles titles. Amy has also played in the County Under-17 championships and has beaten some of the squad members, in tournaments.

And, after her exploits and good tournament results, at SILVER level, IN and OUT of the Duchy, in the 2011-2012 season, she graduated to become a BADMINTON England GOLD standard player, the first youngster to be bestowed with this honour, in Cornish Badminton history.

Amy also turns out for The CYB Under-15 team, sponsored by Dairy Crest Davidstow, where, in the Girls’ Doubles, she has partnered Kellen Moore, another Camborne Badminton star, in the number one slot.

And, with the affable young ladies’ phenomenal progress on court, the general consensus is, that both Amy and Kellen, will be challenging for a county senior second team berth and then the Cornwall 1st Team - the “Chiefs” - in the not too distant future.

Miss Polglase recently experienced a most exciting and fruitful weekend, at the University of Nottingham, on March 17/18.

Amy, partnering Ellen Jennings, from Hertfordshire, proceeded to reach the semi-finals of the National Under-13 Girls’ Doubles Event, where the duo were presented with prestigious Bronze Medals for their truly sterling efforts.

Amy, well done, indeed, from the Cornwall Youth Badminton Organisation and Dairy Crest Davidstow. What a wonderful early Easter Present and best wishes for next season.

Finally, Amy was formerly a member of the Swallows of Helston Gym Club, for five years and her trademark - sublime poise and balance, allied to springy, on-the-toes footwork, on her beloved badminton court, owes a great deal to these formative years of gymnastic training.
Posted by Cornwall Badminton at 10:41