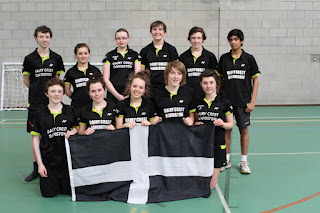 Cornwall U17s Badminton Team completed a busy schedule of badminton over the weekend with a resounding 25-11 victory over Wiltshire in the South West Counties Badminton League on Sunday at Tregorrick Park St Austell.

This second victory in 4 weeks moves the team further up the league table with high hopes of a top 3 finish with Gloucester travelling to the Duchy on Sunday the 25th to complete the teams league fixtures.

The match started with a confident victory for Jake Brazewell playing at no1 for the first time at this level winning comfortably in two ends. Simon Cox had a long battle at no2 going down in the third 21-15. Vinodh Arumugam just back from illness was tenacious in his match but felt the pace as he works to regain full fitness. Chris Cooper, Ben Johnson and Sam Payne all won well in their matches.

The girls with Hester Luke taking the no1 spot for the first time took all 6 matches. Abi Logg at no2 unfortunately sustained an injury in her second end, however Abi showed great courage in competing her singles match and recording a victory. Thereafter a visit to hospital was required to work on her injury a great captains performance. Hannah Robertson competing at no5 won a close first end 22-20 before taking the second 21-15. Again another resilient performance by our Vice Captain.

In the doubles the girls pairings of Hester and Georgia Higgs took all 3 games, who after a slow start against the no1 pairing , gelled and were very impressive as the afternoon went on. Rachael Collard and Alice Sporik took 2 games from 3 again improving as the games progressed.

The boys doubles saw an outstanding performance by a new pairing of Ben and Sam playing at no3 they won 3 games all in 2 straight ends. Some very attacking badminton, was simply too much for their opponents in each game. Both players demonstrated an exemplary high work rate, working tirelessly for each other as they dominated with persistent attacking play. Chris and Simon and Vinodh and Jake took two games each.
In the mixed Simon and Rachael took the no1 spot and lost the first end 22-20,before going down 21-15 in the second. Chris and Hannah and Jake and Georgia were comfortable winners at nos 3 and 4.

Sam and Hester won well at no5 but due to Abis injury and a need to alter the pairings this win did not count to the teams overall total. However it maintains both Sam and Hesters 100% record in mixed doubles over the season.
County Colours were awarded to Ben Johnson on completing his third County match of the season.

The Team was without their no1 player and Captain Kris Jasper who was competing in the U17 National finals over the weekend. The Players against Wiltshire all demonstrated the developing strength in depth that the County is creating and achieved success in what was anticipated to be a close run match.
The match was played in a great spirit with all games extremely competitive but played hard but fair. Great sportsmanship was shown by both sides throughout the afternoon.