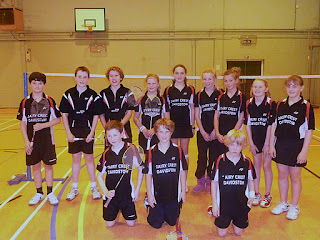 The jubilant Cornwall Youth Badminton Under-13 Team, sponsored by Dairy Crest Davidstow, after defeating Avon County, by 35 rubbers to 1.

Cornwalls Under 13 Badminton team made the long journey to Avon on Sunday 13th November for their first match of the season.

The team of 6 boys and 6 girls made a fantastic start taking all but one of the singles games, Avon put up a fight but the determination of the Cornish youngsters paid off and they went on to win the remainder of all the doubles and mixed doubles games to take a 35-1 victory.

Avon were unable to field a full team of girls so they played 3 players from the girls under 15’s. Beth Sarah and Polly played these singles matches and won them a fantastic achievement. Beth went to 3 ends in her match and showed true determination and focus to emerge victorious after taking the final end 21-18.

Danny Alford and Tim Wyatt both in their debuts for Cornwall Successfully won all of their doubles matches again in 2 ends.

Going into the mixed doubles Cornwall had already won the match but that didn’t stop the Cornish youngsters going out and taking all the mixed matches in two ends,

A Fantastic victory for the Cornish team and a great start to the season.