BADMINTON BACK IN FOCUS FOR CORNWALL’S COURTS 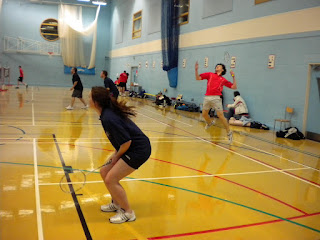 A BADMINTON England Initiative, underway and a local rallying call, of support, from Emma Austin, the Regional Badminton Officer for Cornwall & West Devon:

A QUESTION … What do 4.4 million adults across England meet up to do each year to keep fit, healthy, active all while putting a smile on their face, writes Emma Austin.

The Olympic sport of badminton of course!

For some, playing badminton may still conjure up nostalgic thoughts of playing at school in a cold sports hall or played with the family in the back garden, using the washing line as a make shift net.

Badminton may well be still considered that low cost, traditional garden sport that anyone can swing a racket for enjoyment in, but it is a little known fact that more people in England now play badminton than cricket, hockey, rugby union and rugby league put together!

Move up the competitive ladder and it’s also the fastest racket sport on the planet with the shuttlecock flying around at over 420 km – that’s faster than an F1 car!

It is little wonder that, each week, well over 1/2-million adults head onto the 23,000 plus badminton courts across England - be they in leisure centres, sports venues, schools or community halls - to put their racket skills on show.

With such an impressive stat, it is easy to see why badminton is the 6th most popular and frequently played sport in the country - and is no surprise that there is an active badminton club scene in every county.

Within Cornwall alone, there are a host of fantastic badminton clubs, thriving at both senior and junior levels, which open their doors wide to welcome new players of any age or on court ability.

Yet the numbers of people playing in clubs both for fun and competition across the county do not stack up to the national statistics. For every one club in Cornwall there are five in Devon and it’s starting to have an impact on how the county competes at a local level.

Despite, a hugely sociable affiliated club network and an army of local volunteers offering coaching opportunities, there are fewer players taking part in regular, organised badminton in Cornwall www.cornwallbadminton.co.uk and some clubs are even finding it hard to fulfil local East and West Cornwall League commitments, with female club members a particular issue of concern.

For badminton to grow across the county, attracting new adults onto Cornwall’s low cost courts in organised badminton activity is a priority – and BADMINTON England, the sport’s governing body www.badmintonengland.co.uk are committed to heading up the charge, led locally by Emma Austin, the county’s regional officer.

Speaking of her priorities in supporting Cornwall Badminton,
back on the badminton map, Ms. Austin, who also looks after activity in West Devon, said: “Securing a successful future within Cornwall needs the competitive badminton infrastructure to be supported, for all ability levels.”

Recreational players, who enjoy regular, social badminton with friends or work colleagues are the ideal candidates to join into local clubs and put their talents to the test in some team league badminton. The all new web portal at www.playbadminton.co.uk would be the perfect place to start.

Alternatively, current social groups with a regular player base, could affiliate as a club and enter the East and West Cornwall Leagues.

And for those not quite ready to step up and play competitively where points make prizes at the end of each season, there are now a host of extremely sociable court time initiatives springing up across Cornwall to get adults onto court.

Look out for No Strings Badminton, a national programme with over 260 venues and five major leisure chains involved, offering low cost pay and play sessions at times that actually suit busy lifestyles.

“With No Strings Badminton we’re taking away a lot of usual barriers when it comes to getting back involved in sport. There’s a guaranteed playing partner at every session in Cornwall so you are always assured of a game and you can just turn up, there’s no need to book,” continued Ms. Austin.

She then added: “With five leisure centres – in Helston, Newquay, Truro, Polkyth and Falmouth – all now courting No Strings Badminton sessions at various times and plenty of other sessions due to be announced in the New Year, the BADMINTON England Initiative, launched in February, 2011, is certainly taking off in Cornwall County.”

Details can be found by visiting the official website : www.nostringsbadminton.co.uk

Badminton is a fantastic sport for all – at whatever level, it is a game for life. So, why not give it a go in 2012 and see what all the fuss is about!

“I have taken part in a number of sports and was a county schools’ sprinter, but badminton, one of the World’s most popular participant sports, is the one that I love the most.

“We are an exhilarating sport, where athleticism, poise and balance is allied closely to fine touch and power. In addition, in a rubber of singles badminton, which goes to a deciding third game, a player travels farther, in a match, than in any other sport, apart from ice-hockey.

“I feel our great sport, comprising a game of aerial rallies, in effect - unlike tennis, table tennis and squash, all good sports, as well, who have the luxury of a bounce - has the potential to be very popular at club and league level.

“Indeed, I discovered, fairly early on, that a badminton club affords great camaraderie and where one can bid for selection to a representative team in the league, with organised pathways in to Cornwall Youth Badminton (CYB), as well as senior county and international level badminton. Inter-Club “Friendlies”, are also a consideration for those not so ambitious, when starting out.

Emma Austin and John Tresidder.
Posted by Cornwall Badminton at 09:16