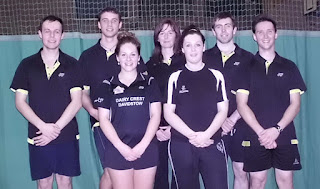 Cornwall’s top badminton team maintained their winning ways, with an excellent home victory over the visiting Somerset team at Polkyth last Sunday (4th December), 11-4, gaining maximum points and moving them to second in the league behind the powerful Berkshire side, who they play next on 18th December.

All four Cornish singles players won, giving a fantastic 4-0 start to the match, 3 of the games going to the wire, with Shane Maton, Jo Philp and Bronwen Wotton being victorious in three close ends, and James Whetter taking his game comfortably in two.

James teamed up once again with Guy Michell to power their way through both mens doubles, equalled by the newer pairing of Shane and Ross Lashbrook Both pairs looked impressively invincible and the Somerset boys had no answer to the attacking badminton on display.

Cornwall’s ladies doubles players were up against some experienced Somerset girls, who proved too strong for Jo and Rachel Irish, although Bron and Vicki Thomas faired better by just taking an exciting 3 ender against the second Somerset pair, saving match points along the way to the delight of the partisan crowd. Bron and Vicki were unlucky not to push the first pair all the way in their other game.

The match score stood at 9-3 going into the mixed doubles – Cornwall having won the match but needing one more game to secure maximum points. All three games went to three ends to keep the watchers on edge, but James and Jo, and Guy and Rachel won through, and Ross and Bron were very unlucky to miss out on winning a fine close game.

Congratulations to Shane, James and Guy on their 100% performance, and well done to the whole team for a thrilling result. All spectators are welcome to the final game before Christmas, a potential top of the table clash with Berkshire at Polkyth on 18th December at 1pm.
Posted by Cornwall Badminton at 22:47