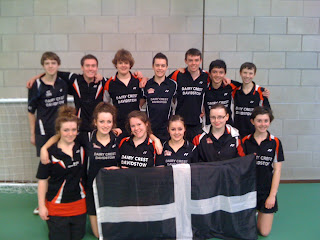 In the singles the boys took 5 out of the 6 matches with a classy performance by Chris Grout at no2 . James making his county debut at no6 won well in two hard fought ends 21-18.21-18. Just rewards for a consistent approach at training over two years. His determination under pressure being the deciding factor.

In the girls singles great wins for Hester playing at 3 in two straight ends ,Beth Wotton in two ends and Hannah winning a gruelling 3 ender at no6. This left the team with an 8-4 advantage going into the doubles.

The boys continued their great season at this discipline taking 6 out of 9 games. Christian and Chris Cooper further cementing their partnership at no3 by taking two games with a great win against the Somerset no2 pair.

The girls took all 3 against the Somerset 3rd pair. Beth and Beth making a critical contribution to keep the team on track with a fine win in two ends against the Somerset second pair, being more focussed and retaining the attack on a consistent basis. Our 3rd pairing of Rachael and Hester had a magnificent performance in taking the Somerset No1s to 3 close ends. Great tactical awareness by our girls.

A scoreline of 18-12 in the Duchys favour going into the mixed. This is where the strength in depth of the team lies. New pairings throughout the mixed returned 5 wins from 6. The most nerve racking performance goes to Beth Rich and Kynan at no3,who in 3 ends 19-21.23-21 and 28-26 showed all those present just how much pride there is within the team. A wonderful game to finish a great match for Cornwall.

This victory moves the team into a position to travel to Wiltshire next Sunday in good heart, with the aim of a 3rd place in the League still very much achievable.
A big thank you to all the Grandparents,Parents and Brothers and Sisters of our players who supported the match. Kynan having the full complement of 3 generations of his family in attendance to give support.

Thank you on behalf of Cornwall Youth Badminton to all the staff at Tregorrick Park for their welcome and support over a long season, this being the counties last competitive match at the venue for this season. Always a warm welcome and great facilities.