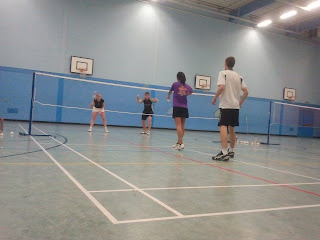 Tom and Jan fight for the crucial last game

Cornwall 1st team travelled away to Avon on Sunday to play their penultimate fixture of the season. Currently top of the table, but with West Glamorgan close behind and with games in hand, Cornwall needed a minimum of a 10-5 victory to take the title chase to the last match. James Whetter set the team rolling with a quick and clinical 21-7, 21-10 defeat of the Avon no.1, whilst Ross Lashbrook was unlucky to lose 21-18 in the third end of a closely fought battle. Jo Philp and Emily James took both the ladies singles to give us a 3-1 lead after the singles rubbers.

With solid, attacking badminton, Emily and Jo comfortably disposed of both Avon pairs. Bronwen Wotton and Janet Santillo displayed an impressive performance to defeat their equivalent pairing in three hard fought ends, and were unfortunate to miss out against the first pair in the third end. The Avon men’s first pair proved to strong for both James and Guy Michell, and Tom Lyle and Ross. However, both Cornish pairs had comfortable wins over the second pairs which meant we were still in the running for our much needed 10-5 win.

Tensions were running high as we went into the mixed doubles, needing to take at least 2 of the 3 rubbers to keep the title dream alive. James and Jo lost out in a tense three-ender to Avon’s first pair, and the pressure was on the remaining Cornish pairs to prevail.

Guy and Bron played controlled yet dynamic mixed doubles, dominating the increasingly frustrated Avon pairing in the third end and claiming victory. With a 9-4 lead it was paramount that Tom and Jan won the last match. All eyes were on the show court as yet again the match was taken to the wire in a tantalising third end. A combination of tactical prowess from Tom, sharp net play from Jan and extraordinary support from the on looking crowd gave Cornwall the edge and we took the final end 21/19. Captain Kelvin Edwards, who was unfortunately unable to play due to illness, was delighted with the 10-5 win; “This reflects some stunning individual results and a gutsy team performance- what a brilliant result”

Cornwall 1st team will need to put in the performance of the season this Sunday 27th to beat West Glamorgan at Polkyth Leisure Centre, and gain a chance of promotion. Home support is very much needed! Match starts at 12 noon.
Posted by Cornwall Badminton at 16:12