The Cornwall u13 team played their last South West County league match; doing themselves proud by beating Somerset by a very convincing 33 - 3 games. Since Somerset were unable to field a full team of girls, Cornwall travelled up with a full side of boys, but just 3 girls and started the fixture with 11 games in hand. Despite knowing this, the Cornish team went onto court expecting to have to work hard to win games, but soon proved they were the superior players in all but a couple of games. It would be unfair to single out any player, as all gave of their best from beginning to end. The match was a short but enjoyable event, during which Cornwall proved the overwhelmingly better team; both in spirit and strength. The team, accompanied by supportive parents and coach, Cathryn Bick, deserve every congratulations for completing the season in true style! The team: Boys - Alex Julian (Captain), Sam Laity, Isaac Barrow, Nick Peters, Tyler Sillifant and Milo Semonin; Girls - Kellen Moore (Captain), Amy Polglase, Billie Wood (and Cara Thompson, Rosa Higgs and Laura Galley, who were selected for the match, but who disappointingly, had no opposition to face.)

Having remained unbeaten through the season, the Cornwall U13 team is now awaiting confirmation that they are the South West County League Champions - an honour brought home for the first time in the history of the league! 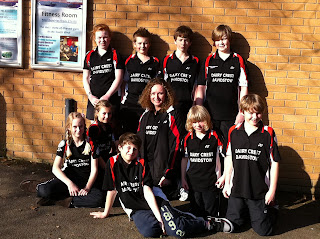