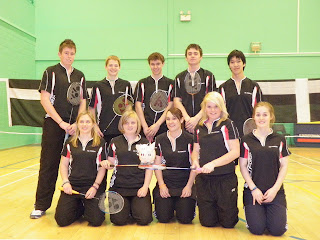 Cornwall hosted the first triangular under 21 Badminton Tournament between Avon, Devon and the host County last Sunday 15th March. It was a marvellous event where 30 young men and women fought 3 hard and competitive games.

The first match between Devon and Cornwall saw some very tight play with several rubbers going to three ends. Both the Cornish Girls Emily James and Clare Whitmore pulled out all the stops, showing why they are up and coming strong senior County Players winning both their rubbers Devon eventually pulled away winning the close fought battle 8 rubbers to 2. Then Cornwall had a well earned rest, whilst Devon took on the might of Avon, with again Devon eventually grinding out a well deserved tournament win again 8 rubbers to 2. This left Avon and Cornwall to play for pride but eventual Avon over powered Cornwall 7 rubbers to 3.

Players came back to represent their Counties from as far afield as Oxford and Bristol. It was a day of top quality badminton hosted at Launceston College and was excellent preparation for the National Finals being played in mid April, where once again these counties will battle against each other, proving the South West has some of the best up and coming badminton players around.


Under 21's Managers
Posted by Cornwall Badminton at 10:28