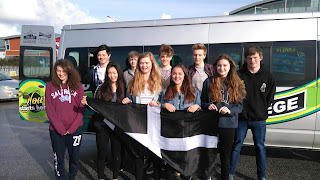 Our 2016 Team travelled to Nottingham University on Wednesday 30th March for our 10th  ICT since 2007, this being the 51st year of the competition.

A very young team by ICT standards with three U15 players. Only two of the squad of ten having competed in 2015. A building year having achieved our "best ever" result of 16 in 2015 starting from 39th place in 2010.

What a roller coaster !

So so many amazing matches,so much experience gained,such a wonderful team spirit and two very able captains in Lewis and Sarah.
Highlights were that every member of the team won at least one match,fantastic for each player.

Sarah and Elliot having two match points v the England no1 Mixed Players ! In our very first match v Buckinghamshire the current champions and eventual winners .

Harry winning his first match ever at an ICT at 13 years of age on day one v Lincolnshire in an epic 3 ender 18-16 in the third, against a 17 year old!

Mark winning 2 unforgettable singles in 3 ends,the second against Bedfordshire from 14-11 down in the third 16-14,his opponent 150 places above him in the National rankings !

Melissa winning so so many matches at no2 singles doubles and mixed and still only 13 !

Charlotte winning at doubles with Ellie as our 2016 U15 County doubles champions!

Ellie going out at no1 singles time after time and working so hard,winning doubles matches with Charlotte and Sarah.

Amelia so strong at no1 mixed some fantastic wins,so confident at no1 and 2 doubles and 2 great no.1 singles wins !

Nathan a great partnership with Mark at no1 doubles and several great wins !

Elliot great wins at no2/1 mixed and no2 doubles! Mixed with Sarah only losing 2 matches in their mixed.

Sarah winning at no2 mixed and No1 doubles.

Lewis winning at no1/2 mixed and no2 doubles. Elliot and Lewis only lost 2 matches playing doubles together.

The team won their target game v Lincolnshire 6-4 on the first day.

Eleven matches in total our most ever.. WON 4 v Lincolnshire, Bedfordshire, Isle of Man (10-0), Cumbria, DREW 1 v Nottinghamshire lost on count back by one end. LOST 5. 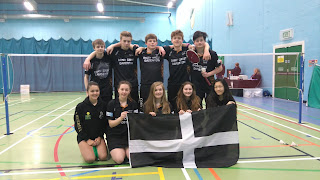 Sincere thanks to all the parents that travelled to support..Guy and Patricia LIN,Ian and Deborah GRIGG and David,Kim and Jack DYER,fabulous support in every match.

Posted by Cornwall Badminton at 20:48