A group of 5 players from Truro and Penwith College represented South West Colleges at the National Association of Colleges British Championships over 3 days starting on Friday 15th April. 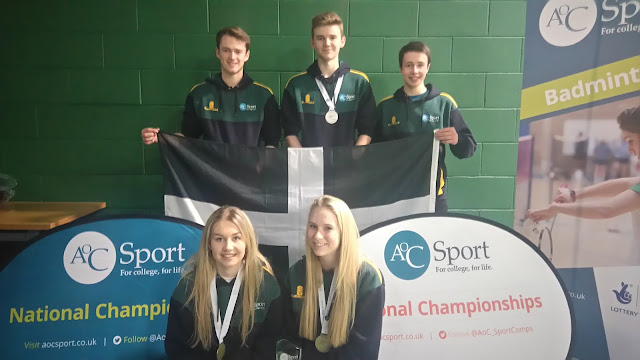 This meant a 1200 mile round trip to compete at Northumbria University. The  players competed at  the nearby  Tyneside Badminton Performance Centre ,built to International competition standard in 2013.
The Players Milo Semonin (St Austell). Amy Polglase (Hayle). Kellen Moore(Camborne). Noah Semonin (St Austell) and Duncan Covey (Truro) have all developed through the Cornwall Youth Badminton organisation over the last 7/8 years, some from the age of 9 years old. As South West Regional winners back in November in Plymouth they took their place at the National Finals.
The competition was of a high class with players from England, Scotland, and Wales some of whom having represented their Country and a high percentage being experienced Junior and Senior County players from across the United Kingdom.
Amy and Kellen took the Ladies Doubles by storm, playing controlled dynamic doubles in all 6 matches. The Cornish Girls winning all matches in 2 ends with many close ends which required  making full use of their experience, calm nerves and no little amount of skill. National Ladies Doubles Champions ! A thoroughly deserved National Title after many years of training and competing across the Country.  Truro and Penwith College gaining its first ever individual National Badminton Title over the 26 years of this competition !
Milo had 3 other top class players in his opening group, Surrey, Lancashire and Worcestershire County players with High National rankings. Milo worked tirelessly and won through by a 4 point margin on a 3 way tie. In the semi-final a classic 3 ender against a Lincolnshire County player came out in Milo's favour. In the final Milo had a rematch against Ryan Quek from Worcester ranked 13 at National Senior Level, England U19 squad a high class opponent. First end was a nail biter going right down to the wire, Milo missing a game point at 15/14,just losing 18/16. The shot execution and court coverage of both players on a technical, tactical and physical level was breathtaking. The second end continued with long demanding rallies but eventually Quek ran out  a deserved winner 15/8.
A truely memorable final, Milo taking the game to his opponent and demonstrating what a fantastic developing talent he is, with more to come over the next few years. National Silver Medal !
Noah and Duncan started well in their Mens Doubles Group box winning 2 from 3 matches. Needing a win in their final match to progress to the semi-final they changed 8/5 up in the final end. Unfortunately the pressure told and they narrowly lost 15/10 against a Middlesex pair. They then competed for a final placing of 5/6 and in three great ends of badminton and ran out deserved winners against a Worcester Pair. A final 5thplace finish in the Nationals!
Team Manager/Coach. Jon Wotton - Truro and Penwith Badminton Academy
Personal thanks must go to Truro and Penwith College under the stewardship of Julie Penprase, the Sports Academy Co-ordinator who although recognising the high level of commitment that the players put in outside of College at both County and National competition level, ensures two coaching sessions a week at College are provided. In addition she ensures full support in the logistical challenge of competing across the Country in both Individual and Team College Badminton competitions.

Posted by Cornwall Badminton at 21:16