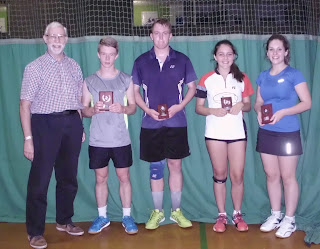 Cornwall’s badminton players converged on Polkyth Leisure Centre at the weekend to take part in the annual County Championships to find out the best players this year. The first day of the competition saw the men and ladies battle for the two singles crowns, as well as the ladies doubles event.
The ladies singles final came down to the top two seeds, Bronwen Wotton, and young Amelia Burrell who had just beaten the experienced Vicki Thomas in the semi-final. A closely fought final, with some lung bursting rallies, went to the wire with both girls winning an end each, before Bronwen’s finesse and all court game finally triumphed and she became ladies champion.
Twenty one men contested the singles event, once again with an excellent turn out of young players from Cornwall Youth Badminton. The top 4 seeds duly made it through to the semi-finals, although James Whetter had had to use all his experience to beat Ross Lashbrook in one amazing end which finished 30-28.
Both semis were tightly fought affairs, with top seed Liam Sillifant narrowly edging out James in a pulsating, see-saw match. In the other half of the draw the semi-final was between two regular young combatants, Tyler Sillifant and Milo Semonin, and this again went all the way to three ends of stunning defence and footwork, which Tyler won fairly comfortably in the end.
So the final was between the top seeds and the two brothers, Liam and Tyler. Younger brother Tyler repeated his excellent form from the previous weekend in the Duchy Senior Silver tournament, and finally beat Liam in two incredibly close ends, to become county champion for the first time. 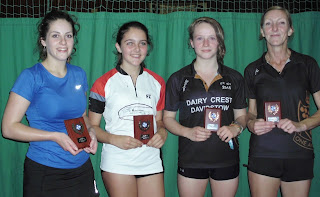 The ladies doubles event gave all 5 pairs the opportunity to play each other, with some promising young players gaining valuable experience. In the end, the clear winners were Bronwen and Amelia, who had paired up following their singles contest. Runners up were a new pairing of Vicki and Laura Galley, who had battled hard and only dropped two ends all afternoon.
The players returned the next day for the mixed and men’s doubles, and the large crowd were treated to more thrilling badminton to a high standard. 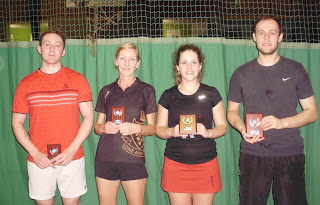 In the mixed doubles, the top two seeds made their way comfortably through the draw to the final which was an intriguing matchup of two established pairs, Ross and Bronwen against Lee Chapple and Vicki. Despite a never say die effort from the Penzance pair Lee and Vicki, they were no match for the power and precision of Ross and Bronwen in the end. This event completed Bronwen’s hat trick of titles and capped a fine weekend for her. 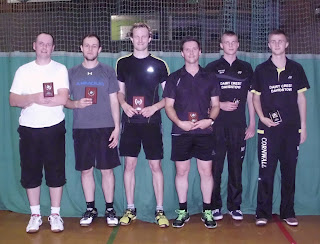 Sixteen pairs made up the men’s doubles, with some great skill and power play on demonstration from the players of wide ranging ages and experience. Once again, the 4 men’s seeds made it through to the semis, with Dave Harrington and Liam pushed hard by Steve Ellis and Chris Glasson in the quarters, and they were then beaten in two ends by top seeds Ross and Richard Townsend.
Competing against them in the final were the experienced pair of James and Nick Phelps who had seen off Sam Spencer and Tony Clarke in the semis. The final had some fantastic retrieving and speedy net play but in the end Ross and Richard’s power took them through to become county champions, and round off a great weekend of badminton. 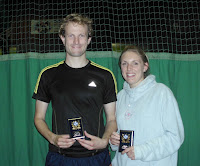 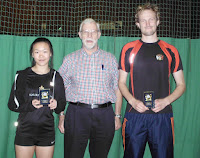 Posted by Cornwall Badminton at 19:37