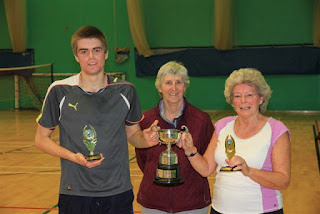 Saturday the 2nd of February saw the well established Newquay Cup badminton tournament played at the Newquay sport centre. The mixed event has benefited from being widened to include separate draws for both affiliated league and social players, resulting in the highest entry for many years with one box of 6 pairs in the social event and 3 boxes of 5 pairs in the league. 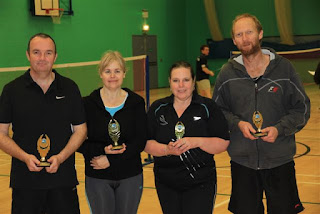 The social results were very close with just 19 points dividing the top three pairs. The experienced Martin Penny and Dee Frost managed to edge out their Camborne club colleagues Steve Knucky and Marnie Boston by just 4 points to take the runners up spot. However the event was won by the Camborne  husband and wife pair of Mark and Della Griffiths who dropped just 1 point from their 10 ends to win in convincing style, and is their second consecutive tournament win having triumphed in the 2012 West Cornwall Bonanza in Truro.

The league event was handicapped and saw a pleasing spread of players from various competitive clubs throughout Cornwall and Devon.

The Tecans (Pool) pair of  Steve Ellis and Kay Bossinger took all their ends, winning Group A by 7 points from the Mounts Bay pair and reigning champions of Lee Chapple and Hester Luke who also qualified for the semi finals as highest second placed pair. Group B was won impressively by Grandmother/grandson partnership of Jack Dyer and Jennifer Collins (First Edition), and Group C was won by the experienced Pair of Alison Philp and Andrew White (First Edition/Mounts Bay).

The semi-finals saw the handicaps reviewed for all and Lee and Hester produced their finest play with clinical and attacking play to account for Andrew and Alison in both ends. Jack and his grandmother Jenny again upset the odds by battling hard and defeating the much fancied pair of Kay and Steve by just 21-20, 21-20.

The final was a tense affair with around 40 people watching the spectacle. Jack and Jenny showed great patience and defence in the first end with good holding and net play and fantastic pick ups, and whilst Lee and Hester played solidly they were unable to reproduce their semi final standard and could not make up the 8 point handicap losing 21 – 15. The second end was a much closer affair and despite Hester and Lee taking it 21 – 20 the cumulative points meant that Jack and Jenny lifted the title from the reigning champions. The wining pair which amazingly spanned three generations, proved to be popular victors as the crowd acknowledged the tremendous feat of grandmother Jenny managing to triumph over her considerably younger opponents. 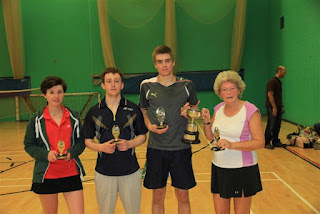 The event was well run, played in a great spirit and enjoyed by all. The organisers wish to thank the staff at the sports hall who kindly remained on in order for the matches to be completed.
Posted by Cornwall Badminton at 21:42