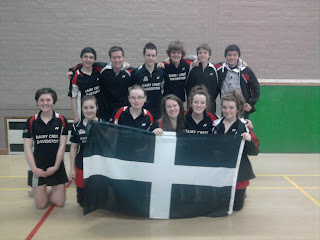 Cornwall U17s Badminton Team travelled to Amesbury, Wiltshire in a confident mood after a comprehensive win over near neighbours Somerset the previous weekend. The Duchy were looking to consolidate 4th place in the South West Counties League and also push for 3rd place when all final match results for the season are consolidated. An early start for some of our players, 6am from Penzance did not dampen the teams spirits. On arrival the team warmed up and soon got to grips with the challenges of the afternoon.

Seven of the Counties players were competing for the last time as Junior U17 County Players and were keen to finish in style. The girls simply blew away the opposition with 6 wins from 6 in the singles. Each player reaping the benefits of a season long fitness programme. The boys worked hard in all their games but failed to take the top 3 matches. Sam at no2 playing a tenacious match but ultimately just being narrowly beaten in two ends. Tony as always played a long patient game and finally took the third end 21-13. A great season of County singles for Tony. Kynan was simply too strong for his opponent at no5 and Christian took his last singles match for the County at No6 in 3 ends.

Into the doubles with a healthy 9-3 advantage. Again our girls proved too strong winning 7 out of the 9 matches. Our no1 pairing in their final County match Beth Wotton and Beth Rich continuing their recent good form with 3 straight wins in two ends. The boys kept pace and a relatively new pairing of Kris Jasper and Kynan Clarke took all 3 matches with some great attacking play. Sam and Christian took 2 matches but the match of the day was to be played between the Wiltshire no1s against Tony and Chris Grout. End to end attack, long rallies left it one end all. Into the final end and what a game it was! The final score going to sudden death at 29-29, a nail biting final rally saw the Wiltshire pair take it 30-29 !!! An incredible match warmly applauded by all spectators and all players stopping their own matches to watch the closing points from 20-20. Spectacular badminton !!!

The score read 23-7 in the Cornwalls favour going into the mixed. Beth Wotton and Kris Jasper winning in 3, taking the 3rd end in fine style 21-13 at no1 Hannah and Chris Grout going to 3 ends at no2 but unable to take the last end losing 21-15. Beth Rich and Tony at 3 won in style in two ends. Abi and Sam were comfortable winning in two at no 4. Hester and Kynan after a slow start won well, winning the 3rd end 21-9. It was left to Rachael and Christian to finish the match at no6 with vocal support from both sets of players and spectators adding to the atmosphere. A comfortable win in two ends saw a final scoreline; CORNWALL 28 WILTSHIRE 8.

County badges were awarded to Hester Luke, Rachael Collard and Kynan Clarke on representing their County for the 3rd time this season.

A final thank you to all parents who have unstintingly supported our players and the team over a long season, taking players to numerous tournaments, a significant number out of Cornwall, in order to gain invaluable experience.

The overall performance of the Team has surpassed expectations and completely transformed the counties South West position. We wish the following players good luck in their future badminton careers as they move into the County 17-21 age group and Senior County from September; Sam Spencer, Tony Marshall, Chris Grout, Kynan Clarke, Christian Jasper , Beth Wotton and Beth Rich. Tony, Chris and Beth Wotton having represented Cornwall at 3 age groups, Under 13-15 and 17.

Training now continues for two final weeks for all of these players as they prepare for our final event of the season. Ten players will be competing in the National Harrod Inter Counties Tournament over 5 days at Nottingham University between 17-21st April. Here they will compete against the Countries very best players of both National and International standard.