Cornwall U17 Badminton Team travelled to Nottingham University on Sunday 17th April to compete in the Annual National Inter Counties Tournament (ICT). This was the culmination of 12 months training and competing by the players who were aiming to move Cornwall up the National Inter County rankings. 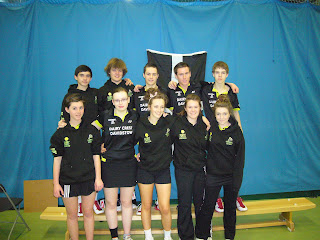 At 12 midday on the Monday the Team commenced 4 days of intensive matches against a top 10 seeded team from Hampshire. Overall result 9-1 to Hampshire but every player competed, and notched up a very respectable overall points tally. Next followed Staffordshire, another highly ranked team. A score of 7-3 against Cornwall did not reflect some great individual performances and a 5-5 draw was on the cards at the midway point of the match. The final match on day one was another hard encounter taking on Nottinghamshire. Another scoreline of 7-3,but again great performances and an outstanding mixed doubles win for Chris and Hannah in 3 ends of nail biting rallies. Our boys pairings of Sam and Tony and Kris Jasper and Kynan both winning exceptional matches.

Day two started early with a match v Middlesex. The standard of play was high on both sides of the court, Tony having a magnificent 3 ends of singles losing narrowly in the third. Final result 9-1 Middlesex, but again the team were always running their higher fancied opponents close in each match. Oxfordshire followed and a 10-0 score reflected the exceptional talent of some of the Oxfordshire boys, our girls going so close, Abi missing out on a fantastic effort in her singles. Both our boys were matched against Gold standard singles players and Sam at no1 and Kris at no2 were exceptional, working tirelessly to increase our teams points tally. Both players producing some incredible rallies of speed, agility and technical ability.

Day Three took the team to a different venue within the City. What a start is was, a must win game to move up the rankings, paved the way for some outstanding performances, notably Kynan in his singles. However a true “team” performance resulted in a 7-3 victory for Cornwall. This was immediately followed by a nail biting match v Isle Of Man. Cornwall losing out 6-4,but a determined performance by Tony and Sam coming back from one end down in the doubles showed that there was still more to come from our team.

The team regrouped and arguably gave their best team performance of the competition, defeating Norfolk on a 5-5 count back, the opposition not expecting such an outcome. Every player gave 100 % Beth Rich winning a monumental singles.
The last day saw a “local” derby v Wiltshire and the team were determined to reverse last seasons ICT result against the same opposition. The girls stepped up to the mark ,with our Bethanys winning their doubles and Hannah and Hester likewise. Beth Rich again delivered in her singles. Kynan won a hard fought singles in 3 and both our mixed pairings of Chris and Beth W and Hannah and Tony won.
A scoreline of 6-4 in Cornwalls favour.

The teams final position of 34 moved the county off bottom place up six places and into a higher grouping. A fantastic achievement winning 3 matches ,competing against the very best players from across the Country and some outstanding badminton by our youngsters.

The team returned to the University to watch the early stages of the final, Warwickshire v Cheshire, watching the England no1 boys singles champion in awe inspiring form.

A long trip home resulted in our last few players returning at 2am to Penzance after the 320 miles !!

Very many thanks to our main sponsors “Dairy Crest Davidstow”, the players wearing their shirts and hoodies with immense pride throughout the 4 days.

Thanks also to all local outlets, supermarkets across the county who supplied sports drinks and energy bars for our players.

2012 promises to be another challenging year at the ICT but the bar has been raised and it is intended to rise to the challenge !!