Due to the flu virus taking its toll, we only had the bare minimum number of players to do battle against Surrey, Sussex, Devon, and Oxford.

There were 4 matches on each of the 2 days, - playing each of the 4 teams twice. This ensured plenty of games for all and it was decided to give all 8 Kernow players the opportunity to play alternate disciplines (mixed and level doubles) in each match. Our early start on Saturday morning enabled most of us to get some well earned retail therapy in at the nearby out-let centre before the afternoon games!

Expectations regarding our chances of winning were……….realistic, and over the two days there were some gutsy performances and several very close encounters where honours were shared with the opposition. The overall tally was:
Played 8 Drawn 5 Lost 3 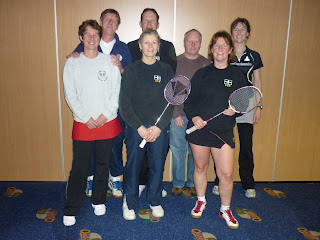 Team picture (minus Pete who took too long in the shower!)
Posted by Cornwall Badminton at 22:47