The county over sixties team found going tough at the Yehlex Inter County Tournament at Hatfield during the weekend of 8th and 9th January.
During previous seasons they have played in league division I but because of their success last year at Swindon were promoted to the premiership.
With four matches on the Saturday and two on Sunday their limited achievements came via winning games from Pat Edwards partnering Celia Hillman and Mike Nancekivell accompanied by Brian Hannibal. Mike also won an end playing alongside Pauline Avery who was deputising for Chris Marr. 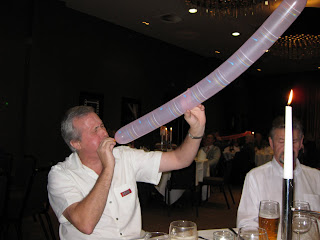 Team Captain Brian (pictured above!) always knew it would be difficult and that play would be at a standard not previously experienced. He is now looking forward to a full side being available for their next league match against Devon at home on 23rd January.
Posted by Cornwall Badminton at 07:50