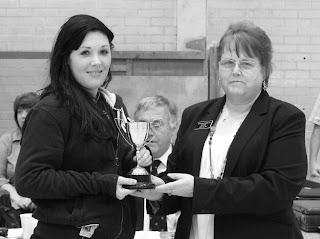 Rachel and Chris take the Singles title’s at this year’s Cornwall Open.

Yet another memorable and successful weekend was experienced at the Duchy of Cornwall 28th “Open” Badminton Championships. There was a record entry of 132 representing 21 Counties, for the Tournament, which was staged at its usual venue, Carn Brea Leisure Centre, Pool, Redruth, over the Weekend of September 18/19.

The first day’s play saw England’s number three ranked lady Rachel Howard of Hertfordshire seeded No. 1 for this Championships lift her first Cornwall Title by overcoming Hampshire’s Jo Dix in two very closely contested games. Soon afterwards Chris Hotchen of Gloucestershire lifted the Men’s Singles Trophy by outplaying Ben Muir of Hampshire in two straight sets. This was particularly pleasing win for Chris as he was the runner up at last year’s Open.

The Event, was celebrating its first year as a BADMINTON England “Silver” Ranking Tournament, (previously recognised as the Satellite series) with the prize-fund set at £1,260.

GRAPHIC SOLUTIONS - www.graphicsols.com - the Computer Company, from Farnborough, Hampshire, together with Exeter’s TAG SPORTS - www.tagsports.co.uk in conjunction with YONEX UK LTD, once again were the Tournament’s joint main sponsors.

Meanwhile, Nick Lake’s Countryman Free Inns Group, with its HQ’s at Piece, Carnkie, Near Redruth, together Dales Renault, based at Scorrier and Summercourt, were amongst the other generous sponsors, of the Championships, which are known as one of the most popular on the English Badminton Circuit.

The Championships had for the time an official photographer – Matt Allen of Matesca Photography who was extremely busy - capturing the winners and runner’s up being presented with their trophies and awards and also taking various action shots during the two day event.

Day One, the singles events:

In the Ladies’ Singles, Rachel Howard was successful with a straight sets win over Jo Dix, 21/9 21/18

In the Ladies Doubles event, the trophy was lifted by Tournament regulars Sarah Burgess and Kelly Holdway of Hampshire who beat Elena Johnson and Kate Lester of Middlesex in the final.

The final event of the Championships, the Mens Doubles Final was thoroughly enjoyed by the spectators which was extremely competitive and of a high national standard. The eventual winners were Michael Whitehouse of Berkshire and Will Hilton-Jackson of Sussex who beat Keith Cuncarr and David Edgar of Lancashire in three very tight games.

In the Special Awards, David Edgar (Lancashire) was the popular recipient of the Sporting Spirit Trophy, with Johanna Philp (Port Isaac) voted the Best Cornish Player by the Committee.

David on the referee’s console:

David Burgess, an experienced Referee, from Devon, was the official in charge of the play in the hall over the weekend.

Linda Collins expresses her thanks to the following for the most successful weekend:

The comprehensive review/results, will be published in the Cornish & Devon Press, as well as being posted on the Cornwall Badminton Website: www.cornwallbadminton.co.uk