The Cornwall Badminton team travelled to Bath University’s Sports Training Village at the weekend to take part in Badminton England’s Senior County Championships, and first up were Avon. 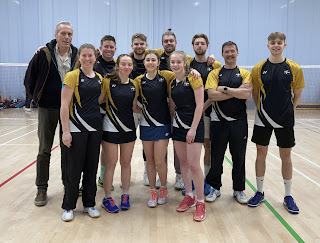 The Cornish singles players got off to a storming start with 4 out of 5 wins. Milo Semonin won in two comfortable ends, and all the others went to three with Harry Dyer, Cara Collins and Joanna Vyvyan winning, before a narrow loss in three for Jack Dyer. 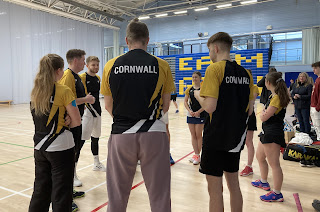 Tom’s team talk
Both mens doubles went the distance too, but Milo and Tom Lyle, and James Whetter and Elliot Dyer, the third Dyer brother on his debut, lost out to the Avon pairs. 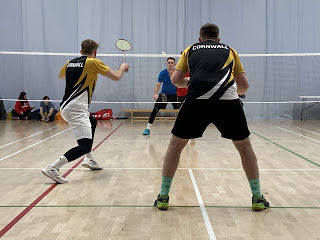 Milo and Tom back view!
Cara and Mollie Bailey put Cornwall back on track with a fine win in the womens doubles, but it was tough going for Joanna and Jess Canfield, playing in her first match.

The Cornish mixed doubles featured new pairings up against strong opposition, both losing to make the match score a narrow 6-5 victory to Avon. 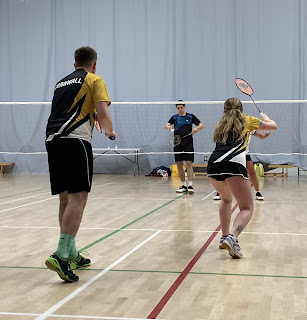 Another rear view of Jess and Tom in those socks
Next up were much fancied Gloucestershire, and once again Milo won his singles, this time in three ends. Harry pushed his talented opponent all the way in the top singles but just lost out setting in the final end, before Jack went down in three battling ends. 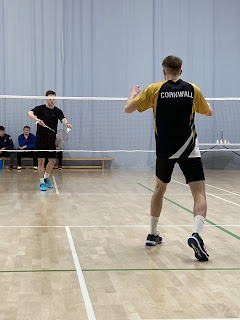 The back of Harry in action
It was a bit of a procession after that as Glocs dominated the doubles, although Cara and Mollie were desperately unlucky to lose their game settling in the third, and Tom and Jess took their opponents to three ends. 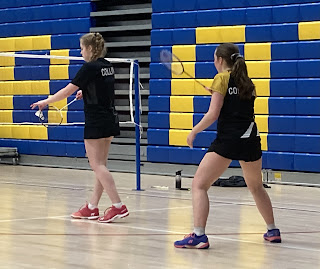 Side view of Cara and Mollie in action

A long, tough day in Bath, with the Cornwall players looking forward to the next challenge to come.